By Lance M. Bacon
A Marine swims with a pack during the 2nd Annual Tactical Athlete Championship aboard Marine Corps Air Station Miramar, Calif., Aug. 17. The competition was a part of the Marine Corps’ High Intensity Tactical Training program and tested the strengths and abilities of Marines from different installations around the Corps. (U.S. Marine Corps photo by Pfc. Liah Kitchen/Released)

The Marine Corps has crowned two noncommissioned officers as the service's top tactical athletes, and the pair is challenging every devil dog to take a shot at earning that title.

Cpl. Ethan Mawhinney and Sgt. Calie Jacobsen edged out the competition during last month's High Intensity Tactical Training Ultimate Tactical Athlete Championship at Marine Corps Air Station Miramar, California. It's only the second time the service has held the competition, which pits 32 active-duty Marines against each other during a grueling competition that combines tactical skills and athleticism that push Marines to their mental and physical limits. 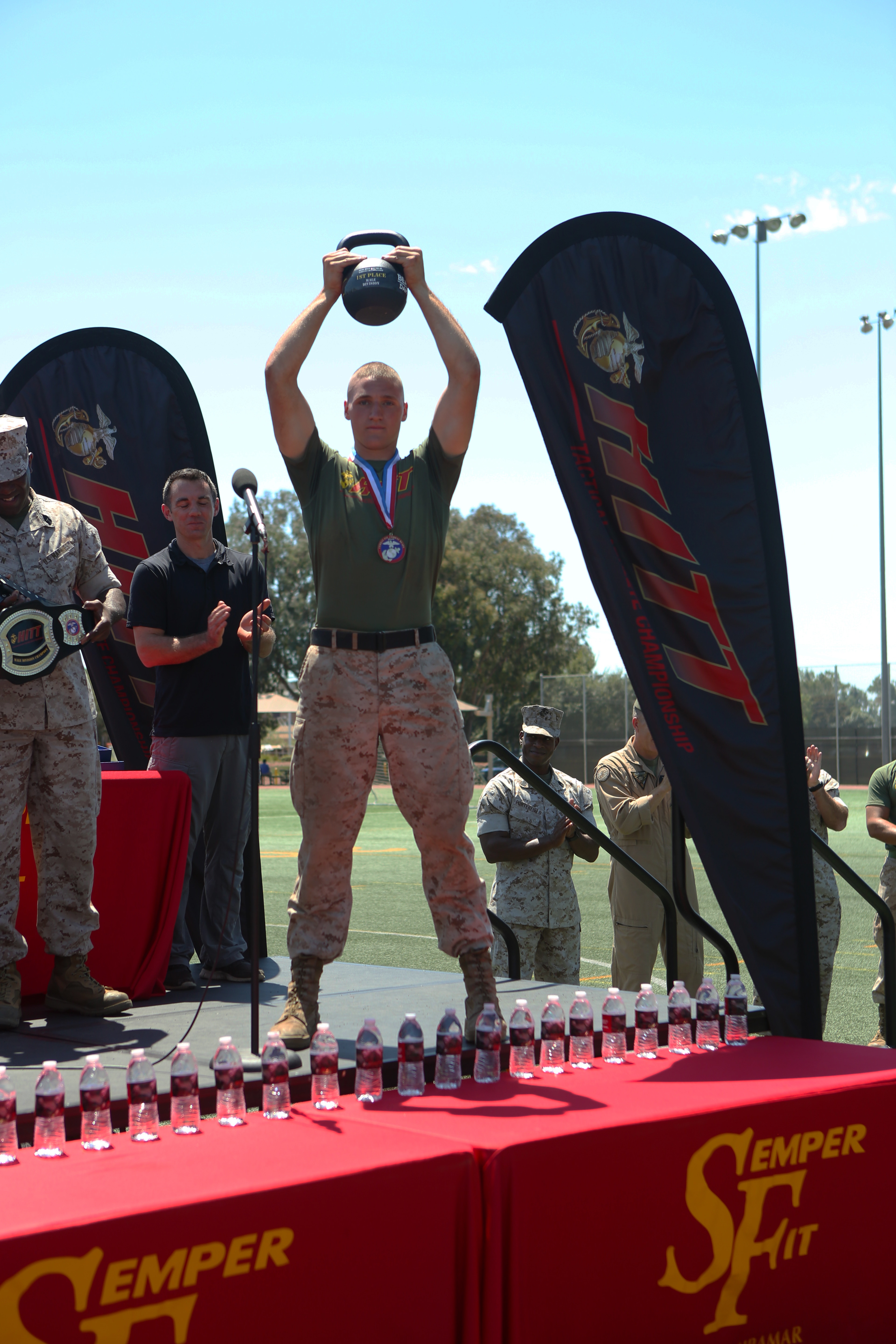 Cpl. Ethan Mawhinney, the top male competitor of the Tactical Athlete Championship, holds his trophy up during an awards ceremony aboard Marine Corps Air Station Miramar, Calif., Aug. 18.
Photo Credit: Pfc. Liah Kitchen/Marine Corps
The gauntlet includes events in five categories: The HITT assessment, a 300-yard power shuttle, a tactical hill climb, a virtual marksmanship test and a tactical fitness challenge. But there’s a catch: Competitors didn’t know which of 150 possible events would be graded until the day of the event.

This year’s winners shared their tips with Marine Corps Times, and talked about lessons learned that they will use to defend their title next year. The short version is this: Start training now.

Mawhinney, a Virginia-based Marine air-ground task force planner, competed in the HITT championship last year. After finishing in sixth place, he said he knew he needed to work on his speed and agility while increasing his weights in strength training.

He warms up with something specific each day, ranging from an Olympic lift to a box jump or max pullups. Once in the heart of the workout, diversity is the key as he targets movements in different parts of the body, often mixing calisthenics and weight training.

Mawhinney uses the same format but never repeats the same workout. He kicked it into high gear in March, with longer and more intense workouts.

The sergeant attributed her success to the assistance of the HITT program managers on her base who served as coaches, and helped her find the motivation to continue when she was growing tired.

In fact, both champions said their success was as dependent on mental, as it was physical strength.

When Jacobsen saw her competition, she said she was admittedly intimidated by the physical conditioning of her competitors.

The championship kicked off with the HITT assessment, a strenuous test of speed and agility, which she admits is not her forte. When she didn't place in the top three, she said she began thinking she may be out of her league. But if she was playing to win, she said she knew she needed to change her thinking.

The next few events focused on strength and endurance, which she considered her strengths. That motivated her to get back in the competition, where she found increasing success. By the end of Day 2, she was confident she would place. As Day 3 came to a close, she had her sights set on the championship. 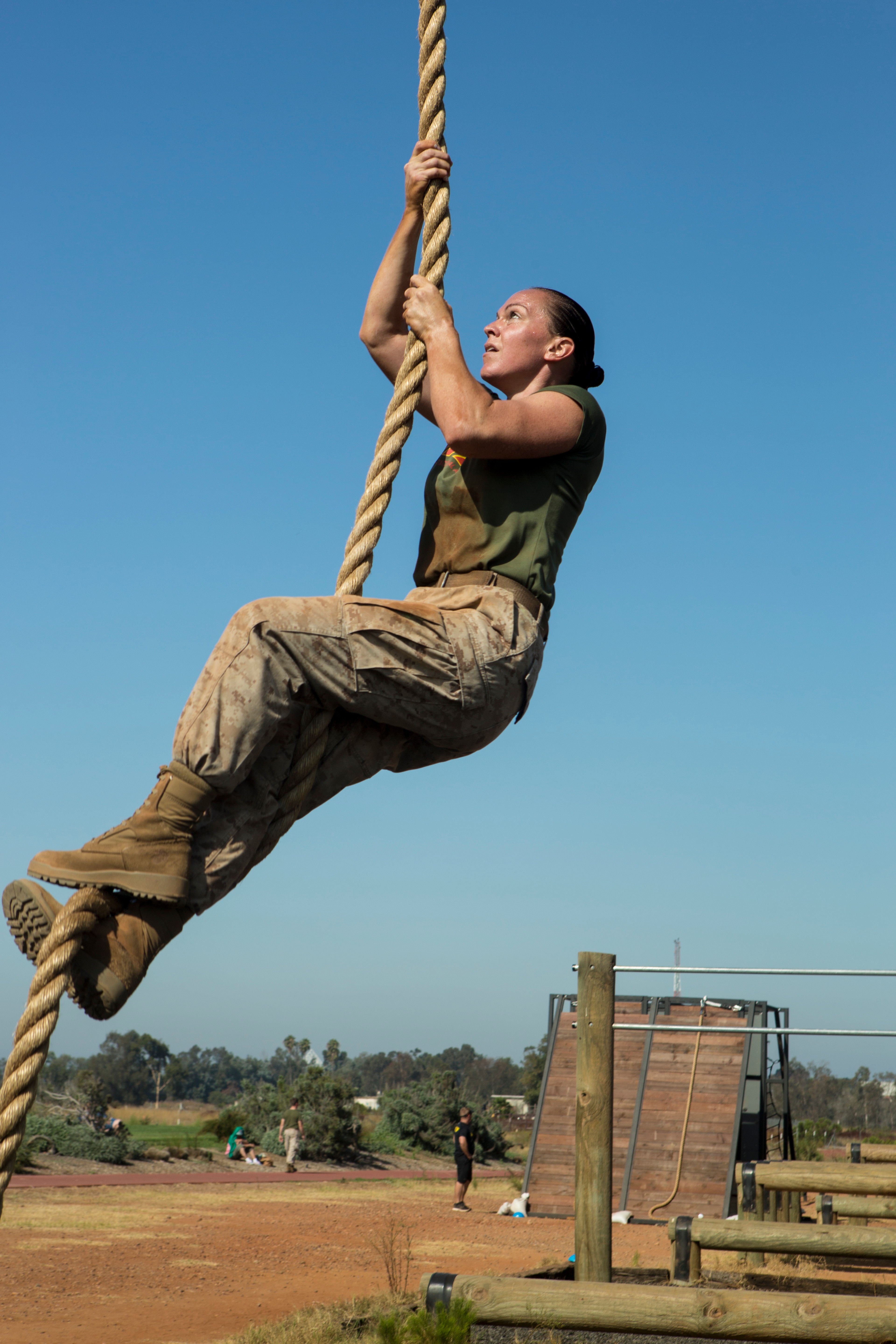 A Marine climbs the rope on an obstacle course during the 2nd Annual Tactical Athlete Championship aboard Marine Corps Air Station Miramar, Calif.
Photo Credit: Pfc. Liah Kitchen/Marine Corps
The final event was the modified obstacle course, and though she had the lead, Jacobsen said she wasn't taking anything for granted.

"I told myself ‘This is going to be a few minutes of extremely hard work – just push the whole time,'" she said. The plan paid off; Jacobsen won the event by three seconds.

"The competition was absolutely amazing," said Jacobsen, who recently reported to the sergeant’s course. "The females were in great shape and did a fantastic job encouraging and pushing one another."

Mawhinney’s focus was more inward than outward. His strategy was simple: Leave everything on the field.

"The main thing was to walk away without anything left in the tank," he said. "If I didn't come out on top, that just meant there was better competition out there and I had to work harder next time." 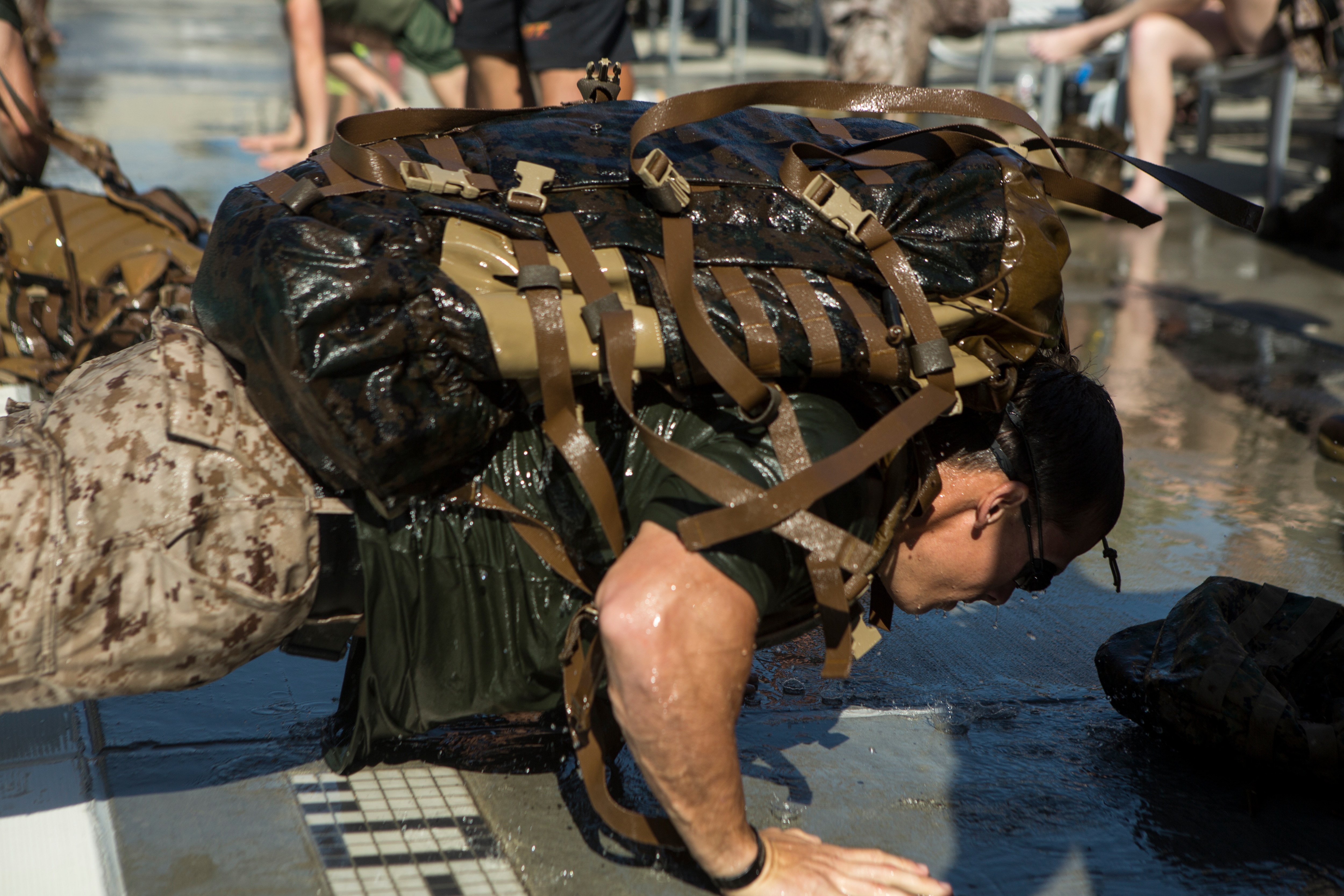 A Marine performs pushups with a pack during the 2nd Annual Tactical Athlete Championship aboard Marine Corps Air Station Miramar, Calif.
Photo Credit: Pfc. Liah Kitchen/Marine Corps
The corporal was tied for third place after the second event, and steadily worked his way to the front of the standings. He was tied for second going into the last event. As he waited his turn to run the modified obstacle course, the Marine in first place hit a time of 3:40, which broke the competition record by 10 seconds.

Mawhinney admitted that made him a little nervous, but the record-setting score proved to be exactly what he needed. He pushed himself to the max, and came in with a time of 3:15 — breaking the new record by a staggering 25 seconds.

After taking the title, Mawhinney, who has orders to Marine Special Operations Command headquarters, said he is already looking ahead to next year's competition. He's setting up his training plan, with greater focus on recovery. His advice to other Marines who train for the event is that they listen to your bodies, get adequate rest, have plenty of ice packs on hand, and be sure to work out tensions and knots.

"I am rolling forward," he said. "I don't want to stay where I am. I want to go out there next year and leave no doubt."