KHAZER, Iraq — Iraqi forces explored a network of tunnels and uncovered a bomb-making facility on Thursday in a village near Mosul that was recently retaken from the Islamic State group, offering a glimpse of the challenge they will face as they move closer to the city.

Ten days into the offensive, the special forces are still at least 4 miles (6 kilometers) east of the city and have faced stiff resistance, with IS firing mortars and machine guns, and sending armored suicide truck bombs trundling across the arid plains.

Once inside the small, sparsely populated villages that ring Mosul, Iraqi forces must contend with explosive booby-traps and hidden snipers. The fortifications are expected to grow even more lethally daunting once they enter Iraq's second-largest city.

The extremists captured Mosul in a matter of days in 2014, and have had more than two years to build up its defenses and brutally root out any internal opposition. The operation to retake the northern city is expected to take weeks, if not months. 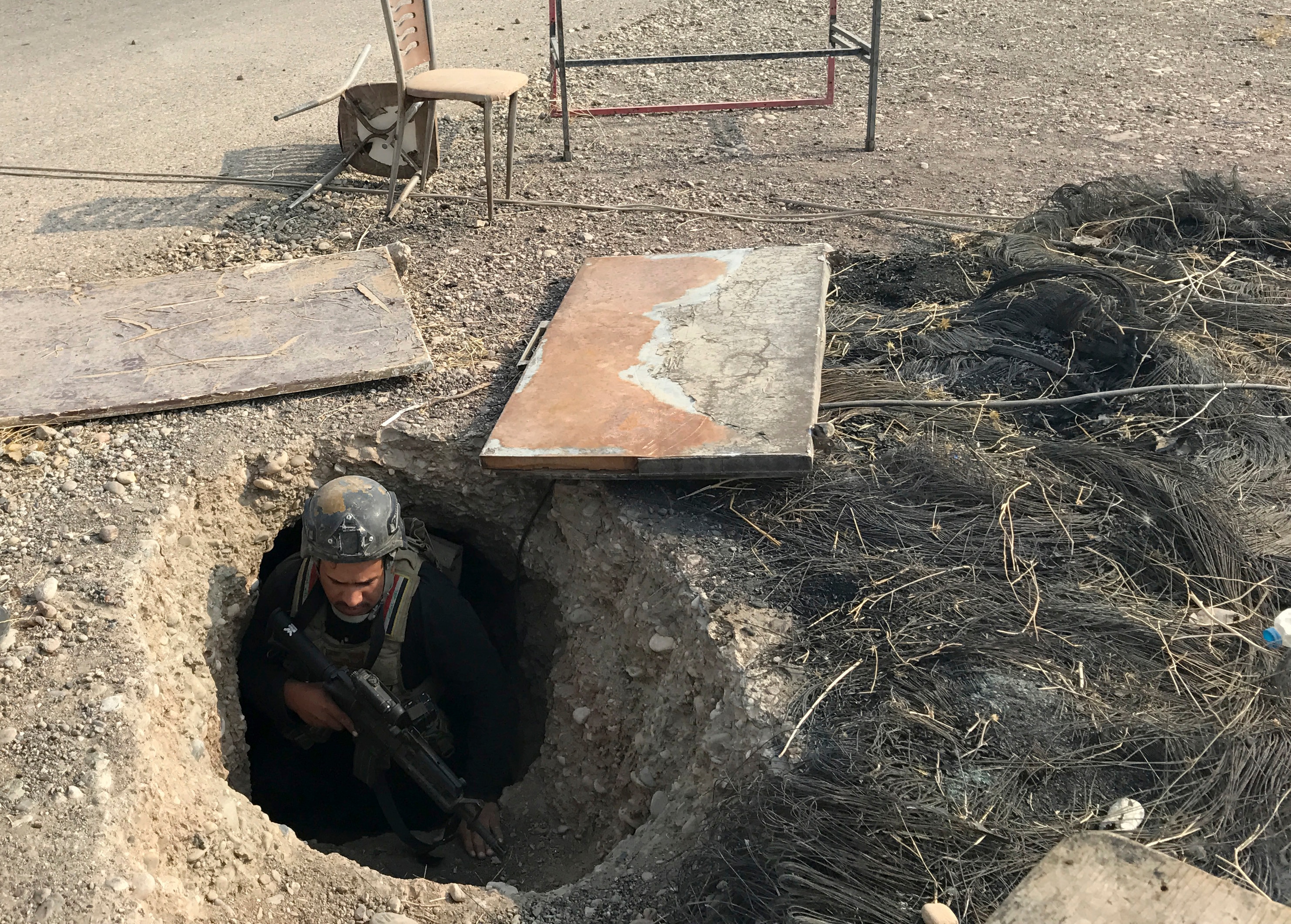 A soldier with Iraq's elite counterterrorism force inspects a tunnel made by Islamic State militants in Bartella, Iraq, on Thursday, Oct. 27, 2016. The village is just east of Mosul.
Iraqi forces approaching Mosul from the south, meanwhile, are still 20 miles (35 kilometers) from the city, and the special forces to the east said they will not push ahead until the other forces are able to tighten the noose.

Iraqi army Maj. Gen. Najim al-Jabori said forces south of Mosul retook the town of Staff al-Tut in the Tigris River valley on Wednesday, and said local tribal and militia forces have been deployed to protect the gains while his troops regroup for their next advance.

Special forces Brig. Gen. Haider Fadhil nevertheless insisted things were on track. "The operation has not been stopped and is proceeding as planned," he said.

During cleanup operations in the area of Tob Zawa, his men found a tire shop that had been converted into a factory for making roadside bombs and attaching armor to vehicles.

They also found a tunnel equipped with fans and lights that ran from beneath a mosque out to a road. Iraqi forces have found extensive tunneling networks in areas retaken from IS, which the militants used to elude U.S.-led coalition warplanes.

Many fear IS may resort to more brutal tactics as the forces converge on the city, which is still home to more than a million people.

The U.N.'s public health agency says it has trained 90 Iraqi medics in "mass casualty management," with a special focus on chemical attacks. The extremist group is believed to have crude chemical weapons capabilities, and Iraqi forces say they are prepared to encounter them on the battlefield.

The World Health Organization said that of the 700,000 people expected to flee Mosul, some 200,000 will require emergency health services, including more than 90,000 children needing vaccinations and 8,000 pregnant women.

The International Organization for Migration says around 9,000 people have fled so far. It's a relatively small number, but until now, the battles have taken place in small farming communities that were mostly abandoned.

A woman prays over a grave of a family member at a graveyard damaged by Islamic State extremists in Qayara, some 31 miles, 50 km, south of Mosul, Iraq, Thursday, Oct. 27, 2016. When IS overran Qayara more than two years ago, the extremist group began destroying headstones at the local graveyard, telling residents they were forbidden because they did not exist at the time of the prophet.

The United Nations' refugee agency is shipping tents, blankets and other aid from the United Arab Emirates to northern Iraq to help those affected by the military campaign. Soliman Mohamed Daud, a senior UNHCR supply officer, told The Associated Press that 7,000 units of the relief aid will be sent to northern Iraq starting Thursday.

It marks the first time that Iraq's largely autonomous Kurdish region has allowed federal forces to operate in its territory since the overthrow of Saddam Hussein, but the two sides remain deeply divided over the boundaries of the Kurdish region and the sharing of the country's oil wealth.

Ammar al-Hakim, the Shiite cleric who leads Iraq's largest parliamentary bloc, visited a staging area near Mosul on Thursday and held a joint news conference with Kurdish leader Masoud Barzani, hailing their alliance against IS.

"There's no doubt that this great security and military cooperation will be an important beginning and a window to address all the pending issues," al-Hakim said. "The liberation of Mosul will be the beginning of a new Iraqi reality, with more cooperation."

Tensions grow over Ukraine with the trading of threats

Russia on one side and Ukraine, the U.S. and its NATO allies on the other traded fresh accusations and threats.

The Bastion systems were moved to Matua, a deserted volcanic island in the middle of the chain.

US warns Russia as Kremlin talks about war threat in Ukraine

“The probability of hostilities in Ukraine still remains high,” Kremlin spokesman Dmitry Peskov said in a conference call with reporters.

Hundreds of veterans and service-affiliated personnel have drafted a letter to members of Congress and the Biden administration calling for action in the continued efforts of evacuating and resettling Afghan allies.

Putin’s statement came a day after he sternly warned NATO against deploying its troops and weapons to Ukraine.

We are part of a new national coalition called We the Veterans committed to harnessing the strengths of the veteran community and our military families to crowd out the appeal and impact of violent extremism and polarizing misinformation.

Kevin Rumph Jr., of Fairburn, Georgia, was ordered Dec. 1 to pay $2,041,733.62 in restitution and sentenced to 27 months imprisonment followed by three years of supervised release.

The deadline for some VA workers to get vaccinated passed two months ago.

Navy gears up for single physical fitness assessment cycle, and scored planks, in 2022