MANILA — Russian navy vessels arrived in the Philippines on Thursday for joint exercises as part of a drive for new security ties under President Rodrigo Duterte's revamped foreign policy of courting the traditional foes of Manila's top ally, Washington.

The guided-missile cruiser Varyag, accompanied by the fuel tanker ship, Pechenge, are on a four-day goodwill visit to the Philippines, the second port call by Russian warships in three months. 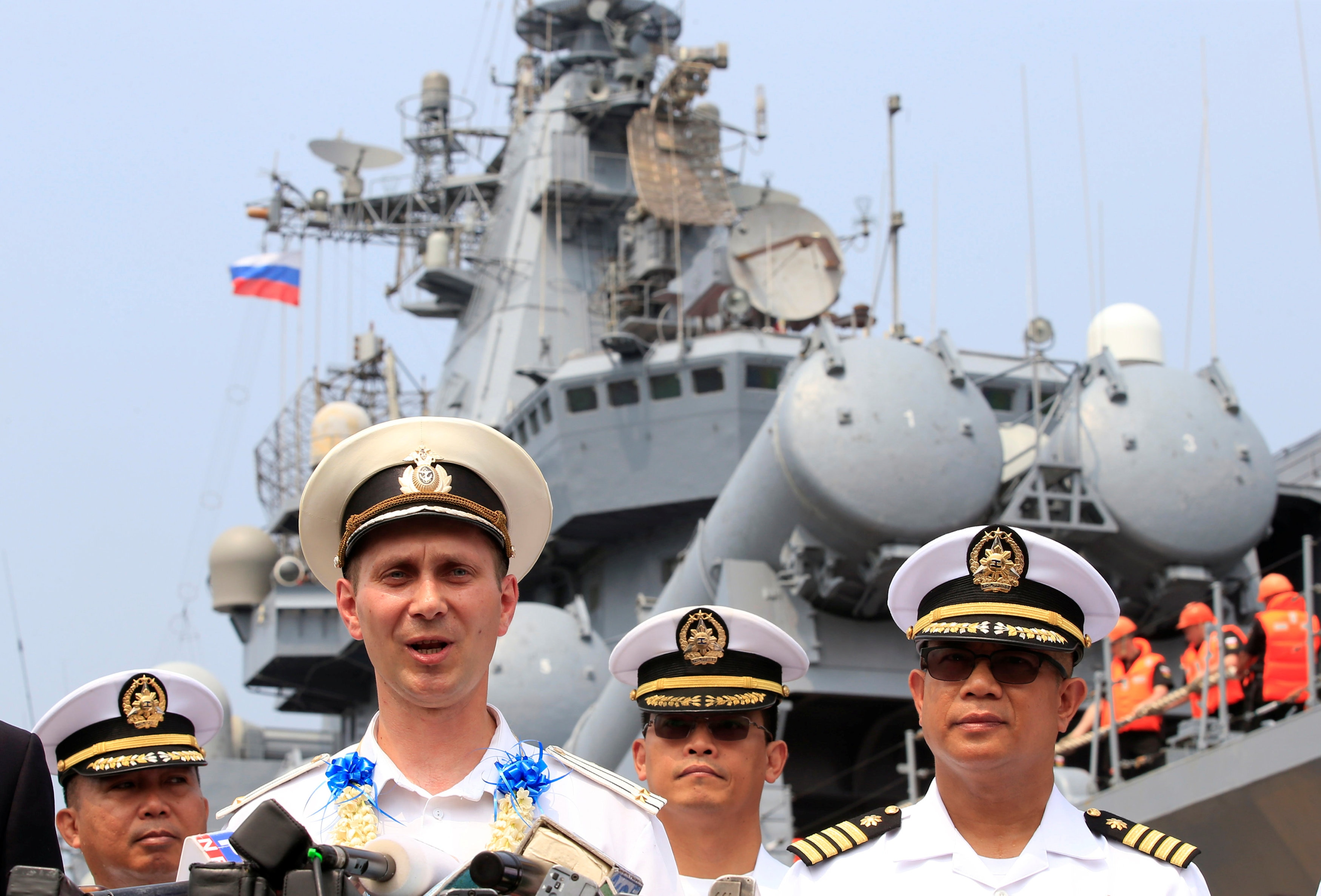 Russian Navy Commanding Officer Captain Alexsei Ulyanenko, of the guided missile cruiser Varyag, answers questions during a news briefing upon their arrival at Pier 15, South Harbor, Manila, April 20, 2017 for a goodwill visit to the Philippines.
Photo Credit: Romeo Ranoco/Reuters
The move is part of what Duterte describes as a pursuit of a constitutionally mandated "independent foreign policy." He has made no secret of his grudge against the United States and has made befriending Russia and China the priority of his diversification drive.

Captain Lued Lincuna, director of the Philippine navy's public affairs, said the Philippines hoped to learn from the Russians during training activities and a demonstration of advanced equipment and weapons systems.

The schedule includes training and sports activities with the flagship vessel of the RussianPacific fleet, plus a Russian concert in a park.

Russian commander Captain Alexsei Ulyanenko said the port call would make a "significant contribution" to strengthening relations and maintaining stability in the region. 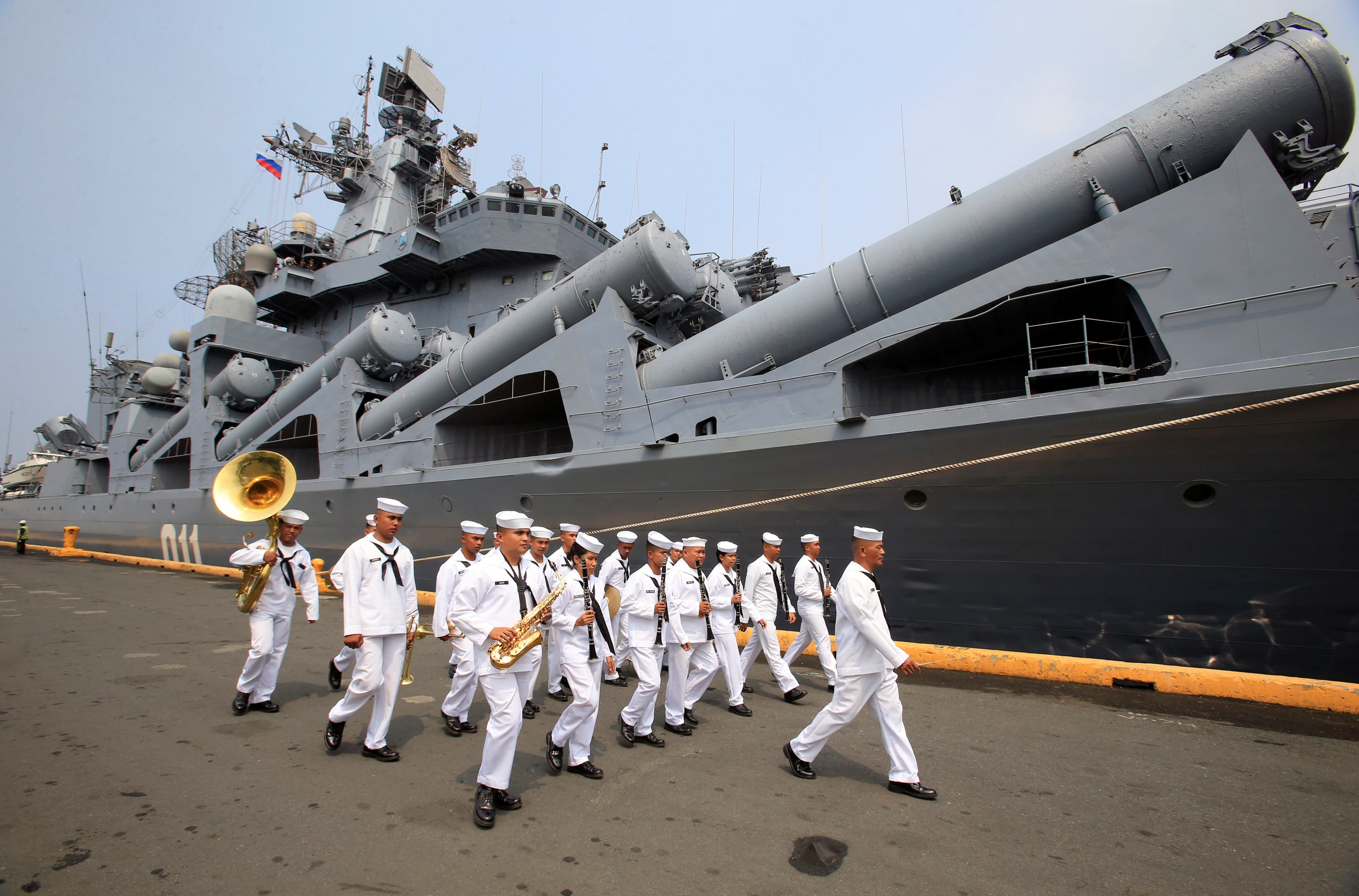 Russian Navy Commanding Officer Captain Alexsei Ulyanenko, of the guided missile cruiser Varyag, answers questions during a news briefing upon their arrival at Pier 15, South Harbor, Manila, April 20, 2017 for a goodwill visit to the Philippines.
Photo Credit: Romeo Ranoco/Reuters
Moscow wants to help Manila combat extremism and piracy, stepping up cooperation and training in areas where the Philippines has traditionally worked closely with its former colonial master the United States.

The relationship is expected to develop further next month when Duterte and Russiancounterpart Vladimir Putin witness the signing of defense agreements in Moscow.

When Duterte met Putin for the first time last year, the Philippine leader spoke at length about what he called U.S. "hypocrisy".

Duterte has instructed his defense minister to look into how the Philippines could acquire modern military equipment from Russia, like drones, night-vision gear, sniper rifles, and even helicopters.

US sending $275 million in military aid to Ukraine

Including the latest aid, the U.S. has now committed more than $19.3 billion in weapons and other equipment to Ukraine since Russia attacked on Feb. 24.

About 2,000 independent pharmacies coming back to Tricare

Other pharmacies still have time to rejoin Tricare network, but reimbursement rates are lower in the coming year.

The Army pulled a Rose and let Navy (Jack) drown in the Atlantic.

Midshipman on being Navy’s ‘Bill the Goat’ mascot: ‘Sure, why not?’

The Naval Academy's Bill the Goat is made up of a team of midshipmen.

Meet the cadet who serves as West Point’s mascot: ‘BlackJack’ the mule

BlackJack the mule is one of two mascots representing West Point.