Watch is the measure of the sailor’s day: their turn at the helm to do their duty. Many watches are uneventful and seem to last longer than the 3- or 4- or 5-hours​ shifts they’re scheduled to be. But others are breakneck and stressful.

And it is at the heart of the most popular  in the Navy Times slogan contest – "We’ve got the watch." These slogans were submitted by readers from Aug. 30 to Sept. 14 and were vetted by Navy Times staff. More than 6,000 voting on the best submissions, which were broken into categories. 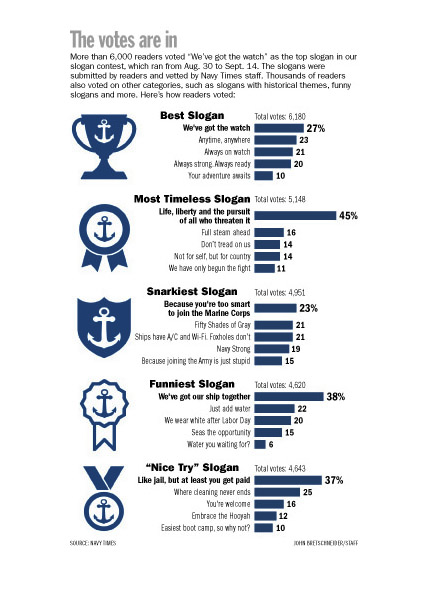 Navy slogan
Photo Credit: John Bretschneider
"This slogan came to me after hearing the poem ‘The Watch’ while attending a retirement ceremony with my husband," recalled Stephanie Seevers, a Navy spouse who was one of those who submitted the winning slogan. "It really stuck with me because standing watch is an important part of every job in the Navy." 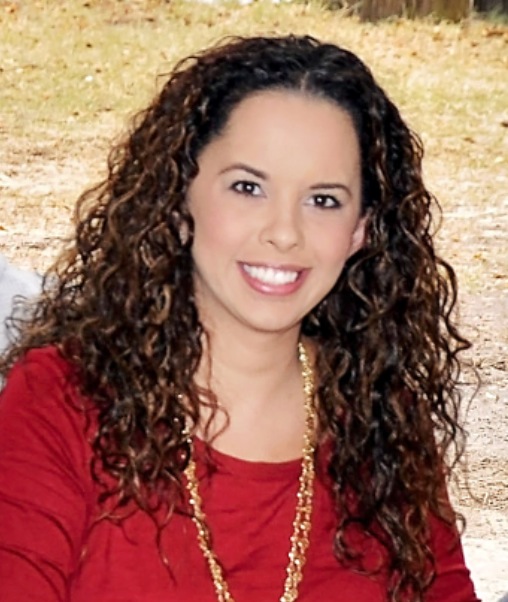 Stephanie Seevers was one of the readers who came up with the slogan voted most popular in the Navy Times contest: "America's Navy: We've got the watch." She said of the slogan idea: "While I loved 'A Global force for Good,' I was excited to try to come up with something new that embodied how the Navy never sleeps, and someone is always keeping watch to protect our freedoms."
Photo Credit: Courtesy of Stephanie Seevers

She added in an email: "I feel this slogan works because that is what every single sailor, be it enlisted or officer, is doing every time they step on board their ship, boat, shop, or plane, or when they have to leave their families for months on end. They are keeping us safe."

Tasha Sanders-Kerr is from a Navy family, including her grandfather, uncle, husband and sister-in-law. Asked how she came up with the slogan voted most popular, she replied: "It was just something that I was already thinking about as my husband was on watch duty."

Sure, your favorite slogan doesn’t showcase the excitement of past official Navy slogans, like "Accelerate your life," or "Let the journey begin." But it also harkens to the daily lives of sailors, whose days orbit

Another reader who came up with the idea said it just popped into his head, and stayed with him.

"It just popped in my head," HM2 Eloy Rodriguez said of coming up with the winning slogan, "I thought about frequently used phrases in the Navy."

The Navy’s recruiting slogan is typically geared to generating interest among young potential recruits. Thus the slogan generally highlights positives like travel and opportunities that will interest 18- to 24-year-olds, what Navy Recruiting Command calls their "what’s in it for me?" question.

The most popular slogan with readers differs from this approach in that it emphasizes the duties of service. That is similar to a recent Navy advertisement titled the "The Shield," which ends with the narrator saying, "To get to you, they’d have to get by us: America’s Navy." The ending epitomizes the call to serve for an America that still faces troubling threats at home and abroad, such as the rise of the brutal Islamic State group.

Marine Corps 2nd Lt. Carl Joiner said the winning slogan idea was inspired by his time at the Naval Academy. "There was always someone who was awake who I could rely on to keep me safe when I needed to rest," he said.

The best slogan in the "most timeless" contest category has a similar theme and captured a lot of likes: "Life, liberty and the pursuit of all who threaten it." This slogan was developed a decade ago by an advertising firm for the U.S. Navy and was used in some commercials, but never adopted as the official recruiting slogan.

Another reader offered a longer version of the winning tagline: "You can rest easy because we've got the watch."

Capt. Bob Hein said he came up with the winning slogan after hearing the poem "The watch," at a retirement ceremony. "I figured that is really what the Navy is all about, we stand the watch, so the rest of America can rest easy."

The phrase is particularly apt for Hein. A surface warfare officer who has commanded two ships, Hein said that both of his sons had followed his footsteps and become SWOs.

"Soon I will step aside and my sons will have the watch."

Cmdr. Brett Johnson has been temporarily reassigned to the staff of Helicopter Sea Combat Wing Atlantic.

CTF-150 is one of four task forces now operating in the Mideast to counter maritime threats.

Dr. Lewis M. Duncan, who was put on leave following the 2020 incident, has since retired from the post-graduate college.

The more the Navy experiments with unmanned systems, the more it's learning what it needs — and what it doesn't.

Putin complains about barrage of cyberattacks

Putin charged that “an outright aggression has been unleashed against Russia, a war has been waged in the information space.”

The U.S. is sending Ukraine another $100 million in military assistance, including heavy artillery and counter-artillery radars, the Biden administration announced Thursday.

The 1960s-era design continues to transform.

Currently the VA inspector general cannot force former employees to detail problems or crimes they saw during their tenure at the department.

Putin complains about barrage of cyberattacks