Rising oceans will swallow parts of the world's biggest naval base by the end of the century, according to experts who warn that it will take billions of dollars in upgrades to prepare these facilities.

Naval Station Norfolk in Virginia and 17 other U.S. military installations sitting on waterfront property are looking at hundreds of floods a year and in some cases could be mostly submerged by 2100, according to a new report from the Union of Concerned Scientists. Based on these calculations, the report says a three-foot sea level rise would threaten 128 U.S. military bases, valued at roughly $100 billion.

Nine of those bases are major hubs for the Navy: In addition to Norfolk, flooding threatens Naval Station Mayport, Naval Submarine Base Kings Bay in Georgia and the Naval Academy in Maryland, where 2003's Hurricane Isabel flooded classrooms, dormitories and athletic facilities.

It's not just the Navy. Marine Corps Recruit Depot Parris Island is at risk of being completely underwater. All told, three Marine Corps installations, two joint bases, an Air Force base and a Coast Guard Station are also at risk of daily flooding, the report said.

Those are the findings of a study released Wednesday by the scientific non-profit organization, which has published research into climate change, fuel efficiency standards and the use of antibiotics on livestock.

Some installations, including those in the Hampton Roads, Virginia, area, already have measures in place to protect against storm surges, study authors told Navy Times.

"There are lots of things that can be done and all of the things require quite a bit of resources," climate scientist Astrid Caldas said in a Thursday phone interview.

The Defense Department is taking the research under advisement.

"DoD values the UCS's insights into the impacts of climate change on military installations," Air Force Lt. Col. Eric Badger told Navy Times. "We welcome their report and its findings. We recognize climate change impacts and their potential threats represent one more risk that we must consider as we make decisions about our installations, infrastructure, weapons systems and most of all, our people."

The study began as a look at the effects of heavy storms on coastal bases, but the scope expanded as they got deeper into the issue​.

"We were surprised at how much permanent inundation occurs," Caldas said. "Originally we were focusing on hurricane storm surge. When we decided to do tidal flooding, that’s when it hit us."

That original goal is the reason the study focused on East and Gulf Coast installations, because the West Coast doesn't have regular tropical storms.

"Knowing what we know now about tidal flooding, looking back it would have been good to include the West Coast," Caldas added.

The findings could also apply to military installations overseas, she said, though parts of Alaska and some Pacific Islands are actually seeing a reduction in sea level.

"Most likely the majority of the coasts around the world will see sea level rise," she said.

Using two scientific models, experts from UCS examined installations from Maine down to Florida and over to Georgia, finding them all subject to more frequent and extensive flooding. Ocean rise makes areas close to sea level more exposed to the daily comings and goings of tides, up to and including parts of bases staying completely under water, and disastrous flooding from storms.

"These climate-driven trends are already complicating operations at certain coastal installations," according to the report. "A roughly three-foot increase in sea level would threaten 128 coastal DoD installations in the United States (43 percent of which are naval installations, valued at roughly $100 billion) and the livelihoods of the people — both military personnel and civilians — who depend on them."

That figure, precisely 3.7 feet, is a conservative estimate of the amount of worldwide sea rise the Earth will see between 2012 and 2100, per the 2013 National Climate Assessment. That "intermediate" model assumes moderate ice sheet melt, with a 1.1-foot rise by 2050.

"By 2050 in both scenarios, sea level rise drives early instances of land loss — defined in this analysis as land that floods with daily tides, making it unusable," according to the report. 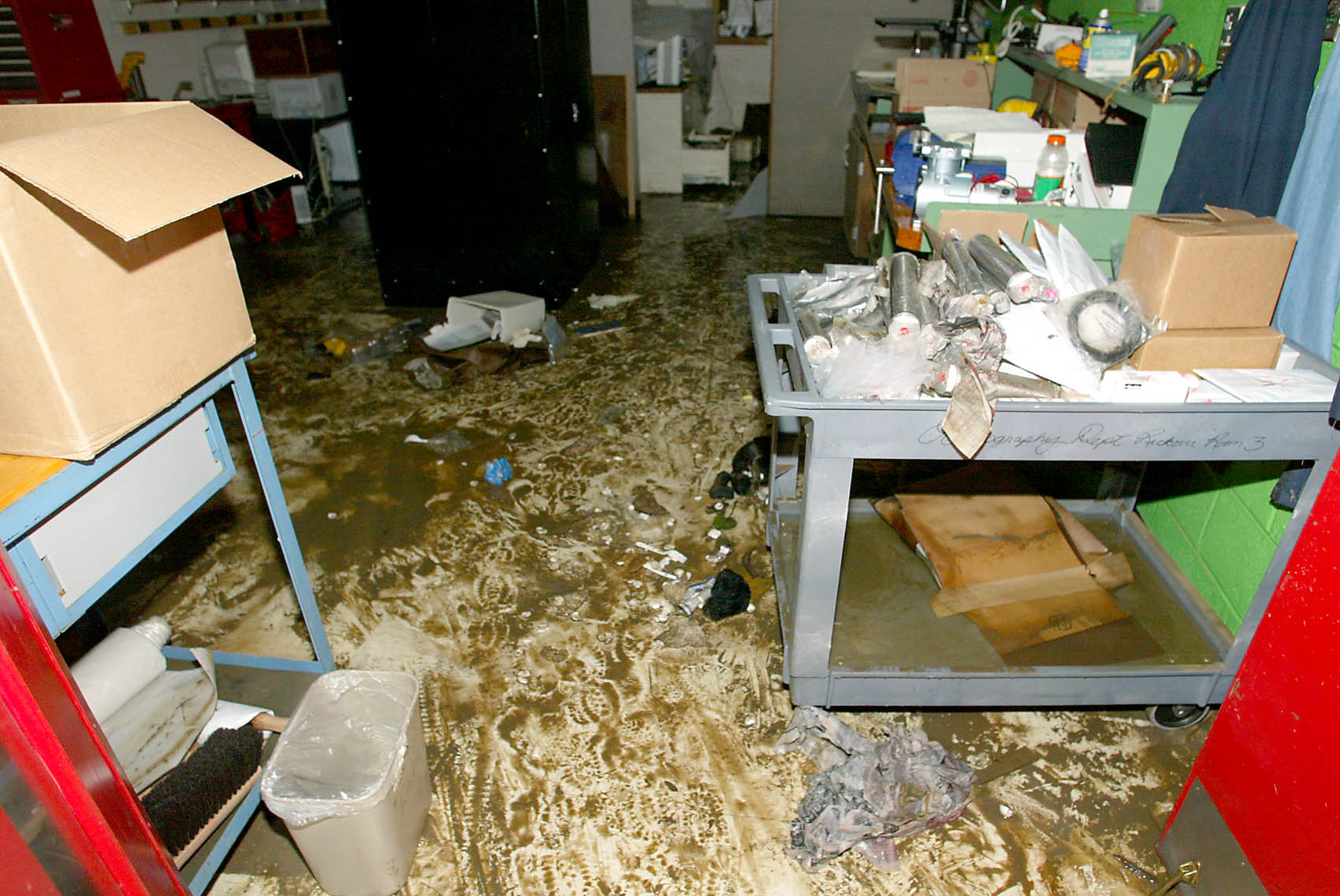 Hurricane Isabel flooded classrooms and laboratories at the Naval Academy in 2013. A new report warns that Annapolis and 17 other military bases could contend with hundreds of floods a year by 2100.
Photo Credit: Matt Houston/AP
Sixteen of the installations studied would experience more than 100 floods every year and low-lying areas underwater for 10 to 25 percent of the year, the study found. Three installations would lose 10 percent of their land in the "intermediate" scenario and 25 percent in the "highest."

The Navy installations on track for daily flooding are:

The other branches' bases at similar risks to daily flooding:

By 2100, the report found, Key West, Langley-Eustis, Dam Neck Annex and Parris Island could be between 75 and 95 percent under water.

Langley-Eustis already has extensive flood protections, according to study author Shana Udvardy, who visited the Hampton Roads bases as part of her research.

"At Langley, [we] saw some of the natural defenses in place," she said, including a living shoreline, door dams to prevent surge, a pump to remove storm water from the base and a warning system linked to NASA storm tracking.

Dam Neck Annex, Caldas added, has a rock-filled sea wall covered in sand on its shoreline.

Raising buildings is also an option, Udvardy said, though it's harder with many of the historical buildings on military installations. Newer facilities like housing would be more straightforward.

But for some installations, there's very little space to allow for regular flooding or to move structures inland.

"For a place like Key West that’s facing up to 95 percent of permanent inundation, there’s not a lot of land to retreat to," Caldas said.

The four sailors were all assigned to the Mid-Atlantic Regional Maintenance Center in Norfolk, according to the NBC News report.

But the jobless rate for veterans has been below 3.0% for nine months in a row.