BATH, Maine — Naval aviator Thomas Hudner watched helplessly as a fellow fighter pilot's plane turned into a death trap after a crash landing behind enemy lines during the Korean War. The injured pilot was pinned in the cockpit, unable to escape from the burning plane.

The lieutenant did the only thing he could to help: He crash-landed his own plane, climbed out and tried to save his comrade, Ensign Jesse Brown.

"What Tom did is one of the greatest feats of bravery in any war," said Adam Makos, who wrote a book about the aviator called, "Devotion." 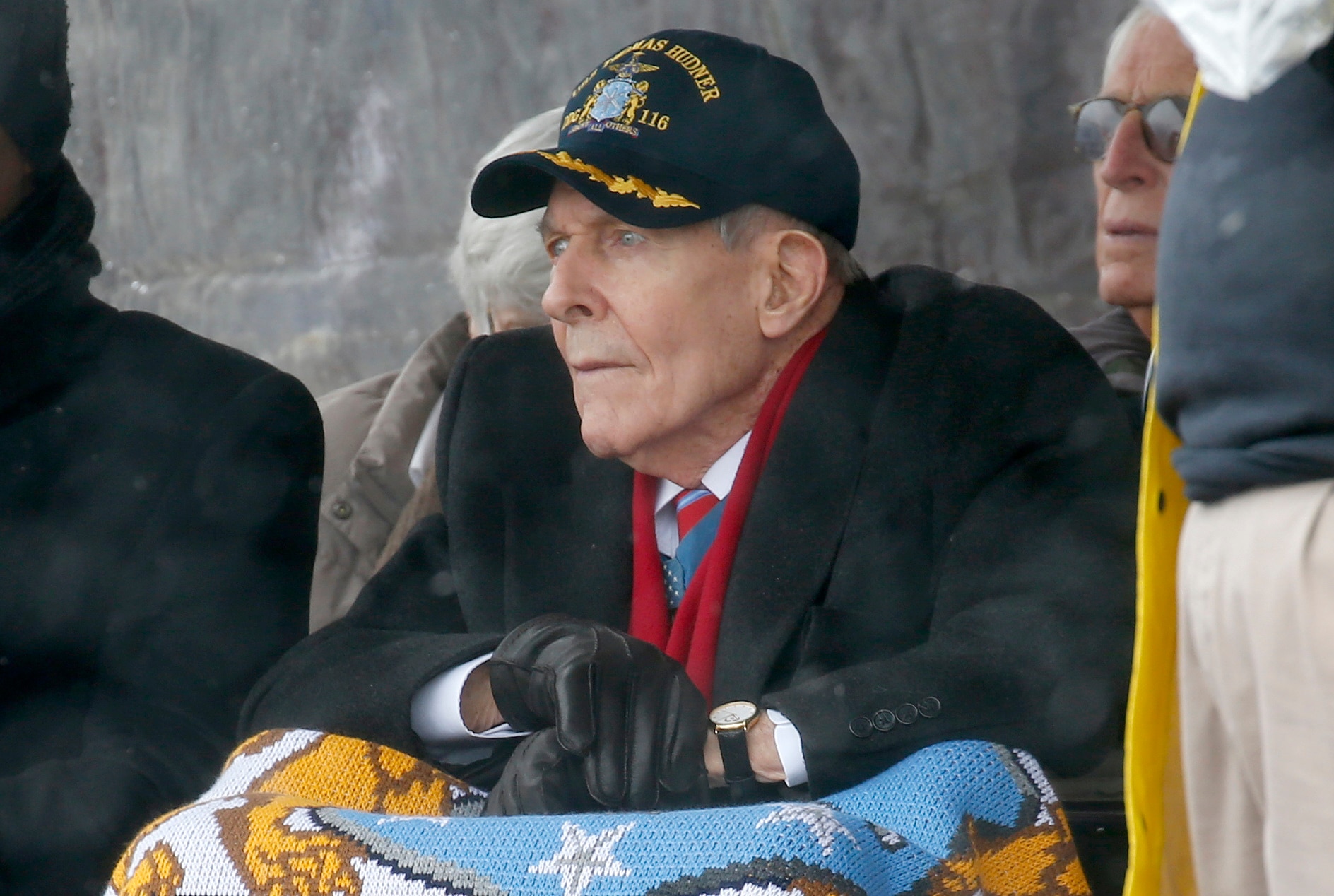 The wet and cold spectators included Hudner's wife, Georgea, one of the ship's sponsors, their children and other family members. Brown's daughter and two brothers were also there. Also on hand were two other Medal of Honor recipients, along with Marine Corps veterans who credited naval aviators for saving their skin during the Battle of Chosin Reservoir, where both enemy bullets and brutal cold claimed the lives of Marines.

"Without the fighter pilots, we wouldn't be here today," said John "Red" Parkinson, a Marine corporal during the battle who commented that Saturday's snowy weather seemed appropriate.

The ceremony celebrated heroism — and friendship.

This circa 1950 photo released by the U.S. Navy shows Jesse Brown in the cockpit of an F4U-4 Corsair fighter at an unidentified location.
Photo Credit: Navy via AP
Brown was the African-American son of sharecroppers in Mississippi who became the first black aviator in the U.S. Navy. Hudner, who's white, was a U.S. Naval Academy graduate and son of a well-to-do grocery store owner in Massachusetts. The two squadron mates hit it off despite their differences.

Fletcher Brown, one of Jesse's brothers, said both men were driven and loved to fly. "From what I know about Tom and what I know about Jesse, they were probably two of a kind. The only difference is one was wealthy and one was a cotton picker," he said.

On the fateful mission, on Dec. 4, 1950, the two flew from the aircraft carrier USS Leyte to protect outnumbered Marines who were encircled by Chinese soldiers. 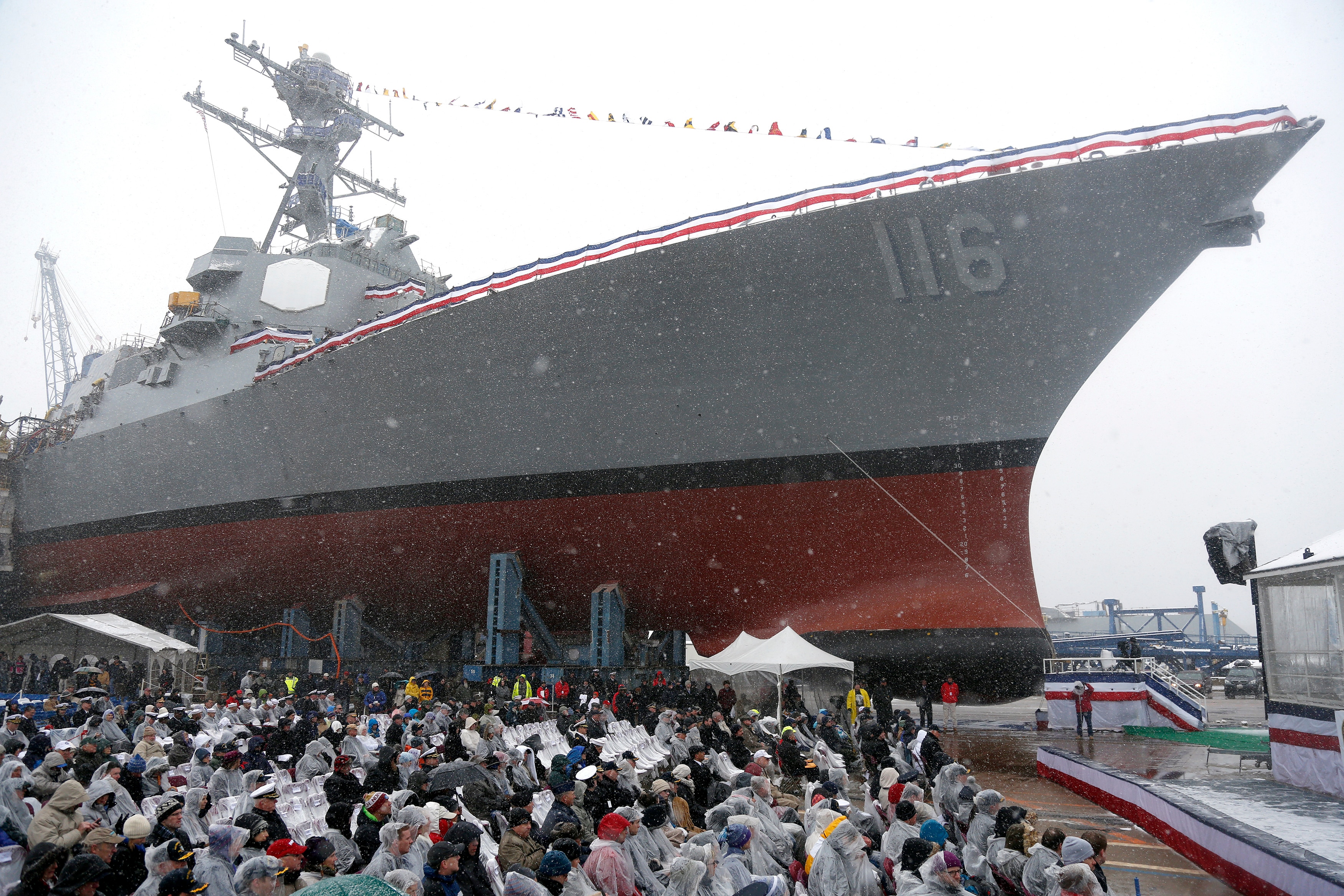 The future USS Thomas Hudner, a U.S. Navy destroyer named after Korean War veteran Thomas Hudner, looms over the audience during a christening ceremony at Bath Iron Works in Bath, Maine, Saturday, April 1, 2017.
Photo Credit: Mary Schwalm/AP
Brown's gull-winged Corsair began leaking oil after being struck by ground fire and he crash-landed on a snowy mountainside in enemy territory. Brown survived the hard landing but suffered injuries and was trapped inside the burning airplane.

Circling overhead, Hudner saw that Brown was unable to escape. So Hudner did a wheels-up belly landing in his own plane and ran to his friend's aid.

It was a race against time. If the crash injuries or the flames didn't claim Brown, then the bitter cold surely would. The temperature was just above zero.

There was no happy ending, however.

Neither Hudner nor the crew of a rescue helicopter could free Brown despite taking an ax to the plane. Brown lost consciousness.

"An aviator is calculating by nature and all he had to do was look around to know he wasn't coming home. That's when he glanced up at me and said his last words, 'Just tell Daisy how much I love her,'" Hudner said before the event, referencing Brown's wife.

Hudner promised to return and he did return years later. But Brown's remains were never found.

On Saturday, speakers praised Hudner's selfless act during the ceremony in which Champagne was broken on the ship's bow to christen the Arleigh Burke-class destroyer.

Hudner said he was just helping a shipmate. "If it had been me down there on the ground, Jesse would have done the same thing for me," he said.

Unclassified footage of Iran's tactical ballistic missile strikes on Al Asad airbase Jan. 8, 2020. No one was killed in the attack, but 110 people were treated for traumatic brain injuries. (Central Command)
Close
Now Playing