BATH, Maine — ­The USS Thomas Hudner, DDG 116, was christened April 1 in cold driving snow — appropriate for a warship that honors a Navy pilot who struggled in the freezing North Korean mountains to save a downed aviator and friend nearly 67 years ago.

A crowd of about 1,000 civilians and Navy personnel listened as guest speakers, including Allison Stiller, principal civilian deputy and assistant secretary of the Navy for research development and acquisition; two U.S. senators; and two U.S House members, praised Hudner’s bravery and the new ship and its crew.

"Thomas Hudner’s story is also Jesse Brown’s story," Stiller said. "What happened on that day will not be forgotten." 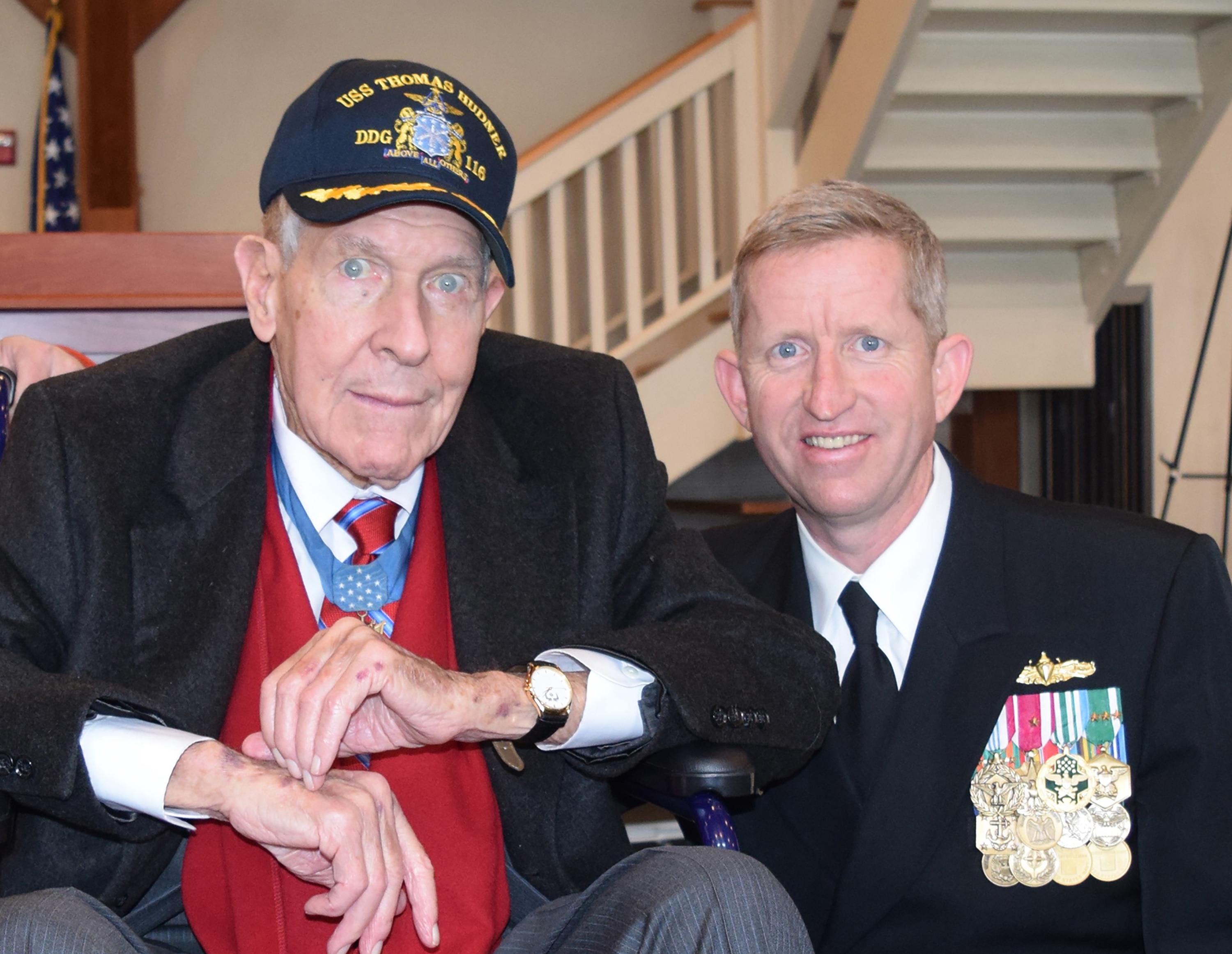 Hudner’s son, Thomas Hudner III, reminded the crowd that while the cold might be uncomfortable, it was nothing compared to what pilots and Marines on the ground endured. Temperatures Saturday in Bath were near freezing, but it was well below zero in the North Korean mountains that day in 1950.

"In comparison this is the tropics," Hudner’s son said. "We should take a moment to think about what they went through and be glad where we are."

In 1950, then-Lieutenant (J.G.) Hudner and Brown were part of a six-plane squadron flying close air support for outnumbered U.S. Marines fighting Chinese and North Korean troops in the Chosin Reservoir.

Hudner was Brown’s wingman when groundfire pierced an oil line in Brown’s plane, forcing him to crash-land on a mountainside about 15 miles behind enemy lines.

As his fellow pilots circled overhead, ready to drive off encroaching Chinese troops, Brown’s plane caught fire. He was trapped inside.

"The nose of Brown’s plane was bent in the crash," recalled Capt. William Wilkinson, now 89, a former Navy and commercial airline pilot who attended the christening. He flew with Hudner and Brown. "His right leg was pinned against a panel in the cockpit."

Seeing Brown alive inside his burning plane, Hudner intentionally ditched his own Corsair in a belly landing and ran through deep snow to Brown’s aid. Lacking a fire extinguisher, he threw snow on the engine to bank the fire.

He soon was joined by Marine Lt. Charles Ward in a Sikorsky rescue helicopter. Together they used a rescue axe to try and cut through the fuselage.

"Oh, they beat on that thing," Wilkinson said. "But it wouldn’t budge. The axe kept bouncing off."

Brown succumbed to his injuries and the cold. Hudner and Ward were forced to leave him behind.

Brown’s last words to Hudner were a message to his wife: "Just tell Daisy how much I love her." 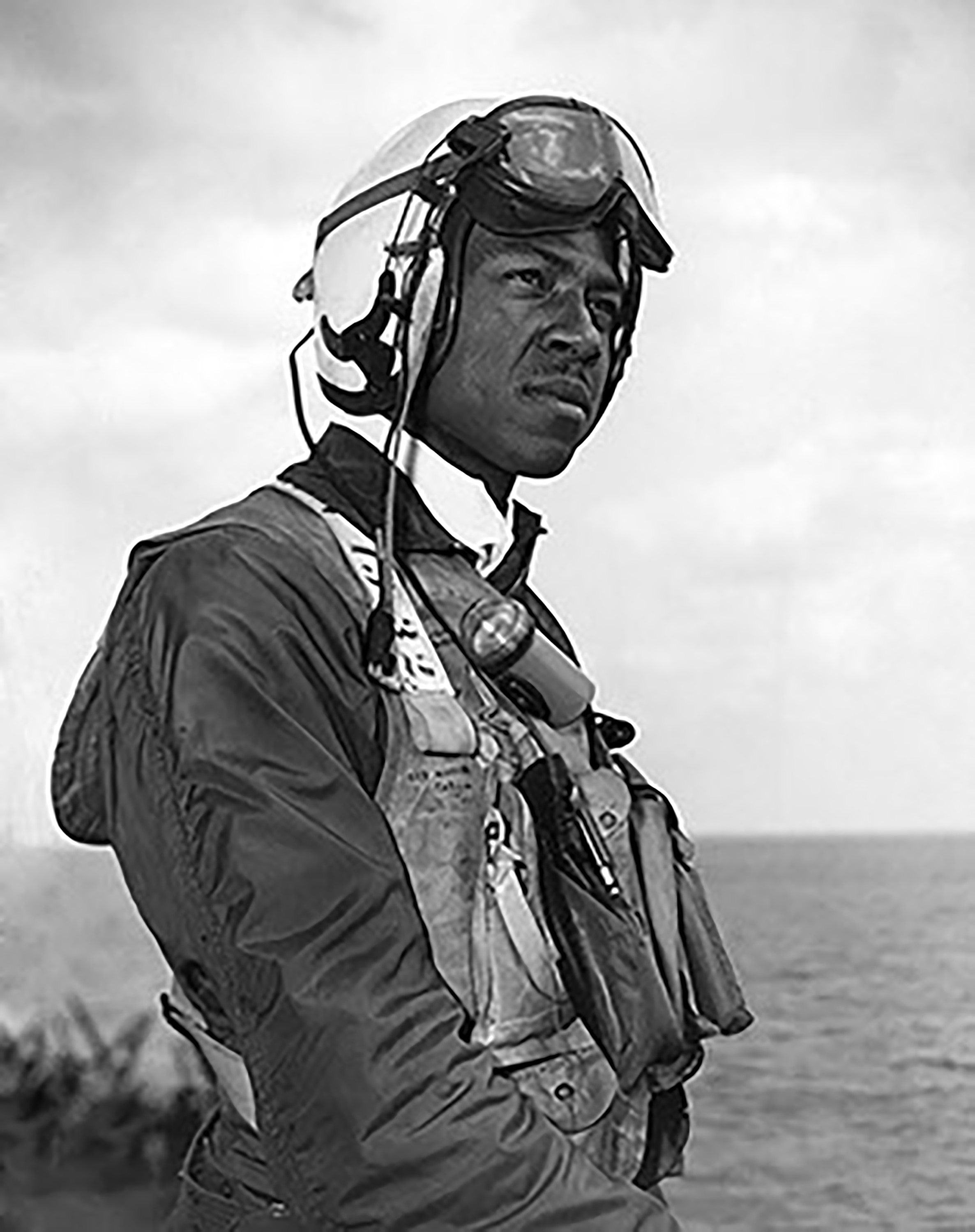 Ensign Jesse L. Brown's plane was shot down in the frozen mountains of North Korea.
Photo Credit: U.S. Navy
Recovering Brown’s body was too dangerous because of enemy forces. On Dec. 7, seven planes from the Leyte dropped napalm on the two crashed Corsairs, giving Brown a warrior’s funeral.

"What Tom Hudner did that day in North Korea had never been attempted before or since," Makos said.

Hudner and Brown were members of the VF-32 fighter group, assigned to the USS Leyte (CV 32), an Essex-class carrier. The ship joined Task Force 77 in support of U.S. and U.N. troops in Korea in October 1950.

Though friends, the two men could not have been more different.

Hudner, white, was raised in Fall River, Mass., and graduated from the U.S. Naval Academy. Brown, an African American, grew up poor in Hattiesburg, Miss., and entered the Navy through its V-5 college program at Ohio State University.

Hudner served with distinction in the Navy for another 22 years, retiring in 1973. He’s said he thinks of Brown every time he puts on the medal. 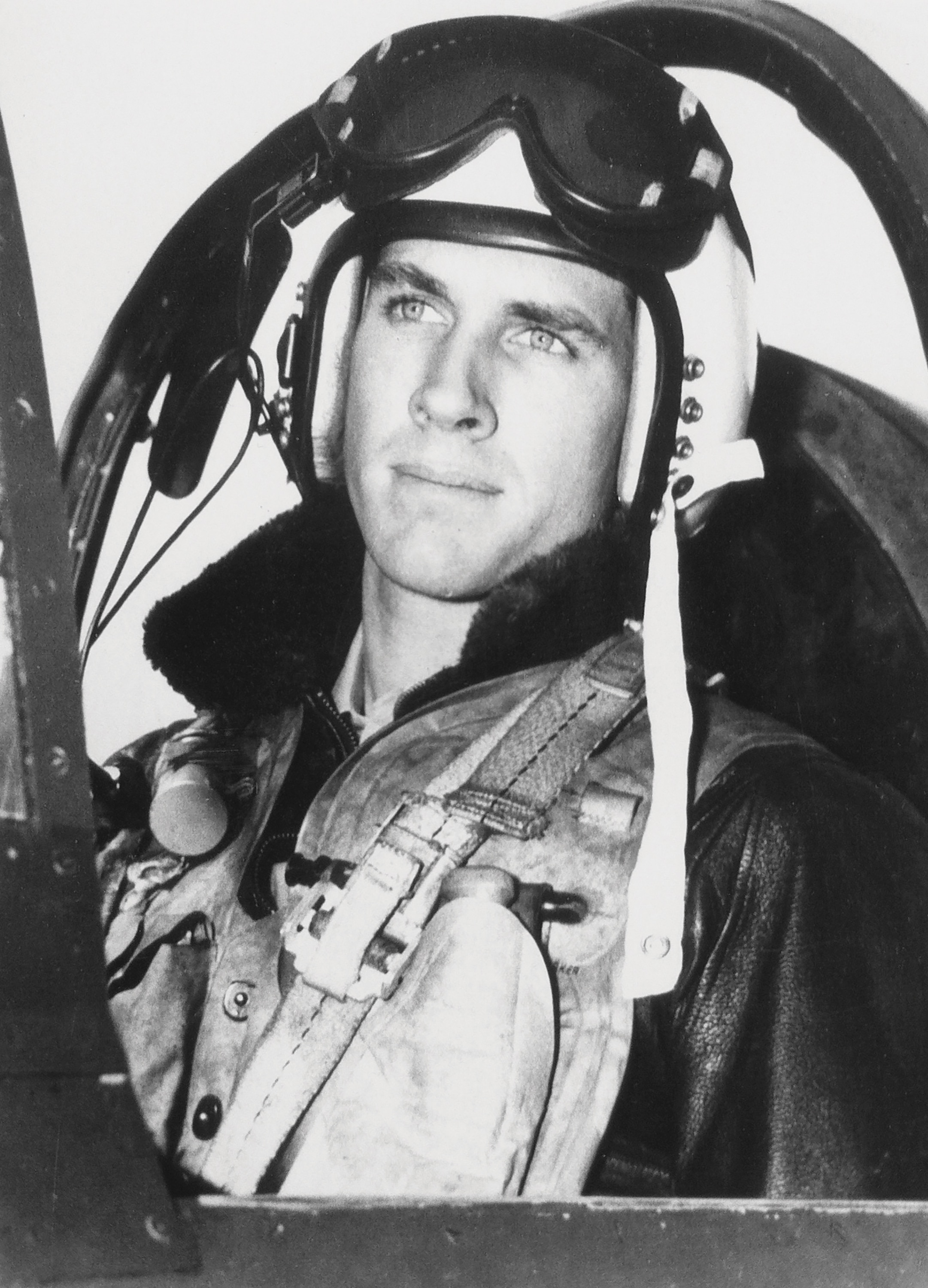 Thomas J. Hudner received the Medal of Honor for intentionally crashing his plane in an effort to save his downed wingman, Jesse L. Brown.
Photo Credit: U.S. Navy
After Brown’s death, "Capt. Hudner and my grandmother maintained a friendship," said Jessica Knight Henry, 34, Jesse Brown’s granddaughter. "He would travel to Mississippi for events honoring Jesse. He was there when Jesse’s ship was christened."

The Navy honored Brown in 1973 with a ship bearing his name — the USS Jesse L. Brown, the 38th Knox-class frigate.

Saturday’s event was "an amazing honor for Captain Hudner," Jessica Henry said. "We were happy to be there for him."

Hudner and Brown’s friendship is also a part of Navy lore.

"Oh, yes, that’s a well-known story," said Francis Zygmont, 86, who attended the christening. Zygmont served aboard the USS Leyte from 1951-53 but didn’t know Hudner personally. "Everyone heard about it."

"I see Jesse Brown as being a part of that ship, too, very definitely," he wrote. "This ship will tell his story as it sails the high seas."

The USS Jesse L. Brown served in the Atlantic and Mediterranean before it was decommissioned in 1994. The ship was transferred to the Egyptian navy and renamed Damiyat.

When the new Secretary of the Navy takes office, a letter will be waiting, one asking for another ship to bear Brown’s name.

Hudner agrees. "The Navy’s often commissioning and naming new ships as we maintain the fleet," he says. "And I passionately believe there should be another USS Jesse L. Brown.

George Petras is a graphics editor/researcher for USA TODAY in McLean, Va.

Defence Munitions Crombie in eastern Scotland may grow into a logistics hub from which the Navy "can better facilitate end-to-end sustainment across Europe’s High North region.”

Navy Personnel Command said it will release results next week.

‘In the crosshairs’: Department of Navy releases climate change strategy

‘Top Gun: Maverick’ is the respite from reality we all need

Objections centered on the library gathering but allegedly have led to a blanket ban from local leadership on any drag-related Pride Month event.

US Army signs deal to backfill Stingers sent to Ukraine

Raytheon has netted a contract to build Stinger anti-aircraft missiles to replace those the U.S. military sent to Ukraine.

Hero teacher killed in Texas shooting was a Marine mom

Can we honor deaths by suicide on Memorial Day?

Families of veterans who died by suicide likely may wonder if we’re guilty of “stolen valor” when openly honoring them on Memorial Day.

'We understand this will not be an easy or a quick fix.'

We are moving. What are some great PCS financial tips for my military family? | Money Minute

The end of Osprey resupplies for Marines?

‘In the crosshairs’: Department of Navy releases climate change strategy

Before the submarine Connecticut and its crew collided with an undersea mountain last fall, red flags abounded