7 US sailors missing after catastrophic collision

By J.D. Simkins and David B. Larter

Seven American sailors are missing and an unspecified number are injured after the guided missile destroyer Fitzgerald collided with a merchant vessel off Japan's coast in the Philippine Sea.

Its commanding officer, Cmdr. Bryce Benson, was medically evacuated from the ship Saturday morning local time. He was transferred to U.S. Naval Hospital Yokosuka and is reportedly in stable condition, a Navy release said.

A second medical evacuation was also being arranged, the Navy said.

As of 9 a.m. local time, the Fitzgerald's crew was still fighting to control damage to the ship as it limped backed to land, three sources with knowledge the incident told Navy Times.

The incident occurred around 2:30 a.m. about 50 nautical miles southwest of Yokosuka, Japan. The Fitzgerald suffered extensive damage above and beneath the waterline when, according to U.S. officials, it struck the Philippine-flagged merchant vessel ACX Crystal, a ship that displaces nearly 40,000 tons and is roughly the size of an amphibious assault ship such as the Wasp or Iwo Jima. That's more than four times the size of Fitzgerald.

Initial reports suggested that Auxiliary Machine Room 1 and two crew berthings were completely flooded. Given the late hour, most crew members not standing watch would be in the berthing.

It is unclear how much warning the crew had that a collision was imminent, and there's been no immediate word on the fate of those aboard the ACX Crystal.

Two sources told Navy Times the crew had made progress on dewatering the ship, but the status of the flooded compartments remains unclear.

The Fitzgerald is currently under its own power but with limited propulsion, officials said. The guided missile destroyer Dewey, along with two Navy tugs and aircraft, are en route to assist as quickly as possible, according to a news release from U.S. 7th Fleet.

The Japanese Coast Guard cutters IZUNAMI and KANO, and a Japanese helicopter, are assisting.

"U.S. and Japanese support from the Navy, Maritime Self Defense Force and Coast Guard are in the area to ensure that the Sailors on USS Fitzgerald have the resources they need to stabilize their ship," said Adm. John Richardson, chief of Naval Operations, in the release. "As more information is learned, we will be sure to share to it with the Fitzgerald families and when appropriate the public. Thank you for your well wishes and messages of concern. All of our thoughts and prayers are with the Fitzgerald crew and their families."

"Right now we are focused on two things: the safety of the ship and the well-being of the Sailors," said Adm. Scott Swift, commander of the U.S. Pacific Fleet. "We thank our Japanese partners for their assistance." 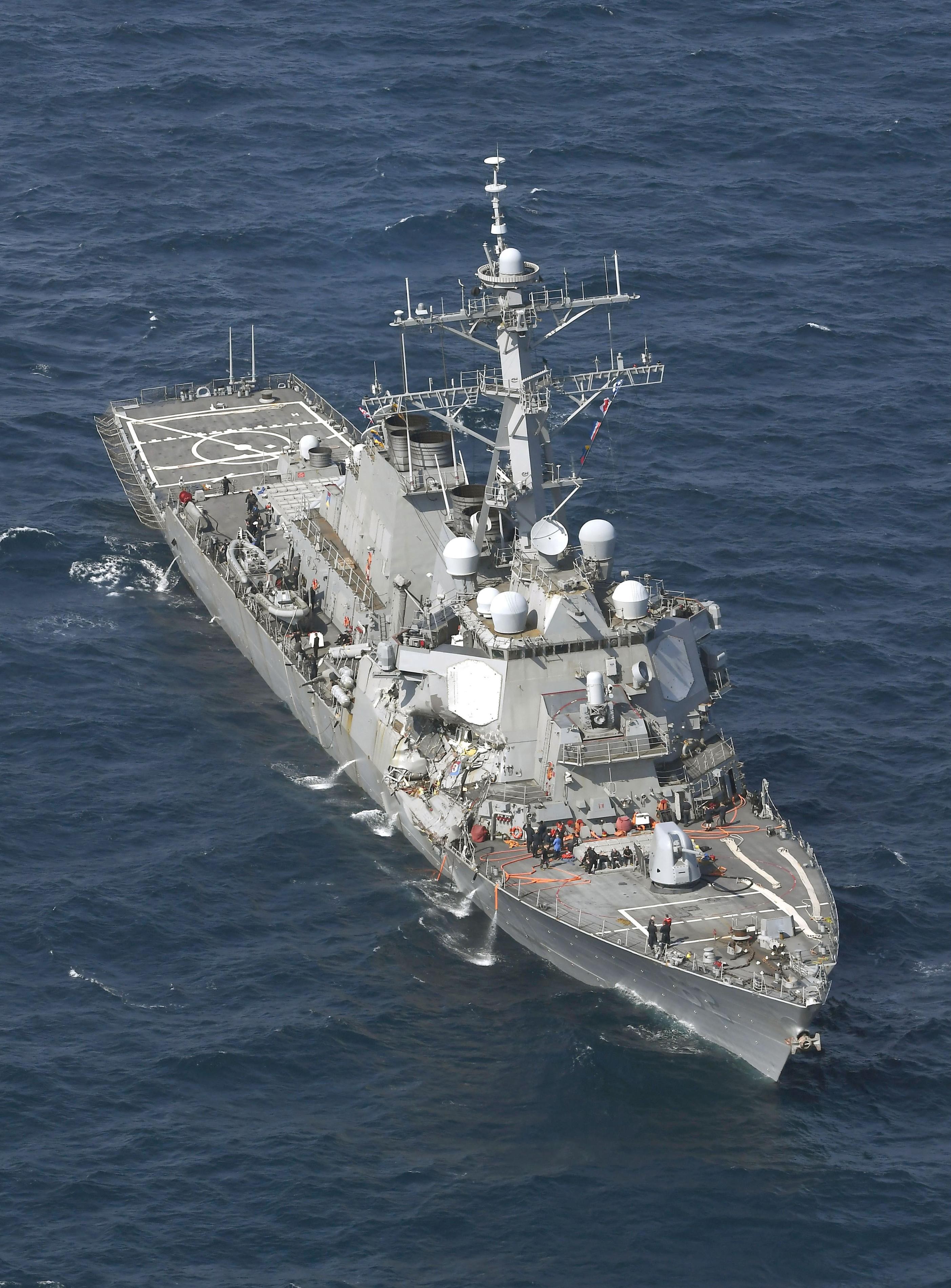 This aerial photo shows The USS Fitzgerald that is damaged by the collsion with Philippines merchant ship off the coast of Shimoda City, Shizuoka Prefecture on June 17, 2017. Japanese Coast Guard reported seven U.S. crew members were missing and one is injured.
Photo Credit: ( The Yomiuri Shimbun via AP Images )
Pacific Fleet said the extent of injuries and damage are "being determined," and the incident is under investigation, according to The Associated Press.

Japanese media aired footage of the stricken Fitzgerald. The violent collision occurred on the ship's starboard side, under the the bridge. The ship's crew has set up water eductors, which means they're combating flooding.

Benson, the ship's skipper, previously commanded the mine sweeper Guardian. The extent of his injuries are unclear.

About J.D. Simkins and David B. Larter

J.D. Simkins is a writer and editor for Military Times, and a USMC veteran.

Ricky Shiffer served in the Navy and the Florida Army National Guard, according to military records.

With the help of Oplign, Amazon is using artificial intelligence to match skill sets of veterans and their spouses to careers post-service.

3M sold its Combat Arms earplugs to every branch of the armed forces, but design defects may have caused hearing loss for service members.

Military sexual assault survivors should be able to sue for damages, judges rule

A lawsuit against the former vice chairman of the Joint Chiefs could now go to trial.

The report calls out the State Department for deeply underestimating the number of refugees.

Reflecting on burn pits after the passage of the PACT Act

Kelly Kennedy, War Horse managing editor, was the first reporter to cover burn pits and the resulting illnesses in service members returning from Iraq and Afghanistan.

Biden called the PACT Act one of the most important changes to veteran support policies in decades.

Campaigning at the top of the world: The Arctic and homeland defense

It is becoming increasingly apparent that competitors, such as Russia and China, desire to influence international norms and alter the behaviors of allies, partners and Arctic-focused countries for the benefit of these competitor nations.

US launches three airstrikes against al-Shabab in Somalia

The strikes killed four militants, according to a release.

China appears to wind down military drills near Taiwan

China reaffirmed its threat to use military force to bring self-governing Taiwan under its control, amid threatening Chinese military exercises.

From Super Hornet to space: How this Marine became an astronaut

When will the next-generation missile interceptor be ready?

US: Drone attack targets US base in Syria, no casualties