CORPUS CHRISTI, Texas — There's a tattered billboard sign on Highway 77 in Kingsville that says "We (heart) our jet noise."

After 75 years, the love affair continues.

The Corpus Christi Caller-Times reports Naval Air Station Kingsville planned to mark its 75th anniversary with weekend activities including fireworks and a parade.

"We wanted to go all out to make this something special," said Leo Alarcon, director of tourism for the city of Kingsville.

The base is home of Training Air Wing Two. It's one of two military facilities that offer jet training for Navy and Marine Corps pilots. 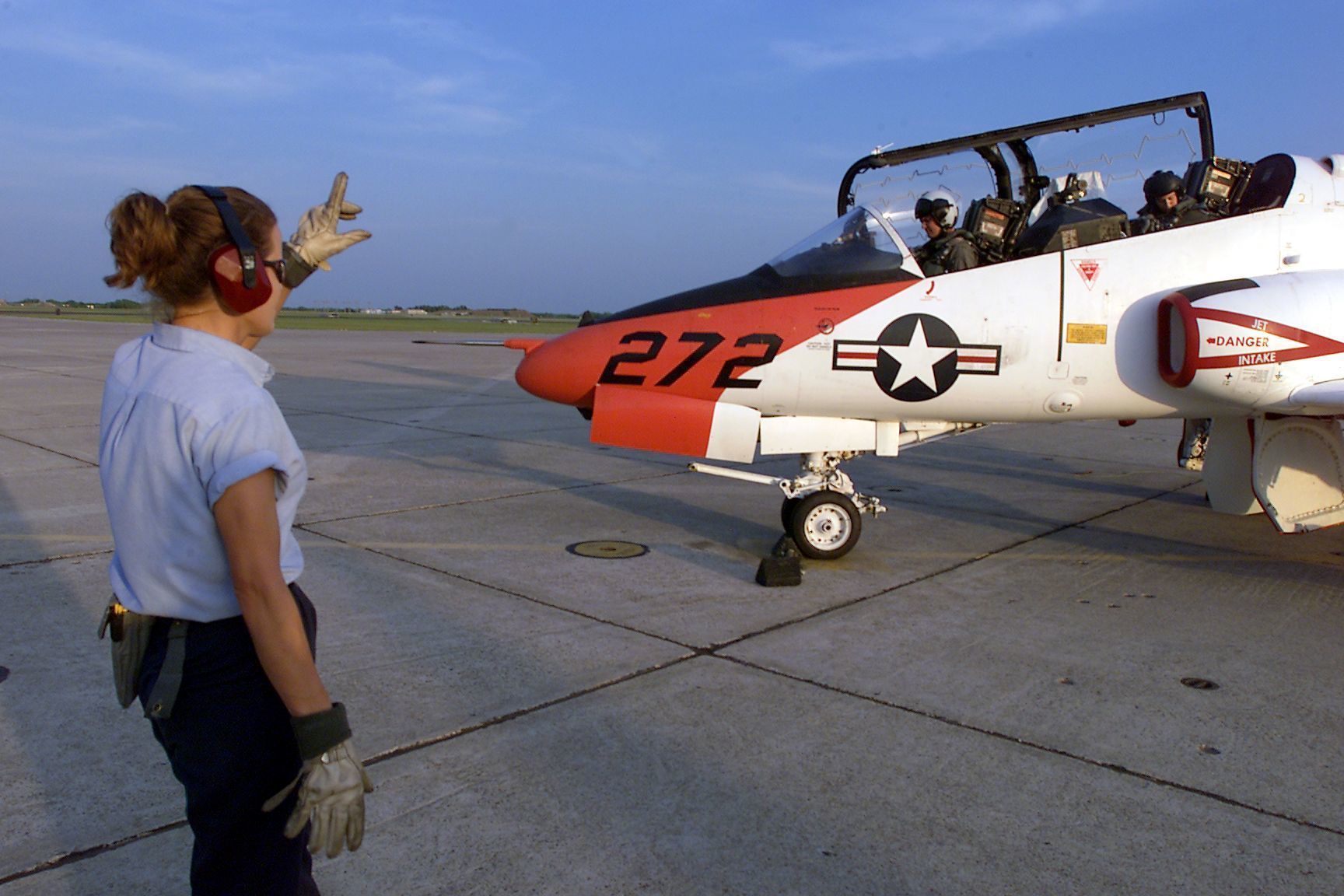 In this April 24, 2002 photo, flight instructor Capt. William Cupples, front seat, and Ensign Kristin Burke begin their flight in a T-45 aircraft at Naval Air Station Kingsville in Kingsville, Texas as plane captain, Susan Rousseau gives the pilots instructions. The base was commissioned 75 years ago on July 4, 1942.
Photo Credit: Corpus Christi Caller-Times via AP
The base's story began when a group of Kingsville civic leaders went to Washington in 1941 to pitch the community's merits to the U.S. Department of Defense.

They wanted a military base in the area, and wasted no time highlighting Kingsville's biggest assets — reliably sunny weather, a small population and acres of untapped land that was flat for as far as the eye could see.

The base was commissioned July 4, 1942. It was originally an auxiliary base for Naval Air Station Corpus Christi, which had opened a year earlier.

The military's footprints in and around Kingsville have been deep and indelible ever since.

According to data from both the base and the U.S. Census Bureau, roughly one in seven residents in Kleberg County is in some way associated with NAS Kingsville. They include active duty members of the military, civilians and contracted employees and their dependents.

Today, the base is one of 15 military installations in Texas, and is the workplace of 1,650 people. However, it is estimated that NAS Kingsville is responsible for as many as 4,600 direct and indirect jobs, both on and off the base property. 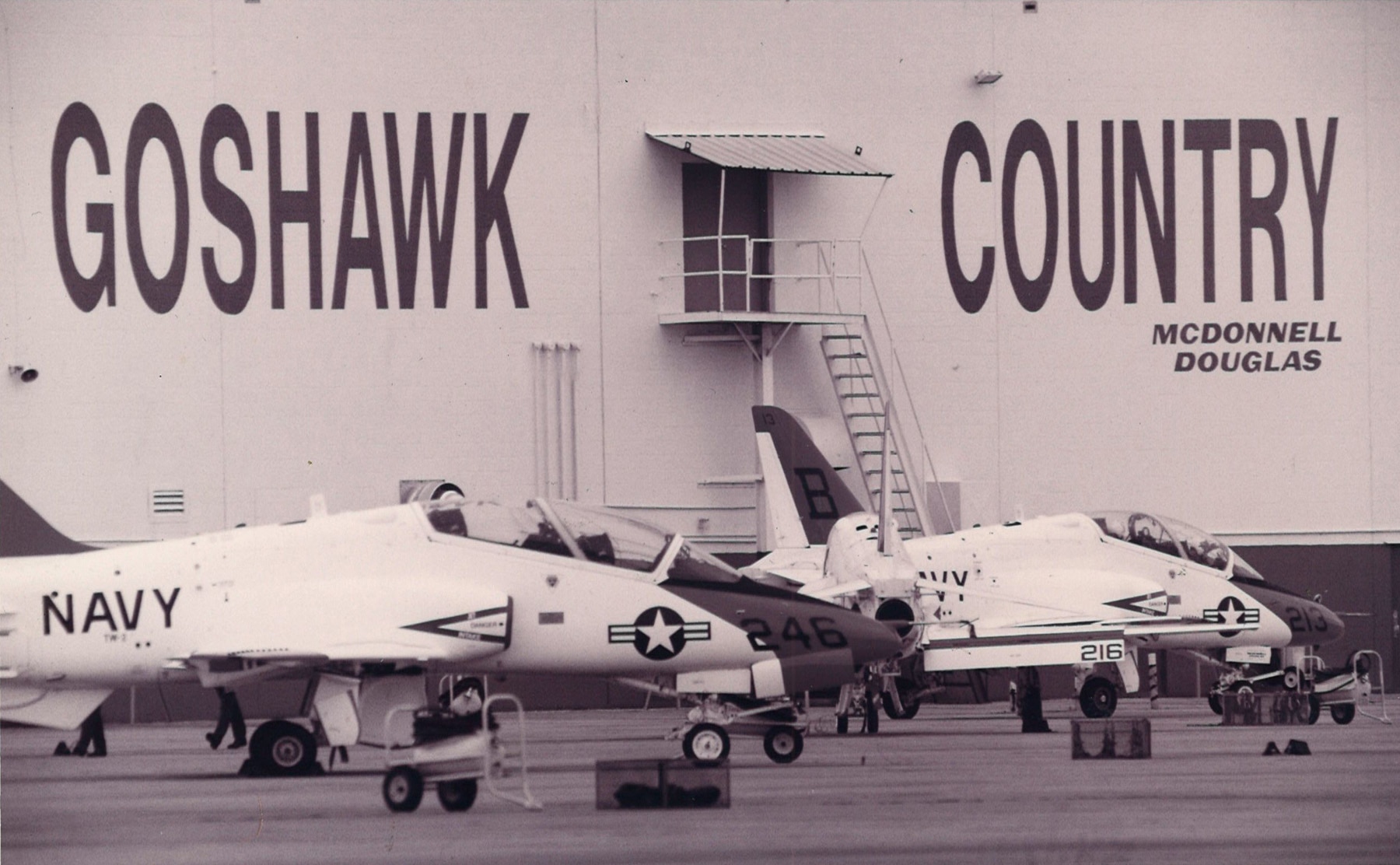 This December 1994 photo shows the hangar for the VT-21 squadron hangar in Kingsville, Texas.
Photo Credit: Corpus Christi Caller-Times via AP
About 200 flight students train there, along with roughly 150 flight instructors.

The Texas Comptroller of Public Accounts estimates NAS Kingsville generates about $289 million each year in disposable personal income from those workers.

Many of those dollars end up in the local economy, which has kept Kingsville afloat financially.

"It's an economic driver. As the base goes, so goes this community and the county," said Thomas Krueger, a finance professor from the business college at Texas A&M University-Kingsville. "We've been so lucky to have been blessed by a successful base.

"It benefits the whole region."

New homes are being built and new restaurants have either opened or have been scouting the area in recent months. Krueger and Alarcon interpreted both as a sign the relationship between the base and Kingsville is healthy.

"We have a lot of a commanders and others that come back and retire here because of it's slow-paced, it's comfortable," said Alarcon, a former Kleberg County clerk. "We've been partners for all these years. I believe that relationship is going to continue."

The exercise, which has been in the works since 2020 and isn’t in response to rising tension with Russia, will place the Truman and its carrier strike group under NATO operational control.

Someone in his chain failed to ensure the junior sailor was squared away.

After a vaccine booster evolution conducted Friday, the number of mids who had received a COVID-19 booster immunization jumped from 71% in early December to 87%.

The hike in seizures comes amid increased patrols in the Gulf of Oman and the Arabian Sea.

Hundreds of millions of dollars have been spent by DoD, nonprofit organizations and employers, but spouse unemployment is still high, advocacy group says.

The Baltic states have received approval from Washington to send American-made weaponry to Ukraine to help the country fend off a potential Russian invasion.

No war yet. US, Russia to try more diplomacy amid tensions over Ukraine.

Expectations were low going in, and there was no breakthrough.

The United Arab Emirates is the first to use the Terminal High Altitude Area Defense System in an attack by Houthi militants. It successfully took out a mid-range ballistic missile aimed at a civilian site in the country.

US carried out airstrikes in Syria against ISIS

The airstrikes were in response to the ISIS group unleashing its biggest attack in Syria since the fall of its “caliphate” three years ago.