By Jennifer McDermott, The Associated Press

PROVIDENCE, R.I. — The keel of the nation's 20th Virginia-class attack submarine named for Oregon was laid Saturday at the manufacturing plant for General Dynamics' Electric Boat.

The milestone marks the ceremonial beginning of a ship's construction. Modern submarines do not have a traditional keel that runs the length of the ship because they are built in modules. Instead, at the event, the submarine's sponsor wrote her initials in chalk on a metal plate for a welder to inscribe and to be mounted on the submarine.

The future USS Oregon is expected to cost about $2.7 billion and be delivered to the Navy in November 2019.

"Oregon is going to be put to work the minute it's launched because the demand signal is at the highest level," said U.S. Rep. Joe Courtney, a Connecticut Democrat. 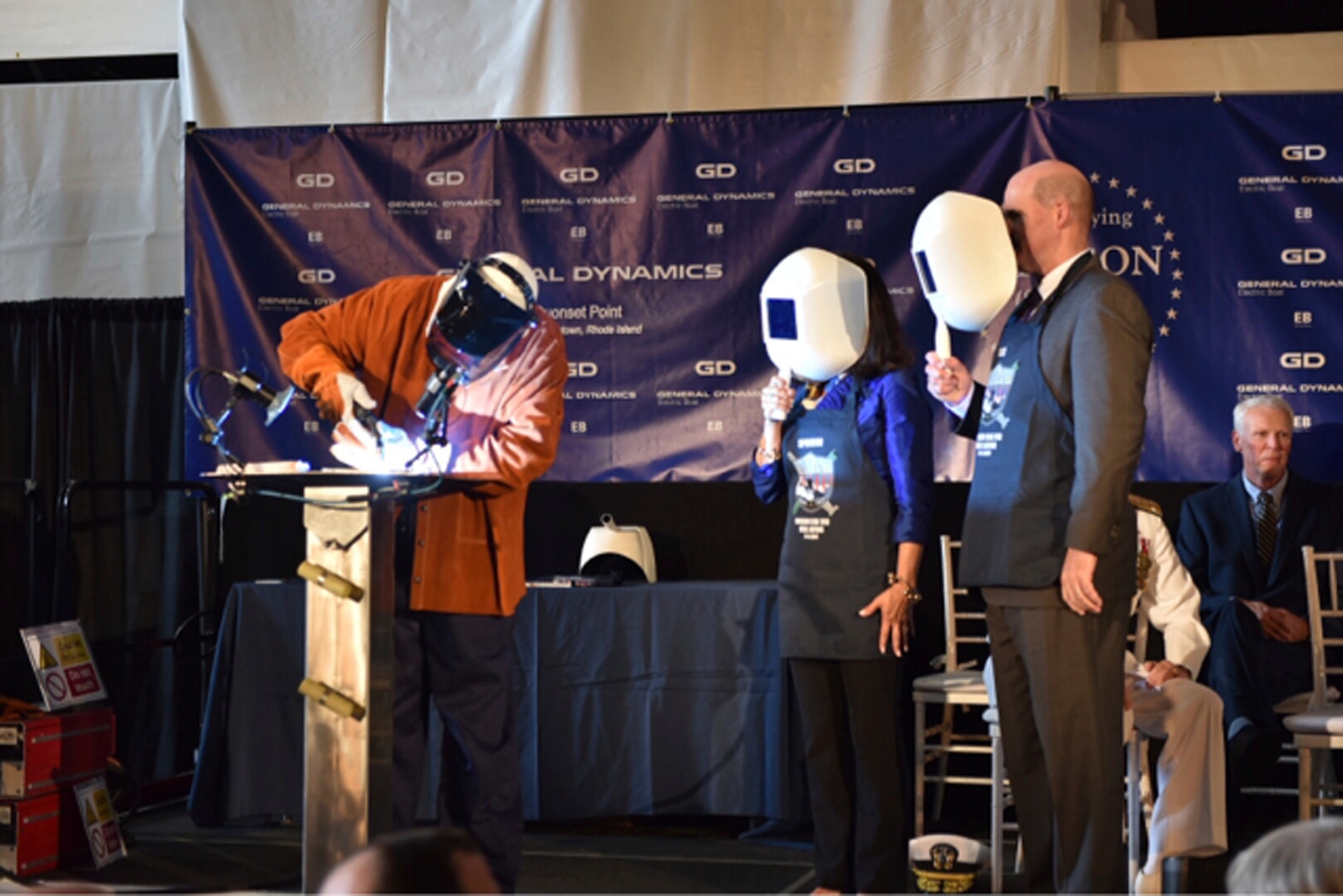 This photo provided by the US Navy shows Stephen Corr welding the outline of Dana Richardson’s initials on the Oregon keel as Dana and Electric Boat President Jeff Geiger look on Saturday, July 8, 2017, in North Kingstown, R.I.
Photo Credit: Navy via AP
The keel-laying comes at a time when many in Congress and in the military are eager to get more submarines into the fleet. Groton, Connecticut-based Electric Boat and Newport News Shipbuilding in Virginia have an agreement to build two attack submarines annually.

The House and Senate Armed Services Committees have each approved bills to authorize building three submarines instead of two in some years, and also authorize additional funding to prepare for the increased work.

"It's really a robust, bipartisan recognition that submarines are the stealthiest, strongest and most survivable among most of our naval assets," said U.S. Sen. Richard Blumenthal, a Connecticut Democrat. 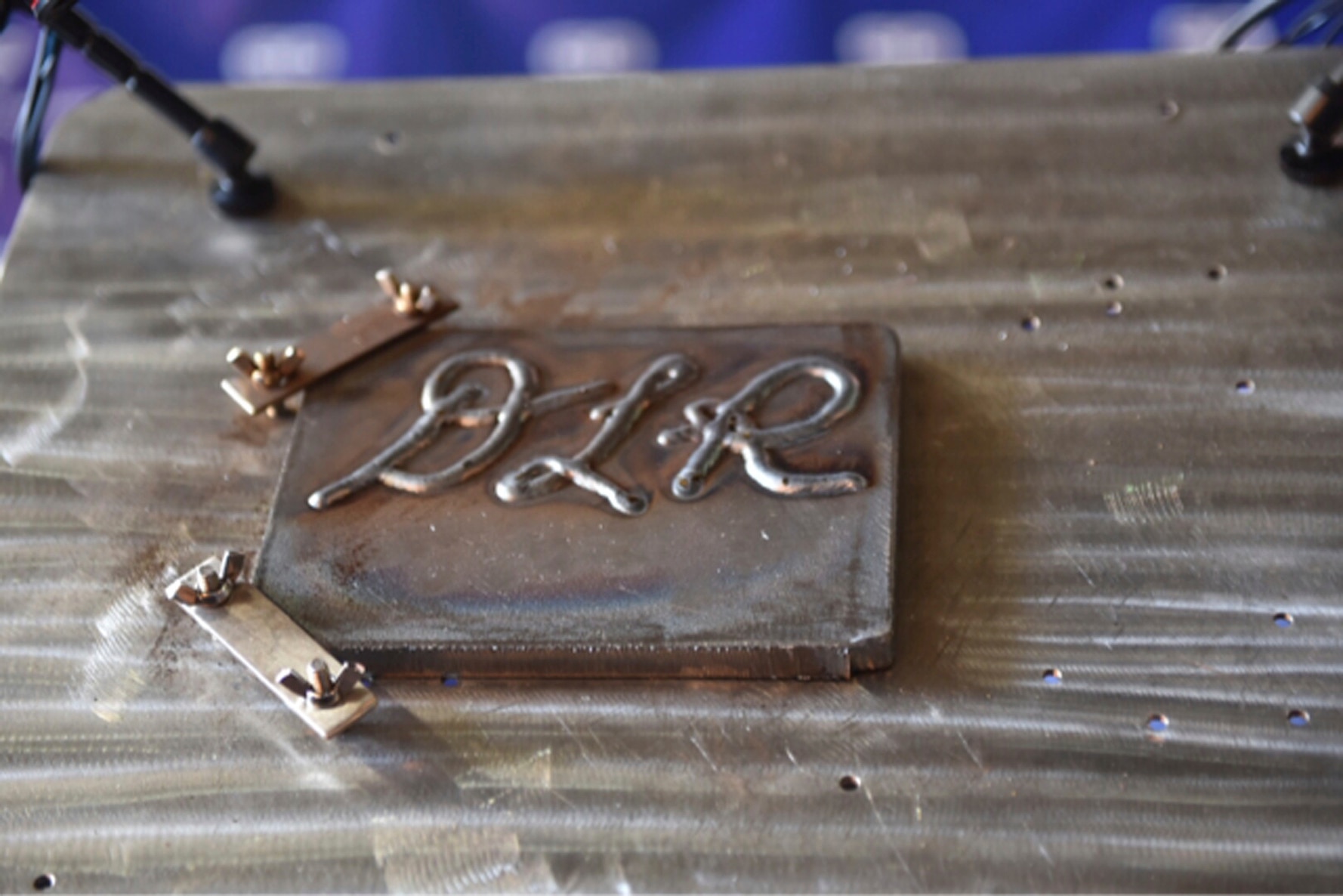 This photo provided by the US Navy shows the welded initials of Dana Richardson Saturday, July 8, 2017, in North Kingstown, RI.
Photo Credit: Navy via AP
For centuries, U.S. Navy ships have had female sponsors who christen the vessels. It is said that the sponsor's spirit and presence guides the ship throughout its life. Public officials and wives of senior naval officers serve as sponsors for many of the ships named after places.

The Oregon's sponsor is Dana Richardson, wife of Adm. John Richardson, the chief of naval operations and a submariner. Richardson, a native of Corvallis, Oregon, said she wants to use what she's learned over 35 years as a military spouse to help sailors and their families. She said their unique way of life is rewarding, but also challenging.

"We already have a pretty big family, five kids, but I feel like now I'm gaining a bigger family," she said. "My family is expanding to include dedicated, committed sailors and their families, and I'm looking forward to being a part of their lives."

3M sold its Combat Arms earplugs to every branch of the armed forces, but design defects may have caused hearing loss for service members.

Military sexual assault survivors should be able to sue for damages, judges rule

A lawsuit against the former vice chairman of the Joint Chiefs could now go to trial.

The report calls out the State Department for deeply underestimating the number of refugees.

Reflecting on burn pits after the passage of the PACT Act

Kelly Kennedy, War Horse managing editor, was the first reporter to cover burn pits and the resulting illnesses in service members returning from Iraq and Afghanistan.

Biden called the PACT Act one of the most important changes to veteran support policies in decades.

Campaigning at the top of the world: The Arctic and homeland defense

It is becoming increasingly apparent that competitors, such as Russia and China, desire to influence international norms and alter the behaviors of allies, partners and Arctic-focused countries for the benefit of these competitor nations.

US launches three airstrikes against al-Shabab in Somalia

The strikes killed four militants, according to a release.

China appears to wind down military drills near Taiwan

China reaffirmed its threat to use military force to bring self-governing Taiwan under its control, amid threatening Chinese military exercises.

Russia denied any aircraft were damaged in Tuesday’s blasts — or that any attack took place.

Janey, the only one of the author's four children conceived at Camp Lejeune, North Carolina, died of leukemia at age 9.