U.S. submarines aren’t the only entities spending time underwater beneath the polar ice cap during the five-week-long ICEX 2018.

Navy divers from the Little Creek, Virginia-based Mobile Diving and Salvage Unit Two and Underwater Construction Team One, along with Coast Guard counterparts, have been spending time in the frigid water as well, providing support for the subs. 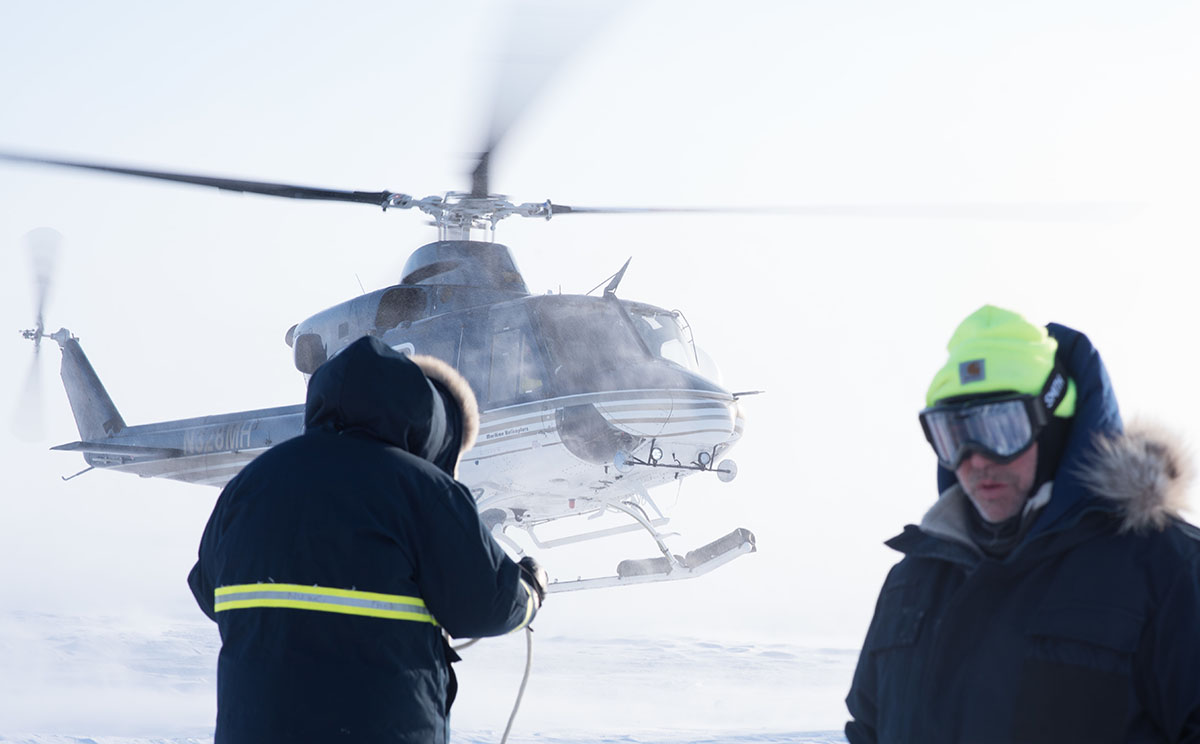 Ice Camp Skate (March 16, 2018) – Members of Ice Camp Skate prepare to recover a torpedo during a torpedo exercise in the Arctic Circle in support of Ice Exercise (ICEX) 2018, March 16. (photo by MC1 Daniel Hinton/Navy)
2 of 7 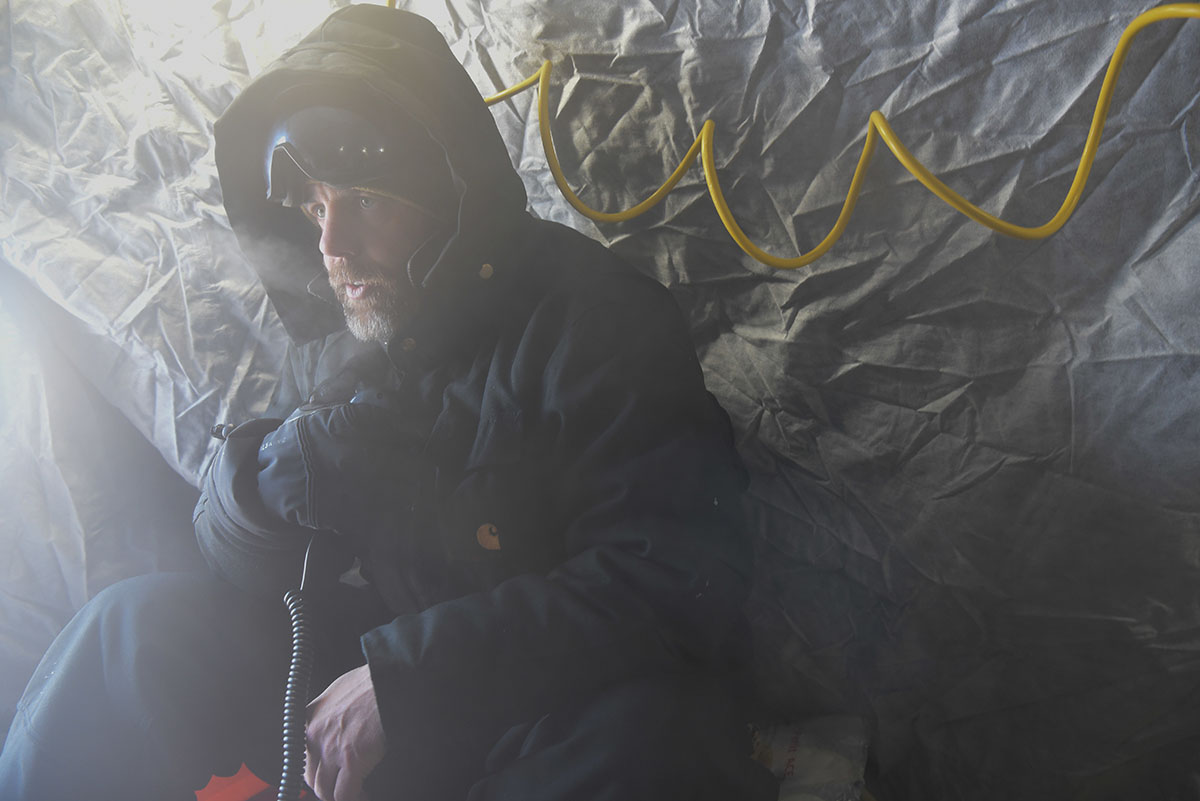 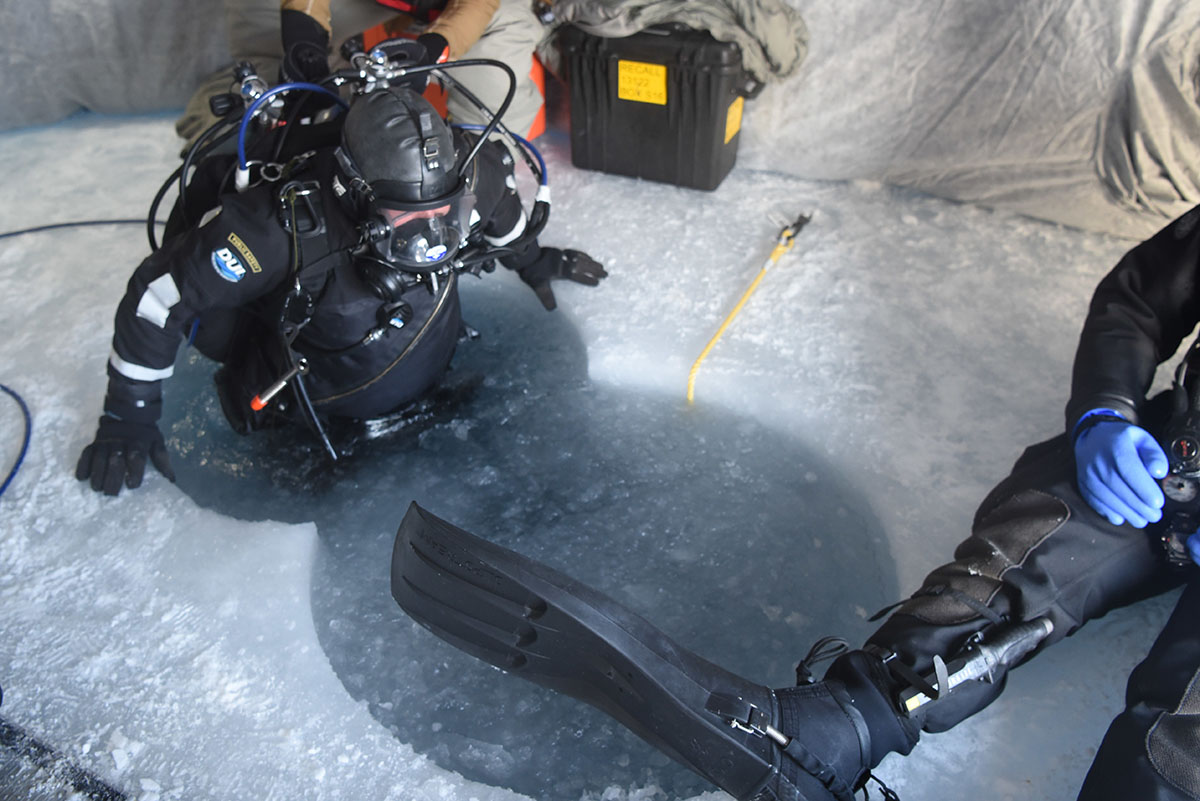 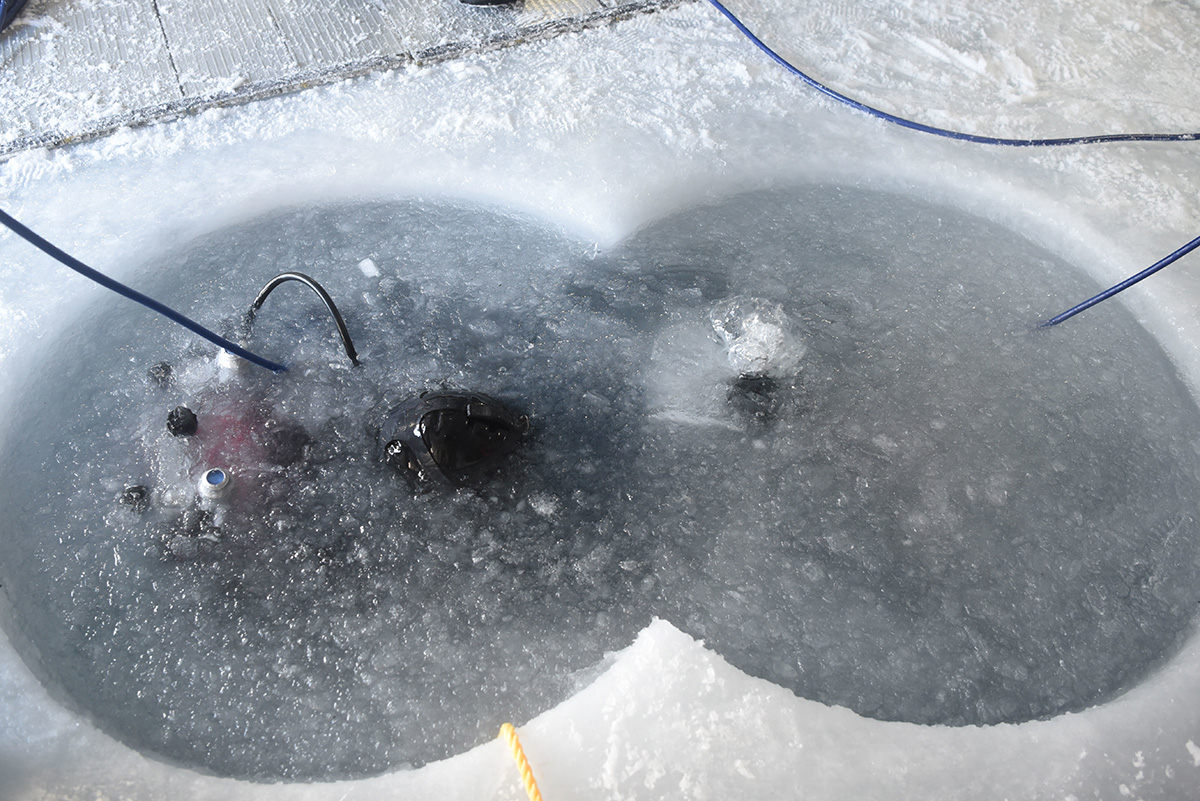 180316-N-KC128-185 Ice Camp Skate (March 16, 2018) – Coast Guard Diver 1st Class Dylan Smith, assigned to Regional Dive Locker West, dives into a water hole during a torpedo recovery exercise in the Arctic Circle in support of Ice Exercise (ICEX) 2018, March 16. ICEX 2018 is a five-week exercise that allows the Navy to assess its operational readiness in the Arctic, increase experience in the region, advance understanding of the Arctic environment, and continue to develop relationships with other services, allies and partner organizations. (U.S. Navy photo by Mass Communication Specialist 1st Class Daniel Hinton)
5 of 7 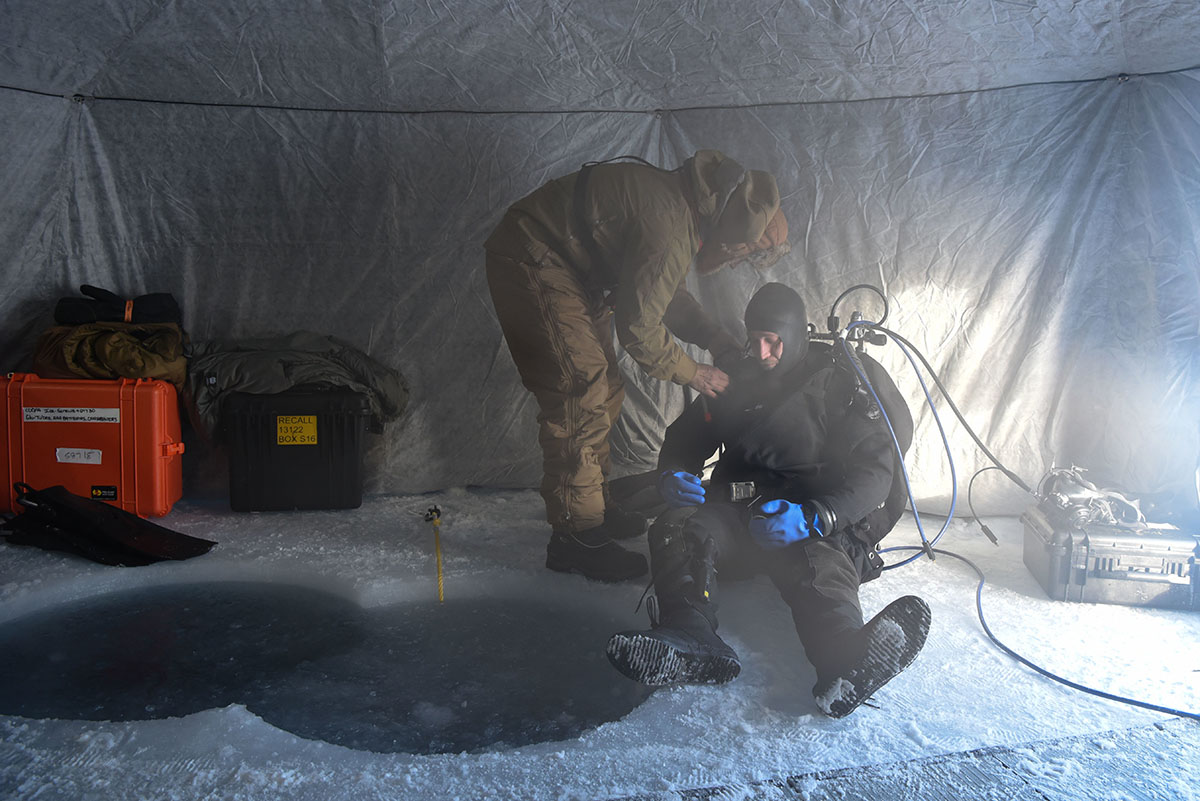 Ice Camp Skate (March 16, 2018) – Chief Hospital Corpsman Kristopher Mandaro, assigned to Underwater Construction Team One, prepares for a dive during a torpedo exercise in the Arctic Circle in support of ICEX 2018.(photo by MC1 Daniel Hinton/Navy)
6 of 7 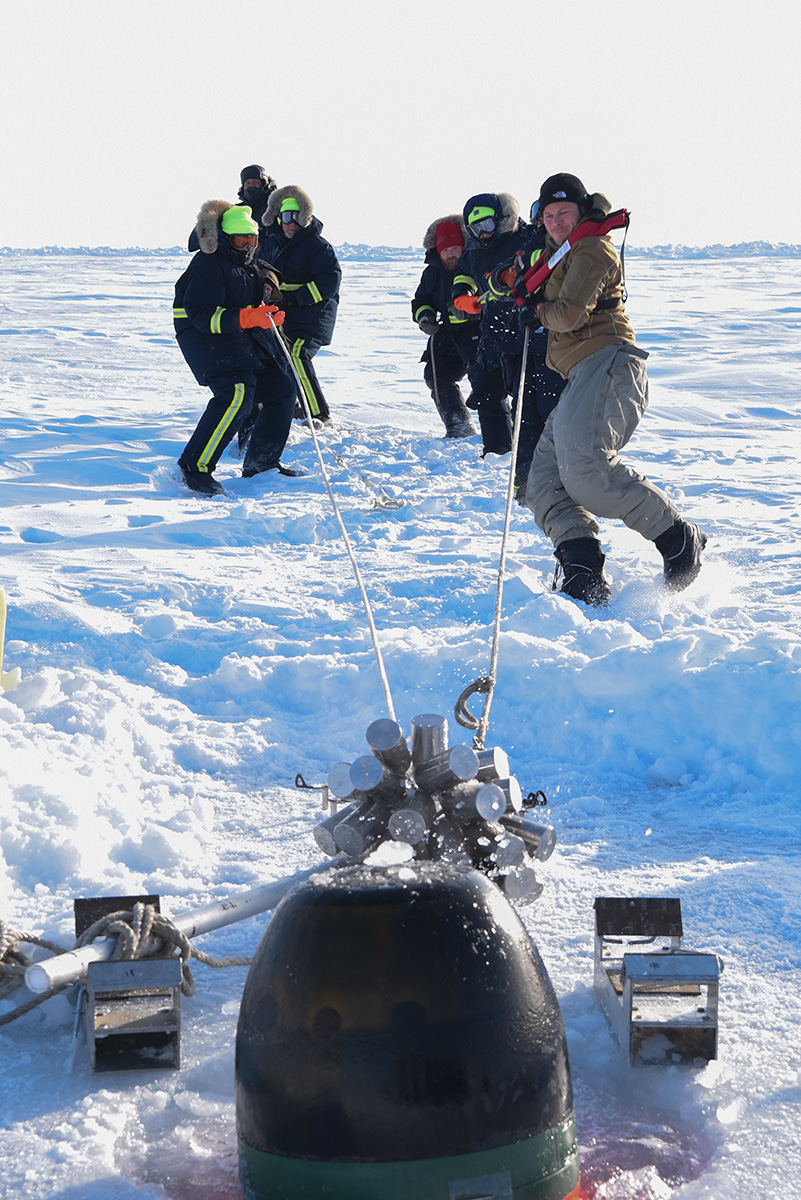 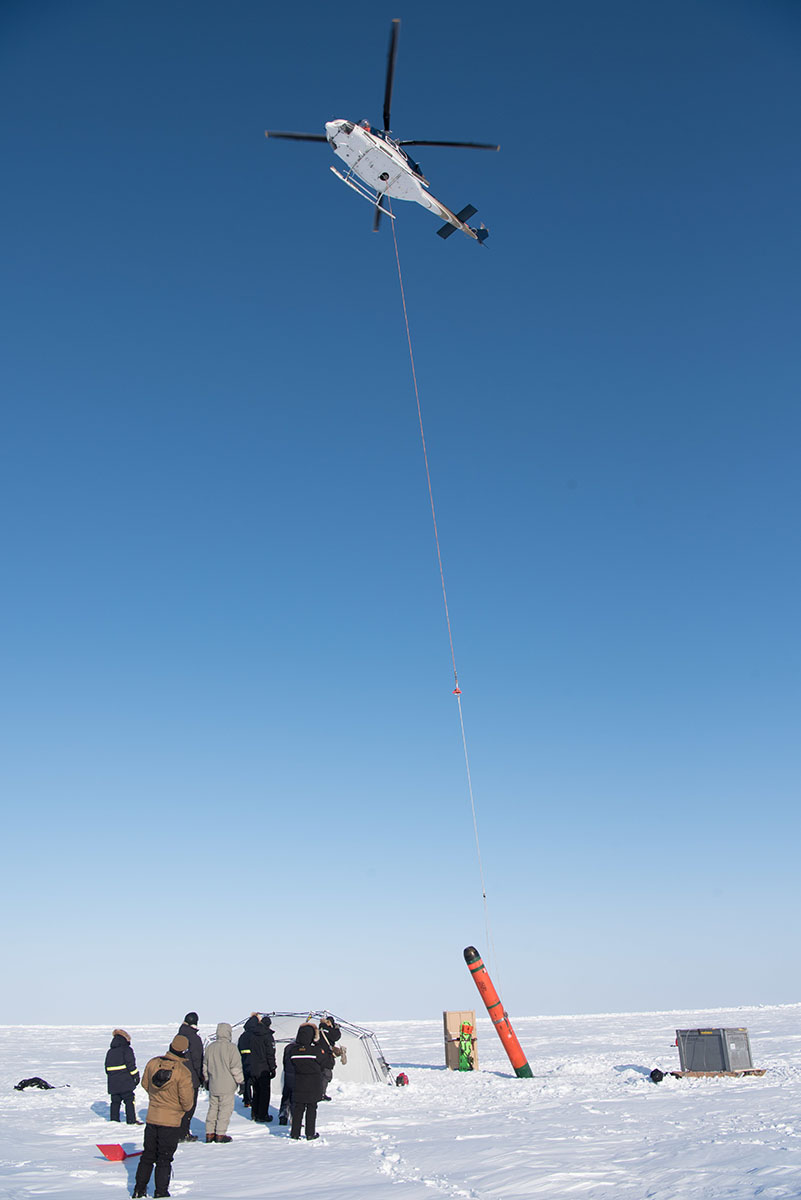 Every two years the Navy makes a point to stretch its under-the-ice operational legs to not only get the unique experience of operating in that environment, but to test out new technologies as well. Supporting those efforts allows divers the chance to work in one of the toughest places in the world.

This is how a nuclear submarine crashes through Arctic Circle ice

A submarine smashing it’s way through Arctic ice is certainly impressive from the outside, but what’s happening below the surface?

During this year’s exercise, the two U.S. attack subs participating, Connecticut and the Hartford, fired several training torpedoes under the ice that carry sensors to gather data on how the weapons perform in the harsh environment.

That’s where the divers come in. Training torpedoes don’t carry much fuel, so their run is short. They are designed to be positivley buoyant so that they will rise to the surface. The solid ice sheet makes that a bit difficult, however, so it becomes the divers’ job to locate the torpedos.

“Once the divers recover these torpedoes, we can extract important data about how they perform and react in these conditions.” said Ryan Dropek, the director of weapons testing at Naval Undersea Warfare Center Division in Newport, Rhode Island.

Once the torpedo is located, a three- to four-person team will drill a series of holes for the divers to enter and exit, as well as one hole for the torpedo to be lifted by helicopter.

“Once we know the location of the torpedo and drill holes, our divers slip into the water to begin placing weights on a line attached to the tail end of the torpedo,” said Chief Warrant Officer Michael Johnson, the officer-in-charge of MDSU-2 divers. “The weights help shift the torpedo from a state of positive buoyancy to neutral buoyancy under the ice.”

The U.S. Navy is testing its capabilities in the Arctic with submarines named after Connecticut and its capital city.

Once the torpedo is neutral, the divers place hook up cables to the torpedo for the helicopter to connect to.

It may sound like simple, but to perform in such an environment requires not only training in handling Mk-48 torpedoes, but in ice diving techniques as well.

Money Minute: Evaluating whether to refinance

On this week's Money Minute, find out how you should evaluate refinancing.
Close
Now Playing

Governors call up the National Guard to battle coronavirus | Newsbreak