Trump placed the medal around Slabinski’s neck at a White House ceremony May 24 in front of a packed room full of guests, which included other of Medal of Honor recipients, as well as seven teammates of Slabinski’s who were with him in Afghanistan in the early morning hours of March 4, 2002.

Trump recapped the events after greeting all the Medal of Honor recipients present by calling them “very, very special people,” and that their “names and immortal acts of valor are forever engraved in the memory of our nation.”

“Today, we induct a new name into the most exclusive gathering of heroes ― and that’s what exactly this is,” he said.

Trump recounted the events of that early morning reconnaissance mission and the actions of then-Senior Chief Slabinski on the 10,000-foot snow-covered mountain in Afghanistan called Takur Ghar.

“Britt and his teammates were preparing to exit the aircraft on the mountain peak when their helicopter was struck by machine gun fire, and machine gun fire like they’ve never seen before, and a rocket-propelled grenade from al-Qaida terrorists down below,” he said. “Not a good feeling” 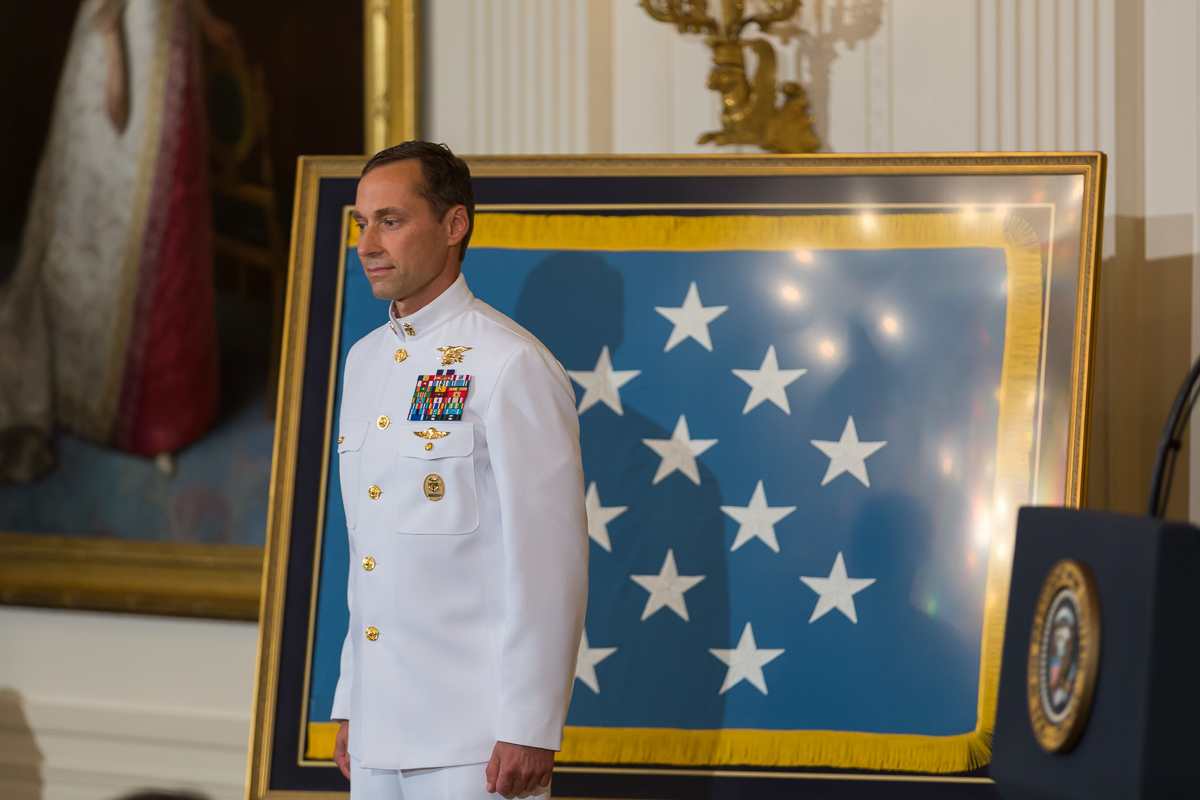 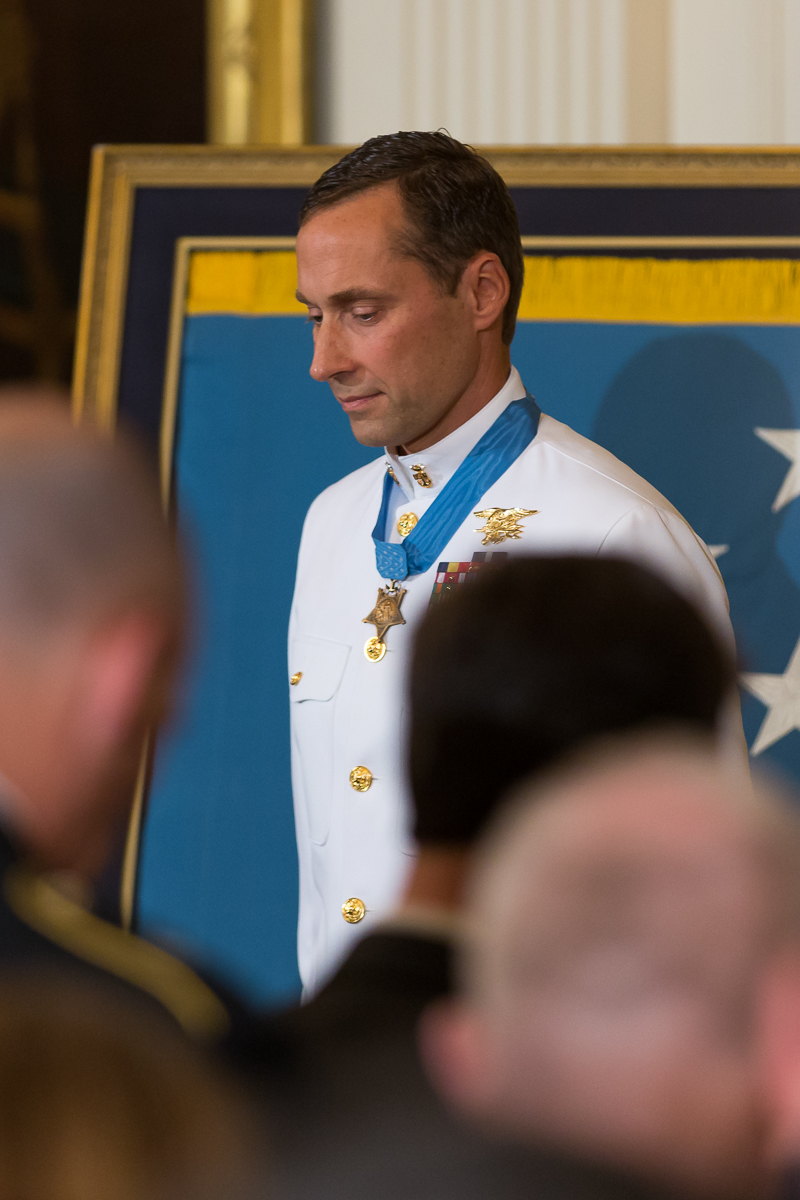 Retired Master Chief Special Warfare Operator Britt Slabinski was awarded the Medal of Honor during a ceremony in the East Room.
3 of 3 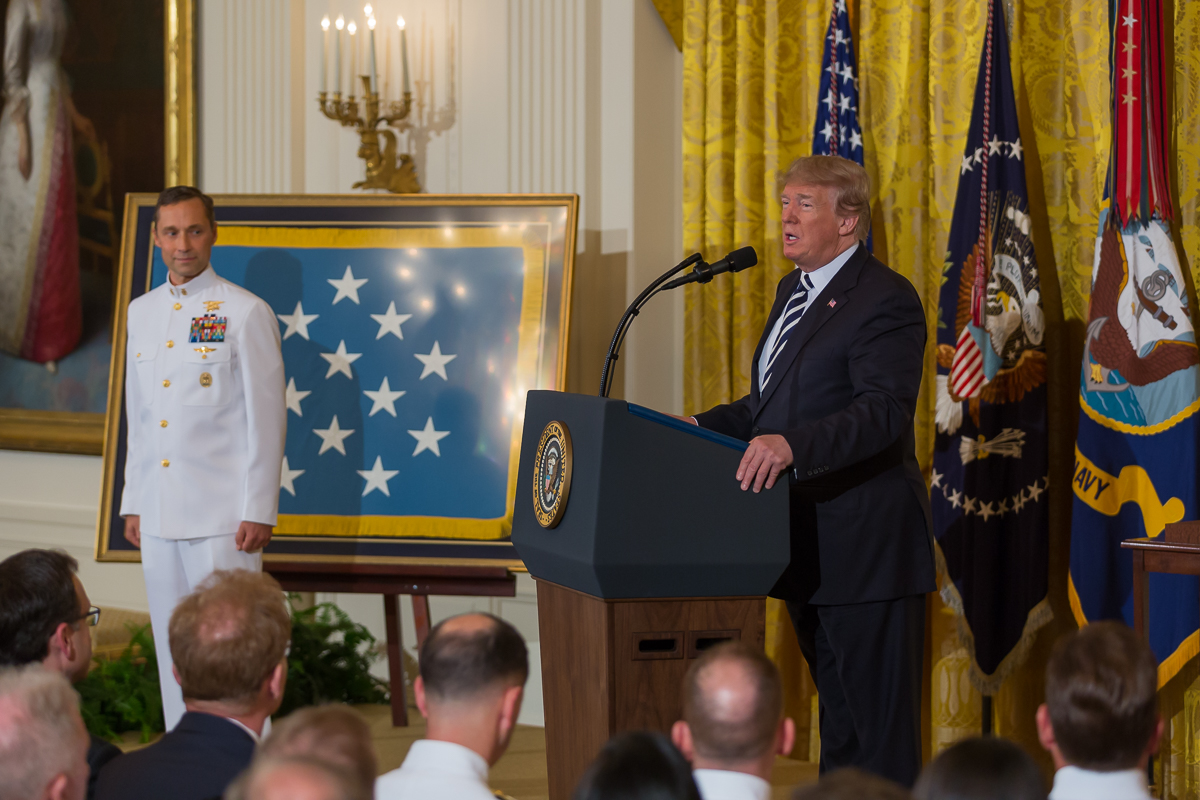 Trump said that as the crippled helicopter “lurched away from the assault” one of the members of Slabinski’s team, Petty Officer 1st Class Neil Roberts was thrown from the aircraft, before the helicopter with the rest of the team crashed into the mountain below.

This alone, Trump said was a “tremendous, horrible thing to witness” though the remainder of the team, Slabinski included, were rescued shortly after by another helicopter.

“At this point, Britt received information suggesting their teammate Neil Roberts, the man thrown out of the helicopter, was probably still alive,” Trump said.

“The team faced a choice: to wait for reinforcements and pretty much safety, or to return immediately to the enemy stronghold in the hope of saving Neil’s life. They would be outmanned, out gunned and fighting uphill on a steep, icy mountain ... they would face freezing temperatures and bitter winds at the highest altitude a battle in the history of the American military.”

With the odds against them, Trump said, Slabinski and the rest of the team didn’t hesitate.

“They made their decision, for them it was an easy one,” he said. “They went back to that mountain and when their helicopter reached the peak, they jumped out in to a furious onslaught of machine gun fire.”

President Donald Trump walks with U.S. Navy Master Chief Special Warfare Operator Britt K. Slabinski to a ceremony where he was to award him with the Medal of Honor during a ceremony in the East Room of the White House in Washington, Thursday, May 24, 2018. (Andrew Harnik/AP)

The first order of business was to secure the peak and silence those enemy machine guns. Slabinski and his teammate, Air Force Tech Sgt. John Chapman charged uphill towards the bunkers, Chapman knocked one out before he was shot.

As members of his team were wounded, Slabinski, braved enemy fire to help them to safety before engineering dangerous retreat down the treacherous mountain slope, taking the wounded with them and sometimes moving through deep snow.

“When they could go no further, Britt tended to the wounded and coordinated their escape until his team was finally evacuated,” Trump said. That evacuation would not come for another 14 hours.

The president then called out the seven members of Slabinski’s team present in the audience, along with names of those killed that day, and recognizing many of their families who were also present.

“These were incredible, incredible men and you can be proud that they were in your family,” Trump said.

President Donald Trump stands with Master Chief Special Warfare Operator Britt K. Slabinski during a ceremony to award him the Medal of Honor in the East Room of the White House in Washington, Thursday, May 24, 2018. Slabinski oversaw a daring 2002 assault and rescue mission on a snowy Afghanistan mountaintop and carried a "seriously wounded teammate down a sheer cliff face" while leading "an arduous trek across one kilometer of precipitous terrain, through waist-deep snow while continuing to call fire on the enemy." (Susan WalshAP)

Though he didn’t speak, Trump relayed Slabinski’s words that the awarding of this Medal of Honor wasn’t an individual award for himelf, but it was recognition of what they did jointly as a team during what Trump called “the Battle of Robert’s Ridge.”

“To Britt and all the men of Robert’s Ridge ... through your actions, you demonstrated that there is no love more pure and no courage more great than the love and courage that burns in the hearts of American patriots,” Trump said

“We are free because warriors like you give their sweat, their blood and, if they have to, their lives for our great nation.”

Trump concluded his words about Slabiniski, who served for another 12 years in the Navy and who now spends much of this time volunteering with the Navy SEAL Foundation and working with Gold Star families, those who have lost loved ones during the wars.

“Britt, we salute you, we thank you and we thank God for making you United States SEAL, we love our Navy SEALs, they are very special people.”

"Life goes by very, very quickly," Medal of Honor recipient Robert Modrzejewski says, and you have to be ready to choose a different path than the one you thought you were supposed to be on. But no matter what you do, you should do it to be best of your ability.
Close
Now Playing

Preventing extremism, women in the draft, and UFOs! | Reporters Roundtable