CHINCOTEAGUE, Va. — The annual pony swim is the biggest event this seashore hamlet can handle.

For 93 years, the late July roundup of wild horses from nearby Assateague Island features a swim across 600 feet of ocean, splashing and crashing that draws thousands of spectators from around the world.

The ponies are auctioned off and the proceeds benefit the local volunteer fire department. The sales also boost conservation efforts on Assateague by trimming the wild horse population.

While the “Salt Water Cowboys” often star in the show — they’re the local honchos herding the horses in the days leading up to the swim — it’s the Coast Guard that protects the safety of horses and handlers alike when they hit the water.

“Our mission is simply to manage the safety of the ponies in the water," said Chief Boatswain’s Mate Ken Morris, officer in charge of the Coast Guard Station Chincoteague, the northern-most station under the operational control of Coast Guard Sector Hampton Roads.

“We have two boats on scene along and are the lead agency, among several other agencies to keep a buffer between the spectator boats and the horses as typically there will be over 200 boats and charters in position to view the event.”

For Morris, a 16-year Coast Guard veteran, the July 25 roundup was not only his first pony swim but also his first real duty there. He reported in as the officer in charge of the station shortly before it kicked off.

His arrival is another milestone in the Coast Guard’s rich history here. It dates back to a lifeboat station that was established in 1833 near the lighthouse on nearby Assateague Island. The modern station was moved to Chincoteague in 1967. 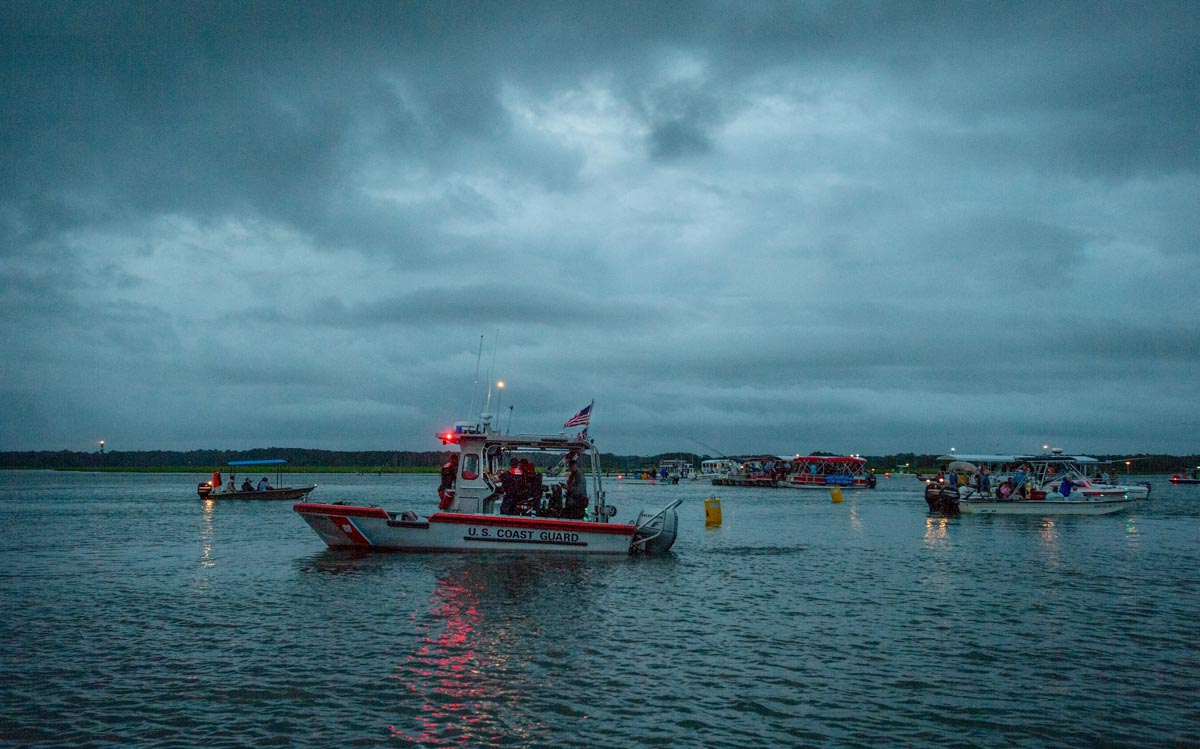 Chincoteague, Va. (July 25, 2018) Coast Guardsmen from Station Chincoteage arrive on station in the pre-dawn hours prior to the start of the Chincoteague annual pony swim. (photo by Joan Zopf-Faram/special)
2 of 9 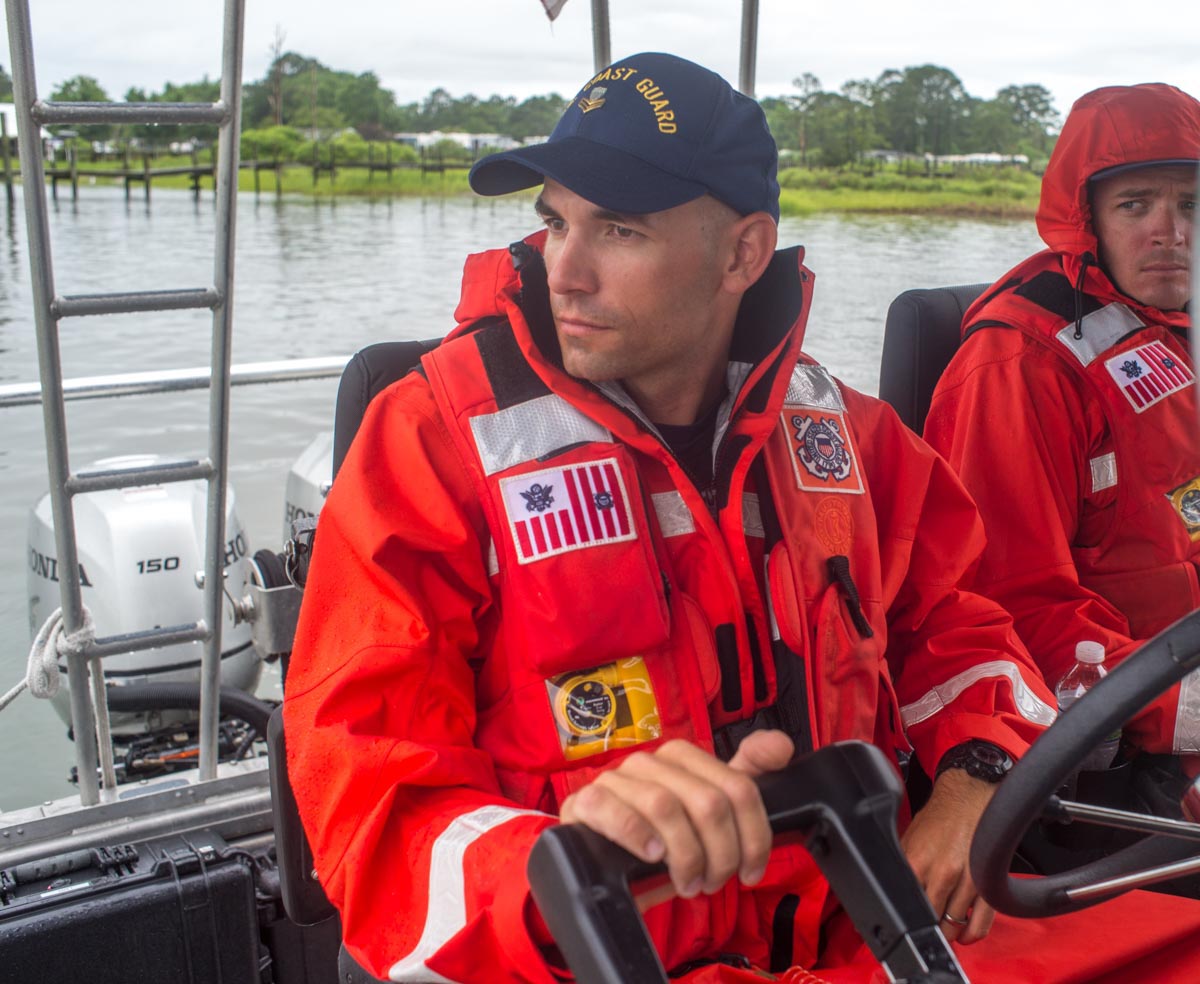 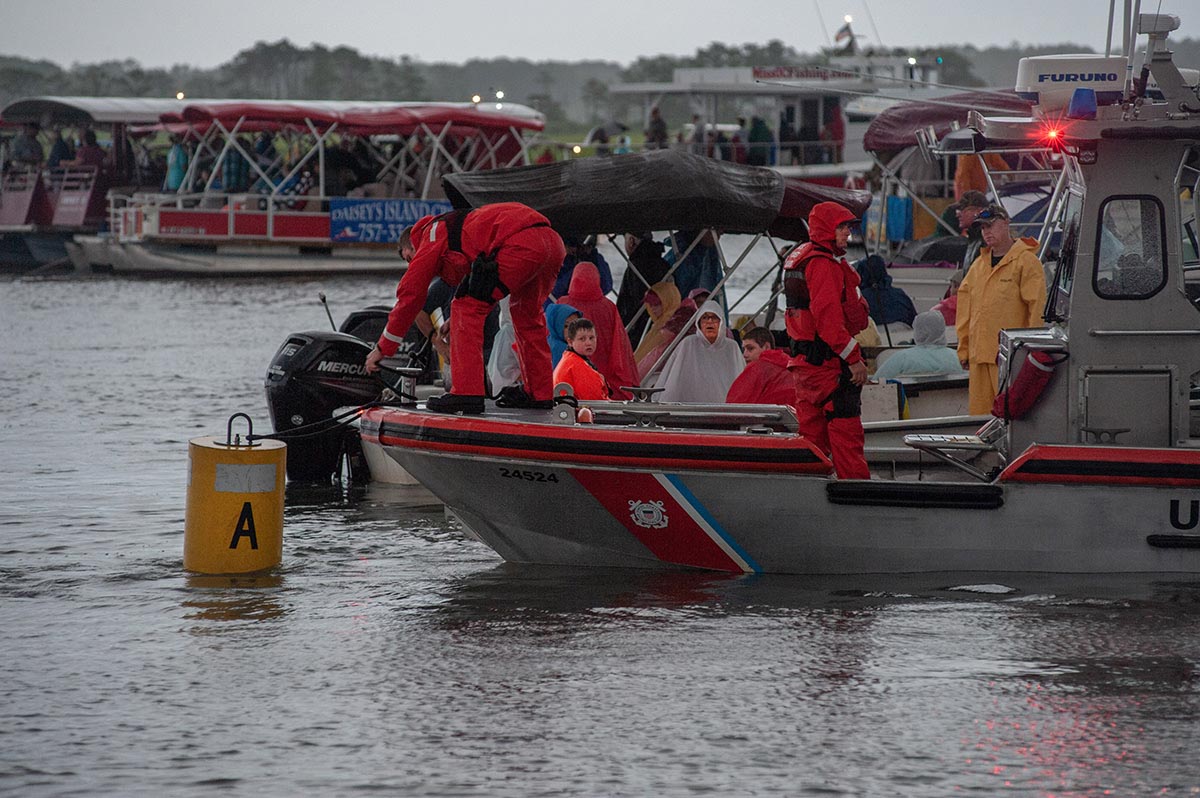 Chincoteague, Va. (July 25, 2018) Coast Guardsmen from Station Chincoteage take reset the route prior to the start of the Chincoteague annual pony swim. (photo by Joan Zopf-Faram/special)
4 of 9 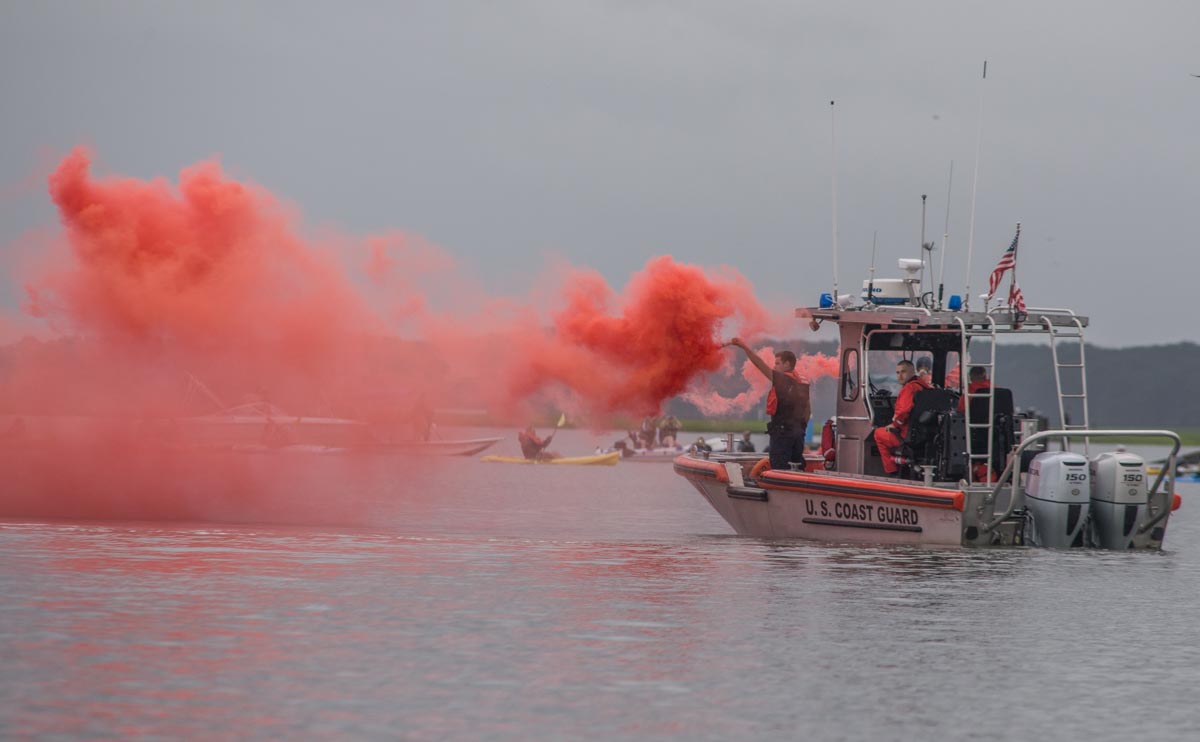 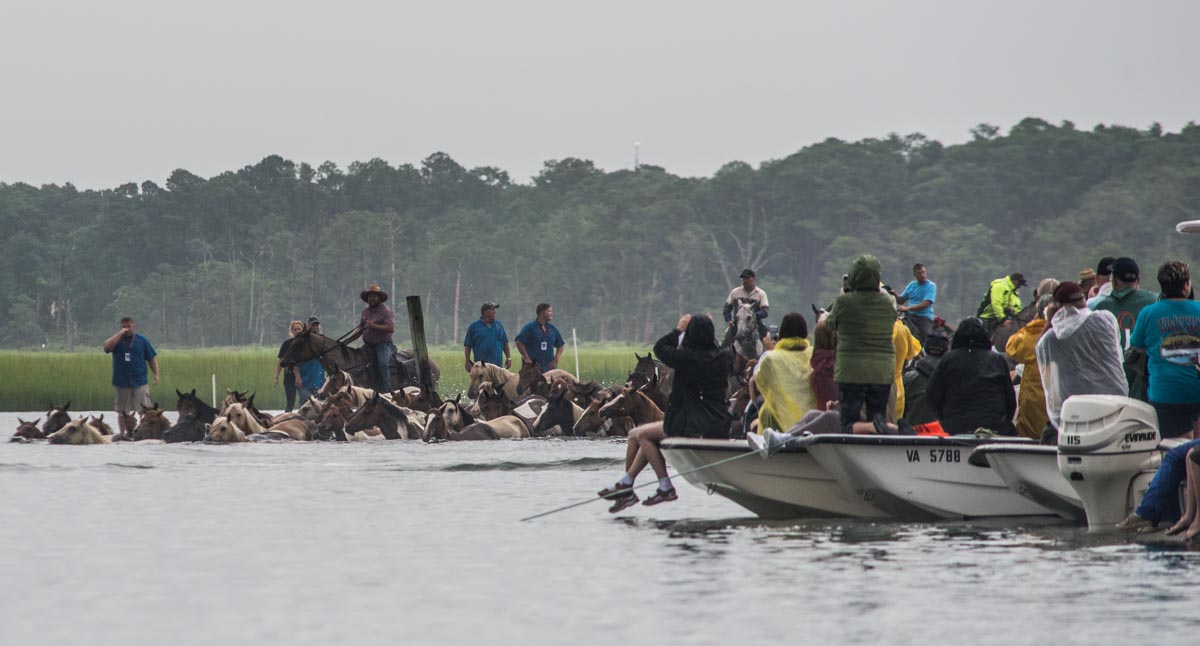 Chincoteague, Va. (July 25, 2018) The start of the Chincoteague annual pony swim as the ponies enter the water at Assageague (photo by Mark D. Faram/Navy Times)
6 of 9 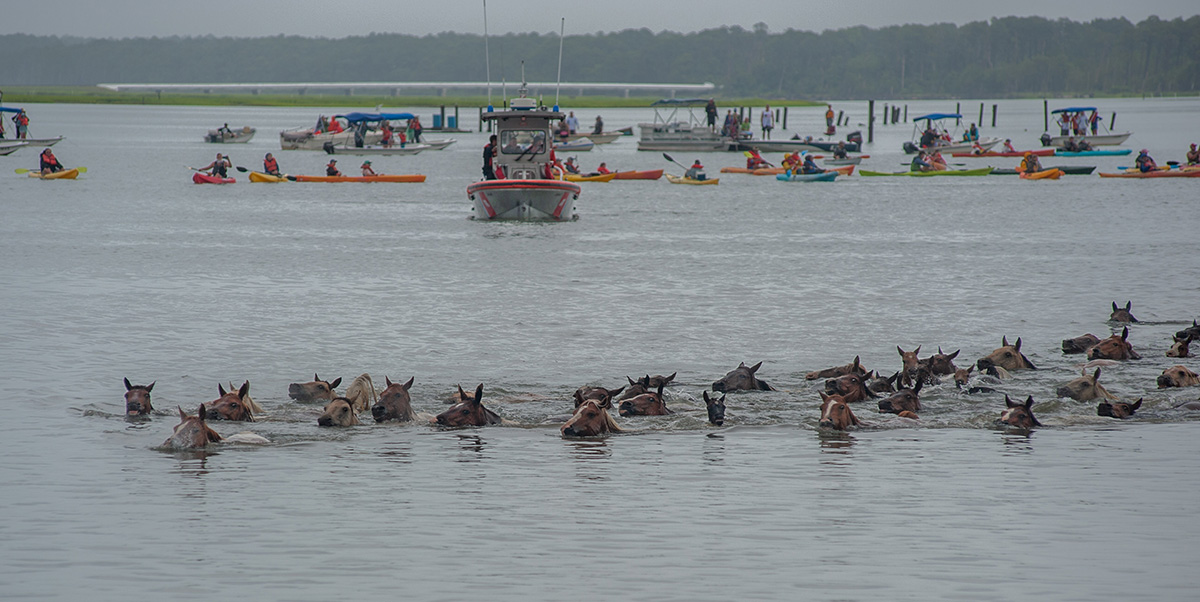 Chincoteague, Va. (July 25, 2018) Coast Guardsmen stand between boaters and kayakers as the ponies swim between Assateague and Chincoteague Islands during the annual pony swim. (photo by Joan Zopf-Faram/special)
7 of 9 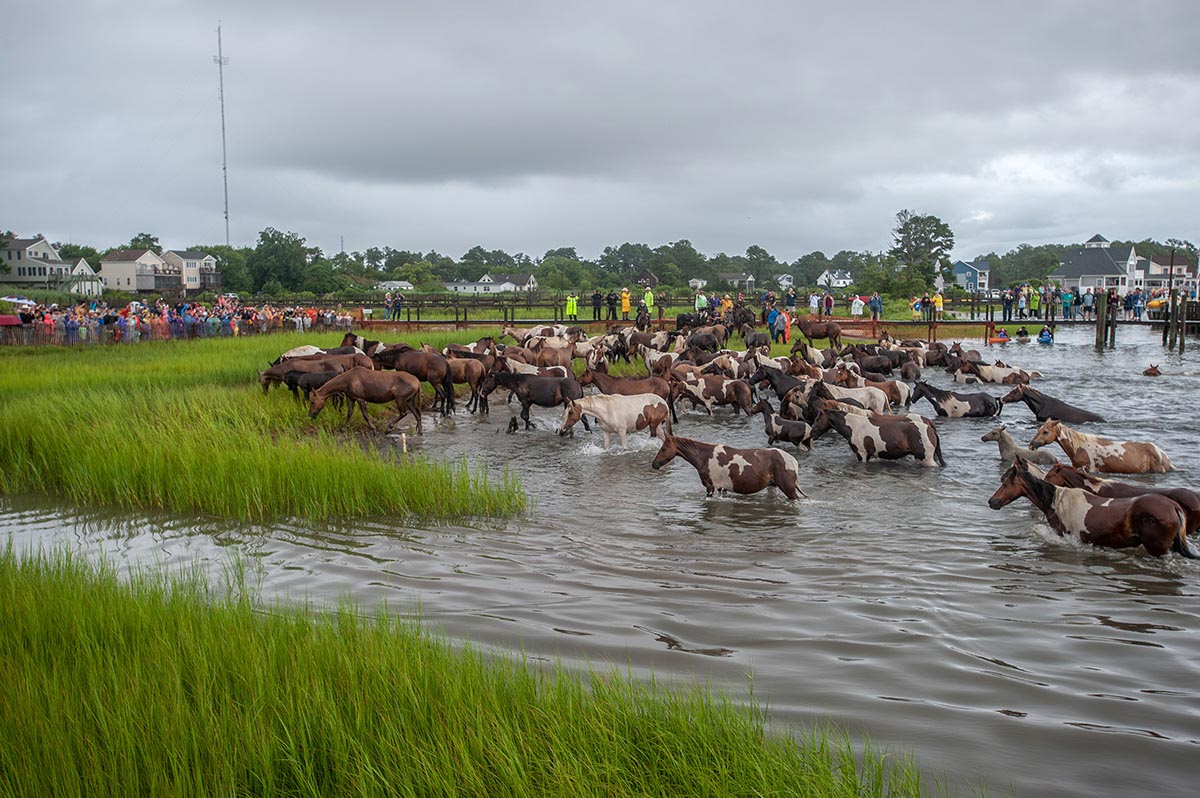 Chincoteague, Va. (July 25, 2018) Safe and sound, the ponies arive on Chincoteage Island after a 200-yard swim from Assateague island. (photo by Joan Zopf-Faram/special)
8 of 9 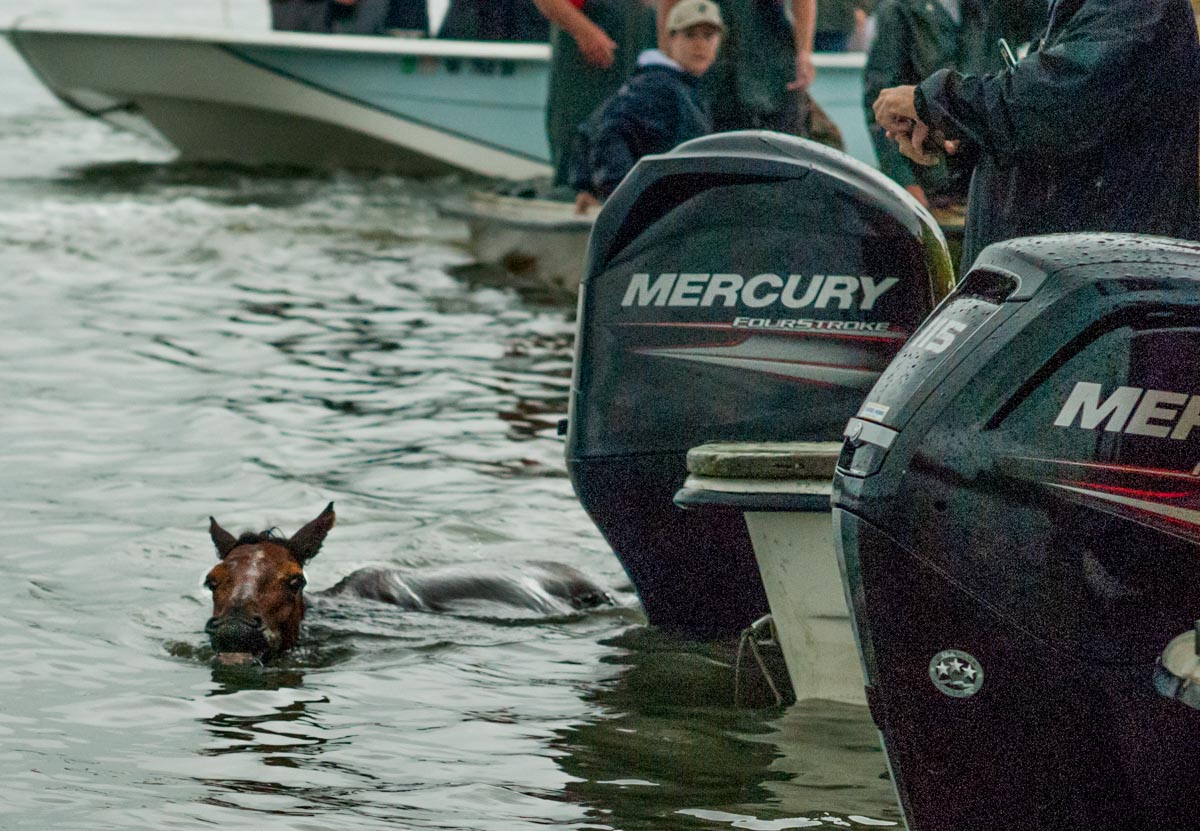 Chincoteague, Va. (July 25, 2018) A lost pony weaves in and out of the crowd of spectator boats, off course during the swim. Coast Guardsmen from Station Chincoteage used their boat to guide the pony to shore. (photo by Mark D. Faram/Navy Times)
9 of 9 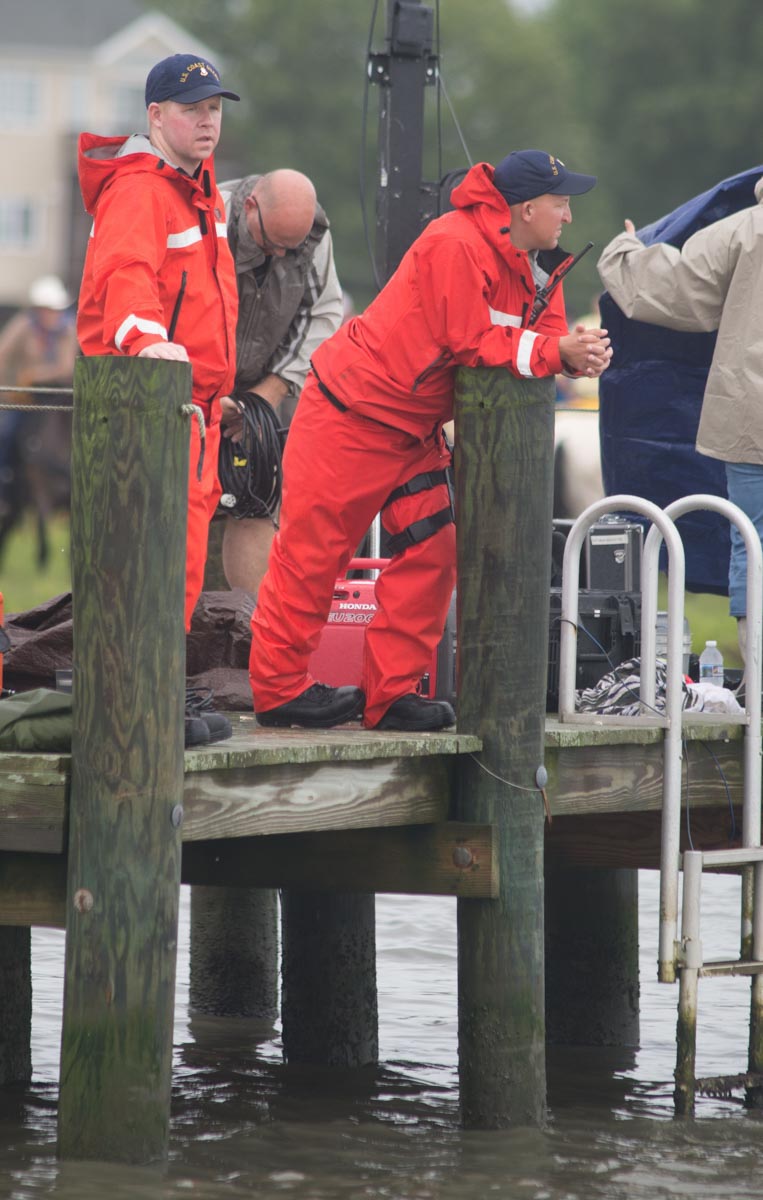 And like many of the Coast Guard’s smaller stations nationwide, it’s managed solely by senior enlisted personnel like Chief Boatswain’s Mate Morris.

He told Navy Times there are no records that show how long the Coast Guard has helped at the horse swim, but it might go all the way back to 1835, when the first written reference to “pony penning” appeared.

Because he was a pony swim rookie, Morris leaned on the station’s second top non-commissioned officer, Boatswain’s Mate 1st Class Carlton Hargis, a 15-year Coast Guard veteran, native of the nearby town of Exmore and an expert coxswain in his own right.

“He’s a local boy and knows the lay of the land 'round this area,” Morris said.

Hargis estimates he’s witnessed 15 pony swims in his lifetime, some dating to his work on local charter boats that bring spectators close to the action.

The water rodeo for Morris, Hargis and the rest of their Coasties this year started at 4 a.m. Some of the crew had little sleep overnight because they investigated distress calls.

They searched but never located stranded mariners and it was still dark when Morris and two boat crews launched their vessels, wending their way to the channel where the ponies would storm into the surf.

The rain came in belts, lashing them with downpours before dwindling to drizzle. Sometimes, the skies would dry, only for a new line of storms to emerge and drench them again.

“The weather has been good most of the time I’ve been here,” said Hargis. “But this is a rain or shine event, so we’ll deal with the weather as we do the rest of the event.”

The rain seemed to dampen enthusiasm in the crowd and turnout appeared lighter than in previous years.

“I’d say there’s about 65 percent of the normal turnout here, today,” Hargis said. “It can get pretty crazy out here because everyone wants to be as close to the ponies as they can ― and it’s our job to keep the swim lane open for the horses.”

The defendant was tied to a U.S. Coast Guard project in Aguadilla, Puerto Rico and proposed deals with the Department of Veterans Affairs in Vermont, Massachusetts, Rhode Island and Maine.

In the days leading up to the swim, Coast Guard crews put out a line of yellow buoys to mark the route the horses will take. As darkness surrendered to dawn on the morning of the swim, however, Hargis and his crew had to position them again.

Charter boats anchored close to the markers likely yanked them off course.

It was the second Coast Guard boat that actually kicked off the swim. Its crew released red smoke in the air and the Saltwater Cowboys drove the horses into the sea.

Morris managed the command and control of the event from the Chincoteague pier, with Hargis and his crews shooing boaters away from an emergency lane for rescue craft.

Hargis then nosed his boat toward the ponies to monitor their progress.

“I think there’s a pony that’s swimming into the boats,” Hargis said, holding his position with deft control of the throttle and the wheel.

And that’s when Hargis became a Coastie cowpoke, nudging the pony with his vessel to guide the scared creature toward shore.

"Have you seen this often," Hargis asked a nearby boat captain he'd worked for while in high school.

“Yeah, once about 30 years ago or so ― a couple got way off course and came ashore a ways over there,” the skipper said, pointing at an area a few hundred yards down the shore. “They went ashore down there and ran into town on their own, was a bit of excitement that day, for sure.”

And then it was all over.

The shore hands corralled the ponies near where they came ashore, holding them for about an hour before parading the herd through town to the auction.

But for the Coast Guard, the day was over. As the crowd thinned, Hargis and his crew headed home to their station, pausing only moments to watch the pony parade.

“We had a rogue pony and a bit of excitement at the end there,” Morris said during his post-operation brief at the station. “Other than the weather everything else went pretty smoothly — you couldn’t ask for anything more.”