The aircraft carrier Gerald R. Ford is now closer than ever to becoming an operational flattop.

The crew has taken charge of the first of the high-tech warship’s 11 Advanced Weapons Elevators and a second lift isn’t far behind in the building, testing and certification process, Navy officials say.

In fact, this year the Ford should have all 11 elevators working, according to an official announcement last week shortly before a visit to Norfolk by Secretary of the Navy Richard Spencer and James Geurts, the civilian leader in charge of the service’s research, development and acquisition programs.

Lawmakers on Capitol Hill grilled Guerts in November about the Ford’s elevators and other gadgets that have been bedeviled by gremlins since the carrier’s 2017 commissioning.

The Ford also has faced problems with its Advanced Arresting Gear and Electromagnetic Aircraft Launch System.

EMALS has long been a source of disgruntlement to President Donald J. Trump, who repeatedly has bashed the digital replacement to steam catapults.

But Pentagon officials insist that both EMALS and the Advanced Arresting Gear should be fully operational when the Ford returns to the sea this fall.

Why the Navy thinks the carrier Gerald R. Ford will work after all

The combination punch of good news at the Senate Armed Services' Seapower Subcommittee included testimony that the Navy has recorded significant cost savings during the building of the John F. Kennedy, the next Ford-class carrier, and is prepping to purchase two similar flattops in Fiscal Year 2020.

Navy officials say that the Ford’s new electromagnetic elevator design will move up to 24,000 pounds of ordnance at a rate of 150 feet per minute.

The cables and pulleys on Nimitz-class carrier elevators can move 10,500 pounds at 100 feet per minute.

“This will allow us to load more aircraft faster, and in the long run, increase our overall sortie generation rates,” said Lt. Cmdr. Chabonnie Alexander, the Ford’s ordnance handling officer.

The elevators are a key part of the layout and design of the Ford-class carriers. Along with moving the position of the island and the refueling stations, they’re expected to help boost both sortie rates and combat power.

The Ford’s designers set a goal of conducting sustained flight operations of 160 sorties per day for 30-plus days, with a surge capability of 270 sorties daily.

Nimitz-class carriers are expected to run 120 sorties daily over the same span with a surge capability of 240 per day. 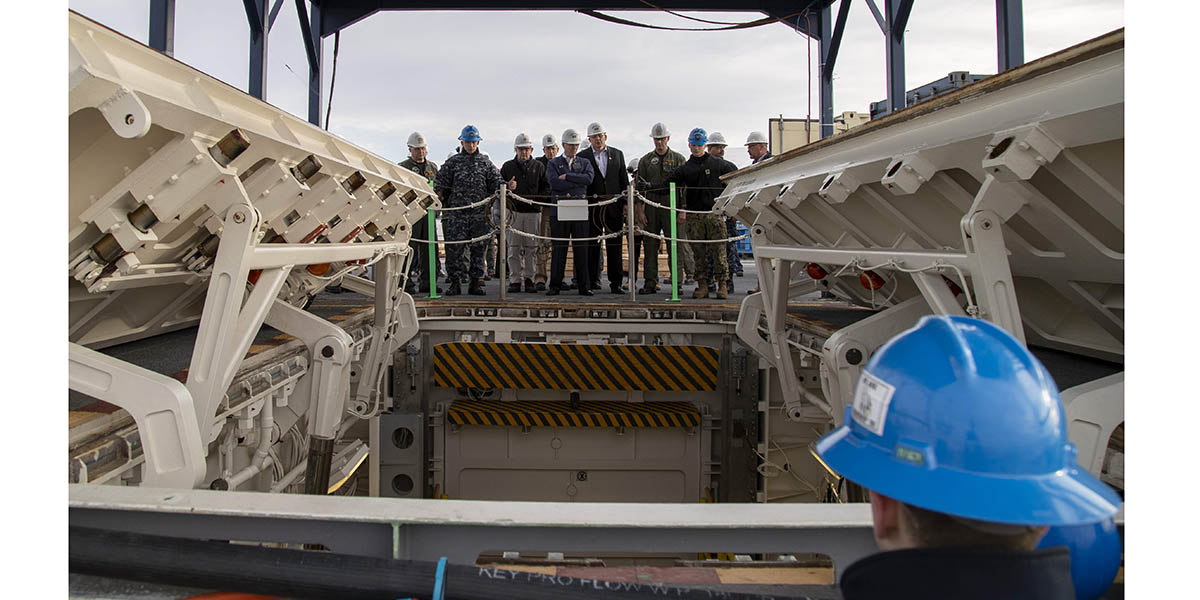 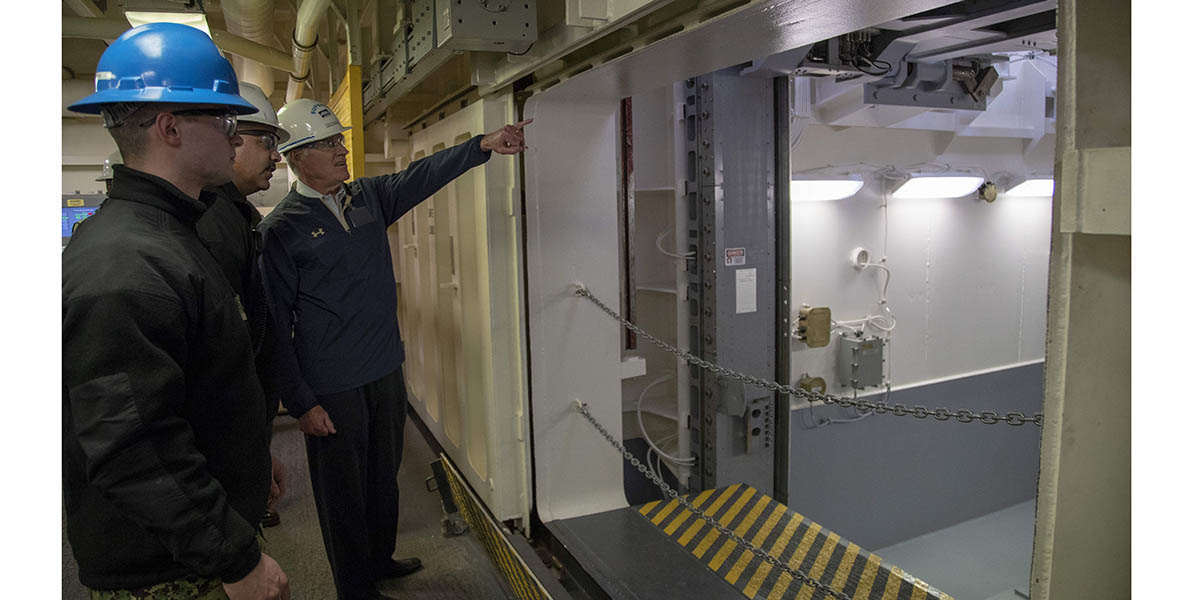 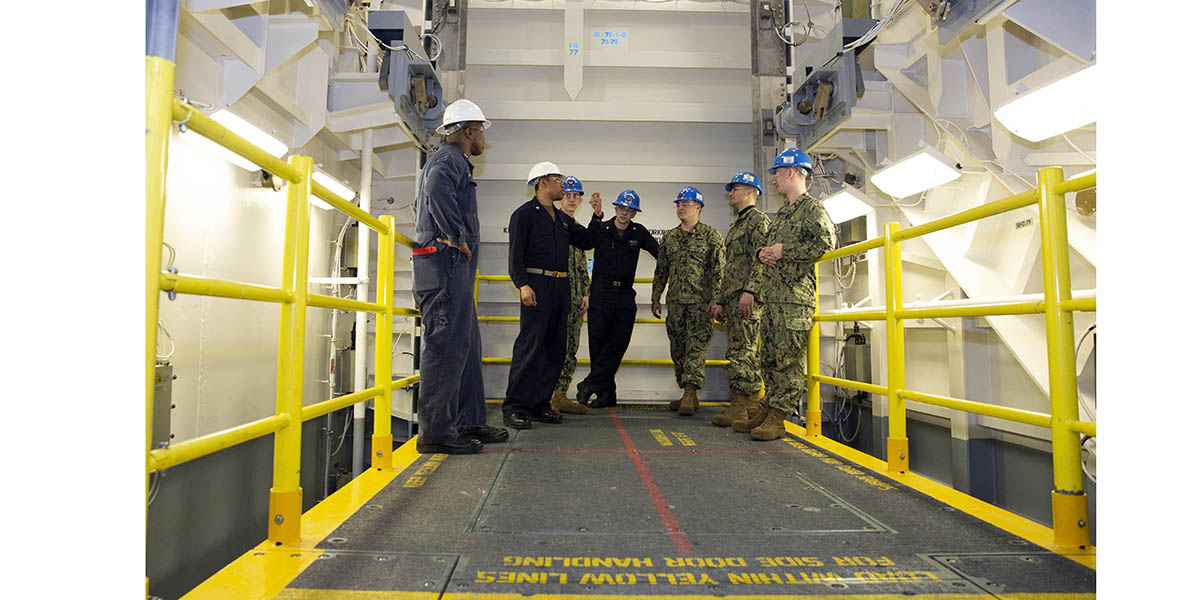 Called “Upper Stage #1,” the new elevator officially became the responsibility of the Ford’s crew on Dec. 21st after an engineering team from Huntington Ingalls Newport News Shipyard tested and certified it as operational.

It’s located in the forward weapons handling area on the 02 level, just below the flight deck, according to Lt. Cmdr. Anthony Falvo, the ship’s pubic affairs officer.

The Ford’s dedicated weapons handling area is situated between the hangar bay and the flight deck on the 02 level.

By placing it there, designers eliminated several movements necessary on Nimitz-class carriers and slashed the distance ordnance must travel from the magazine to the aircraft by 75 percent.

The Ford’s 11th elevator has been marked for “utility” use, which means it also can move other supplies to and from the flight deck and evacuate injured personnel to the hangar bay.

“This allows the 10 main AWEs and Ford’s three aircraft elevators to be dedicated to their primary missions of ordnance and aircraft movement during real-world operations,” Falvo said.

A new familiarization, operations and maintenance training program for the new elevators has kicked off and Lt. Cmdr. Alexander says his sailors are “100 percent invested in this, but there’s still work left to do" to get all the systems operational.

“To be able to finally push the buttons and watch it operate like it’s designed to do was a great feeling," he added.

The second in a two-part report on a Marine investigation into what caused an amphibious assault vehicle to sink last year, killing nine service members. Plus, an update on fighter sales in the Middle East, and a conversation with one of the highest-ranking transgender officers in the military on recent policy changes. That and more on Defense News Weekly for April 10, 2021.
Close
Now Playing