Inside the Fitzgerald disaster 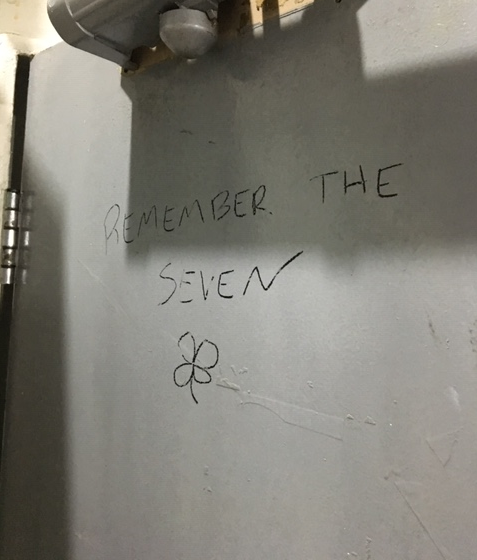 Graffiti aboard the warship Fitzgerald after seven sailors died in a June 2017 collision. (Photo provided to Navy Times)
2 of 9 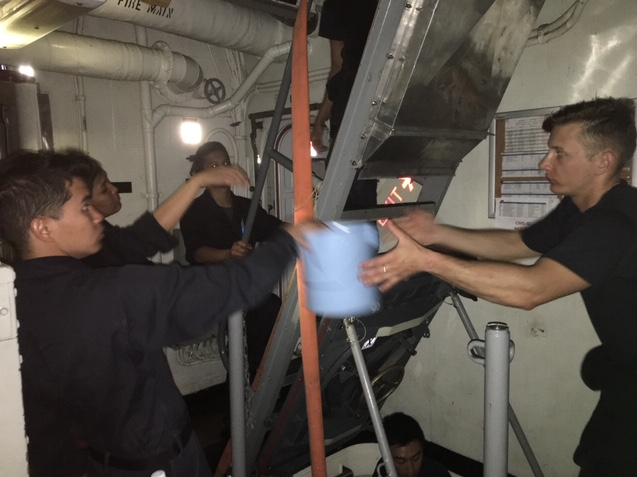 Sailors aboard the stricken warship Fitzgerald form a bucket brigade following the ship's fatal collision with a merchant vessel on June 17, 2017. (Photo provided to Navy Times)
3 of 9 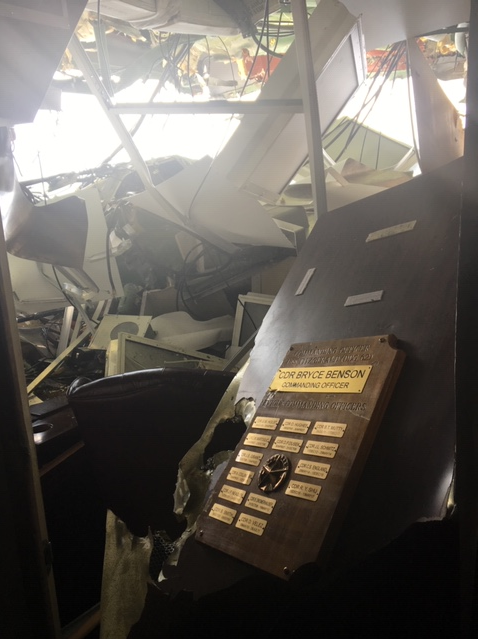 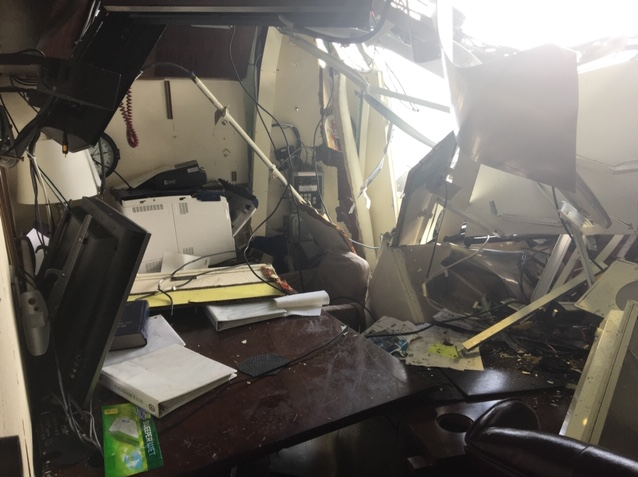 The damaged living quarters of the warship Fitzgerald's skipper, Cmdr. Bryce Benson, after a fatal collision in June 2017. (Photo provided to Navy Times)
5 of 9 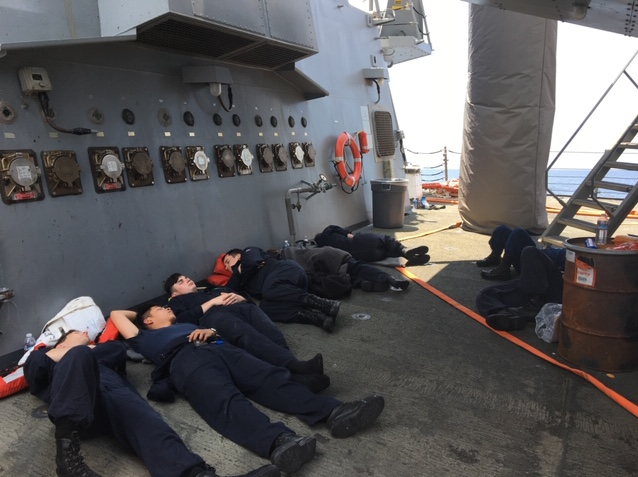 Sailors aboard the warship Fitzgerald rest as the ship makes its way back to land following a June 2017 collision that killed seven of their shipmates. (Photo provided to Navy Times)
6 of 9 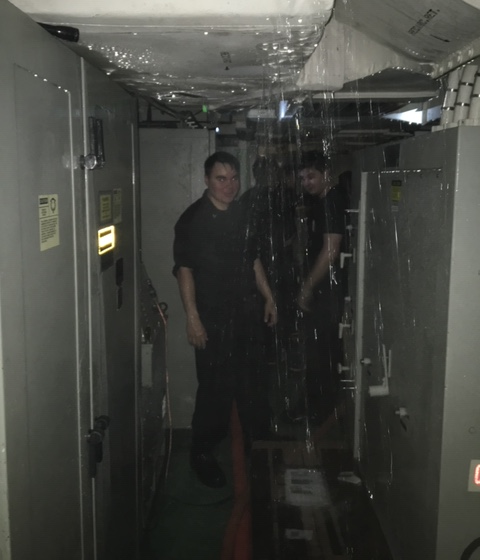 Sailors aboard the warship Fitzgerald as it made its way back to land following a fatal collision in June 2017. (Photo provided to Navy Times)
7 of 9 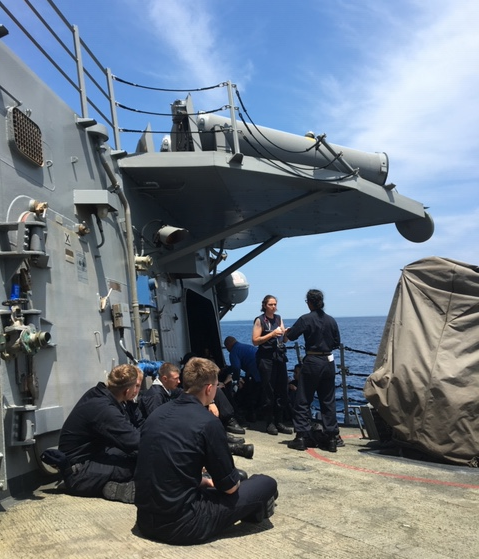 Sailors on the stricken warship Fitzgerald as it made its way back to land following a June 2017 collision that killed seven. (Photo provided to Navy Times)
8 of 9 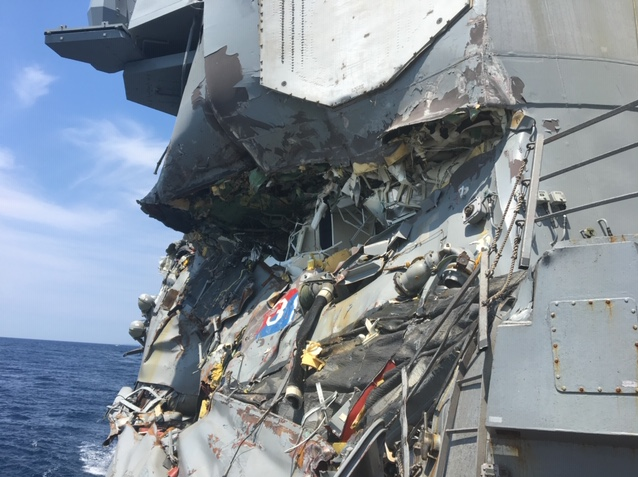 Damage aboard the warship Fitzgerald following its June 17, 2017, collision with a merchant vessel. (Photo provided to Navy TImes)
9 of 9 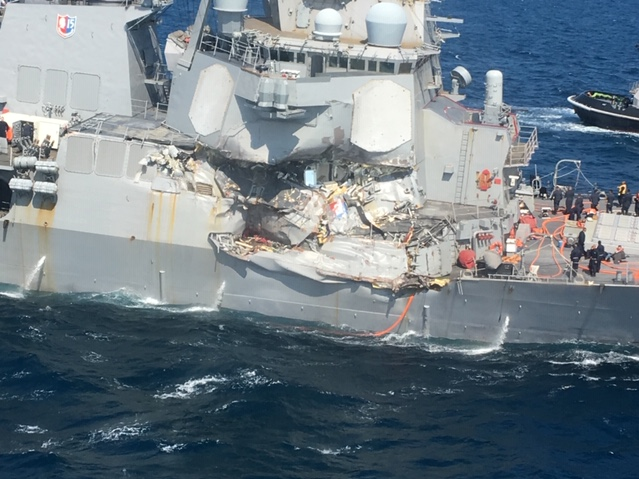 The stricken warship Fitzgerald as it makes its way back to land following a June 17, 2017, collision that killed seven sailors. (Photo provided to Navy Times)

After the bulbous bow of the massive cargo vessel ACX Crystal speared through the starboard side of the warship Fitzgerald, seawater surged through the gash and into Berthing 2, where he slept.

But it wasn’t merely the jolt from the impact or the rising flood that conspired to kill him.

It was a flotsam of lockers sheared away by the collision, bobbing and bumping into each other in the dark, blocking escape paths through already cramped confines and, at one point, trapping him underwater.

He was the last man out. Below him, seven shipmates drowned.

In an interview with Navy Times, the 28-year-old spoke of coping with post-traumatic stress disorder and survivor’s guilt, but his mind kept returning to those lockers.

In the nearly two years since the disaster on board the guided-missile destroyer, Mead said no Navy leader has explained how supposedly secured lockers came loose, much less detailed what the service will do to make sure the the problem isn’t repeated if another warship is struck, in combat or peacetime.

“That was one of the things that upset me most about the accident,” he said. “How are those lockers secured?”

Sailors who survived the 2017 fatal collision of the warship Fitzgerald say that detached lockers in Berthing 2 nearly doomed them. (Navy)

Mead’s concerns were echoed by other survivors who contacted Navy Times in the wake of a series of January stories that exposed the grim truth about problems plaguing the Fitzgerald both before and after it collided with the ACX Crystal off the coast of Japan.

Like him, they described lockers that weren’t bolted to the bulkheads but instead just riveted to the racks or bracketed to fixtures, but they can’t speak publicly without official authorization from their superiors.

Mead concedes that he’s not a marine engineer or naval architect, but he believes “there’s got to be a better solution to ensure safety for people who sleep down there.”

Although an official report compiled by the Navy mentions the lockers as part of the jumble of objects awash in Berthing 2 in the aftermath of the collision with the ACX Crystal, how they hindered escape wasn’t highlighted.

But a secret probe overseen by Rear Adm. Brian Fort and submitted to superiors 41 days after the 2017 accident goes deeper into the danger the lockers posed to Mead and his shipmates.

“The most significant impediment to (sailors) escaping Berthing 2 was the number of stand up lockers and racks which had broken free following impact and the onrush of seawater flooding the space,” Fort wrote. “Free-floating lockers and at least one dislodged rack obstructed the movement of (sailors) from starboard to port to egress.”

After the Fitz was drained of seawater, a post-collision analysis determined “that many Berthing 2 lockers had become unsecured, creating debris in the space,” Fort wrote.

Naval Sea Systems Command, or NAVSEA, “should review the damage to FTZ lockers and racks from this collision and assess whether performance was in accordance with design specifications," he recommended.

In the 21 months since the Fitz disaster, however, it remains unclear what, if anything, the Navy has done to remedy Fort’s concerns.

On Feb. 25, Navy Times submitted a list of written queries to officials about the lockers, including questions about how they were fixed to the destroyer and its furnishing and whether changes have been made to better secure them on other ships in the event of a collision.

“Unfortunately, I won’t be able to provide a response to this query,” said NAVSEA spokeswoman Colleen O’Rourke in an email sent to Navy Times nine days later. “Hopefully I will be able to assist you in the future.”

Later, Cmdr. Jereal Dorsey, another service spokesman, emailed that “the Navy routinely evaluates all aspects of shipboard life to ensure the safety and welfare of our Sailors.”

The stricken warship Fitzgerald as it makes its way back to land following a June 17, 2017, collision that killed seven sailors. (Photo provided to Navy Times)

What isn’t in dispute is that the Navy requires shipboard furniture that’s often very different from what civilians can buy in a store.

The material used for lockers and other furnishings routinely must be designed and manufactured to meet high standards for repelling fire, resisting corrosion and withstanding shock, while at the same time meeting cost and weight concerns, especially for combat ships, according to studies located by Navy Times.

NAVSEA directives guide the type of metal that’s used and how furnishings are bolted to a surface. Considerations often are made for sanitation, which is why some pieces are designed to stand at least six inches above a deck so that sailors can clean underneath them easily.

Depending on where a piece of furniture is located, it might be designed to withstand increased wear and tear, rolling in storm conditions, shipboard vibrations and even extreme shock.

How a piece is welded, latched, screwed or riveted to a surface also will be based on assumptions about how it can become dangerous, such as shearing off and turning into an airborne missile or tumbling off a mount onto an unsuspecting sailor.

But it remains unclear if the Navy has reassessed the design and material of below deck furnishings in the aftermath of the Fitzgerald collision or if officials have reconsidered the level of shock testing required for mountings in those spaces.

About to be medically discharged because of his near-death on board the Fitz, Mead told Navy Times that he raised questions about the lockers directly with Chief of Naval Operations Adm. John Richardson and then-Master Chief Petty Officer of the Navy Steven Giordano during a meeting in Japan shortly after the accident.

“They just told me they’d look into it," he said, recalling that the session with them lasted "less than 30 minutes.”

“It was kind of like, ‘We’ll be resilient,’” Mead remembered them saying. "Navy talk. Kind of talking us up, but it wasn’t anything significant, really.”

The guided-missile destroyer Fitzgerald making its way back to Japan on June 17, 2017, after a collision with a merchant vessel. (Photo courtesy Sean Babbitt)

Mead told Navy Times that he had been asleep for about two hours when the ACX Crystal struck.

He slept on the bottom rack near the starboard side, bunking with several of the sailors who drowned.

The collision knocked Mead against the bulkhead and then out of his rack. Seconds later, he remembered, a “big stream of water” rushed in from the starboard hole.

“But by the time I got up and got to the end of my aisle, I looked right at first because the closest exit was there…it looked like water coming in from the floor to the ceiling,” Mead said.

And that’s when Mead first noticed the lockers.

“The main thing I had to battle to get out of the bathroom was one of those lockers,” he said. “It actually came directly into the bathroom and would’ve pinned me against the wall if I hadn’t jumped on top of it.”

Mead said he made his way to port and was moving toward the hatch ladder when several other loose lockers blocked his way, the water rising by the second.

Fire Controlman 2nd Class Jackson Schrimsher later told investigators that a locker fell onto him as he tried to escape but Fire Controlman 1st Class Gary Rehm pushed him out from under it.

Rehm was the oldest and most senior sailor to die in Berthing 2. He was posthumously promoted to chief petty officer.

Mead recalls watching Schrimsher climb over the lockers and navigate the tight space between them and the overhead of the berthing on his way to the port escape.

But Mead was shorter and spent precious seconds trying to get himself over the blockage.

Rehm was behind him and pushed him up, Mead remembered.

“As soon as I got on top of the locker, the water filled the whole space and we were completely submerged,” he said. “I tried to take one last breath while I was on top of those lockers and I just breathed straight water.”

Mead couldn’t move and was pinned between the dislodged locker and the overhead and he figured he’d die there.

“That was the first time I had any type of thought,” Mead said. “Everything before was just a reaction.”

“I started thinking about my wife.”

Mead recalls that he kept thrashing and somehow grabbed an overhead pipe and yanked himself free. He estimates he still had to swim 15 to 20 feet to reach a ladder.

“The whole time I was moving to the exit, I was slowly breathing in water, like involuntary gasps,” he said.

He groped for a rung and then two sailors hauled him out. He slid across the deck and started coughing up water.

“When I looked back at the hatch, the water was only inches away from the top,” Mead said. “I was the last one to be pulled out.”

If the lockers hadn’t blocked the way, Mead believes more sailors could have escaped.

“It would’ve been more time for us to get out to the exit,” he said. “Because of that, Gary Rehm wasn’t able to get out.”

Mead remembered glancing at another sailor who was struggling in a back aisle among the racks. He said a fellow survivor described lockers jamming the narrow paths between the racks, too.

Mead wishes he could recall the face of another shipmate swept by the surge of seawater into a bathroom, deeper in than he went, or the sailor struggling in an aisle to get free.

“I can only imagine how hard it would’ve been to get out to the main aisle with all the lockers there,” he said.

In Japan, after the Fitz had been drained of seawater, Mead returned to Berthing 2.

Everything was in shambles, just like the night of the collision.

“You couldn’t walk in there,” he said. “You had to climb over lockers.”

Geoff is a senior staff reporter for Military Times, focusing on the Navy. He covered Iraq and Afghanistan extensively and was most recently a reporter at the Chicago Tribune. He welcomes any and all kinds of tips at geoffz@militarytimes.com.