The lift of the 588-metric ton island was just one of 155 total prefabricated sections of the ship that were built outside of the dry dock and then placed on the ship by large cranes at Huntington Ingalls Newport News shipyard .

The first prefab section was a piece of the carrier’s keel, which was fitted into place on Aug. 22, 2015. Although this kind of shipyard work has been done for the past few decades, the Kennedy has been built using more of these prefabricated modules than any other flattop to date.

Wednesday’s event took place on what would have been the late President John F. Kennedy’s 102nd birthday.

Placement of the island means that the carrier is 92 percent complete, officials said. 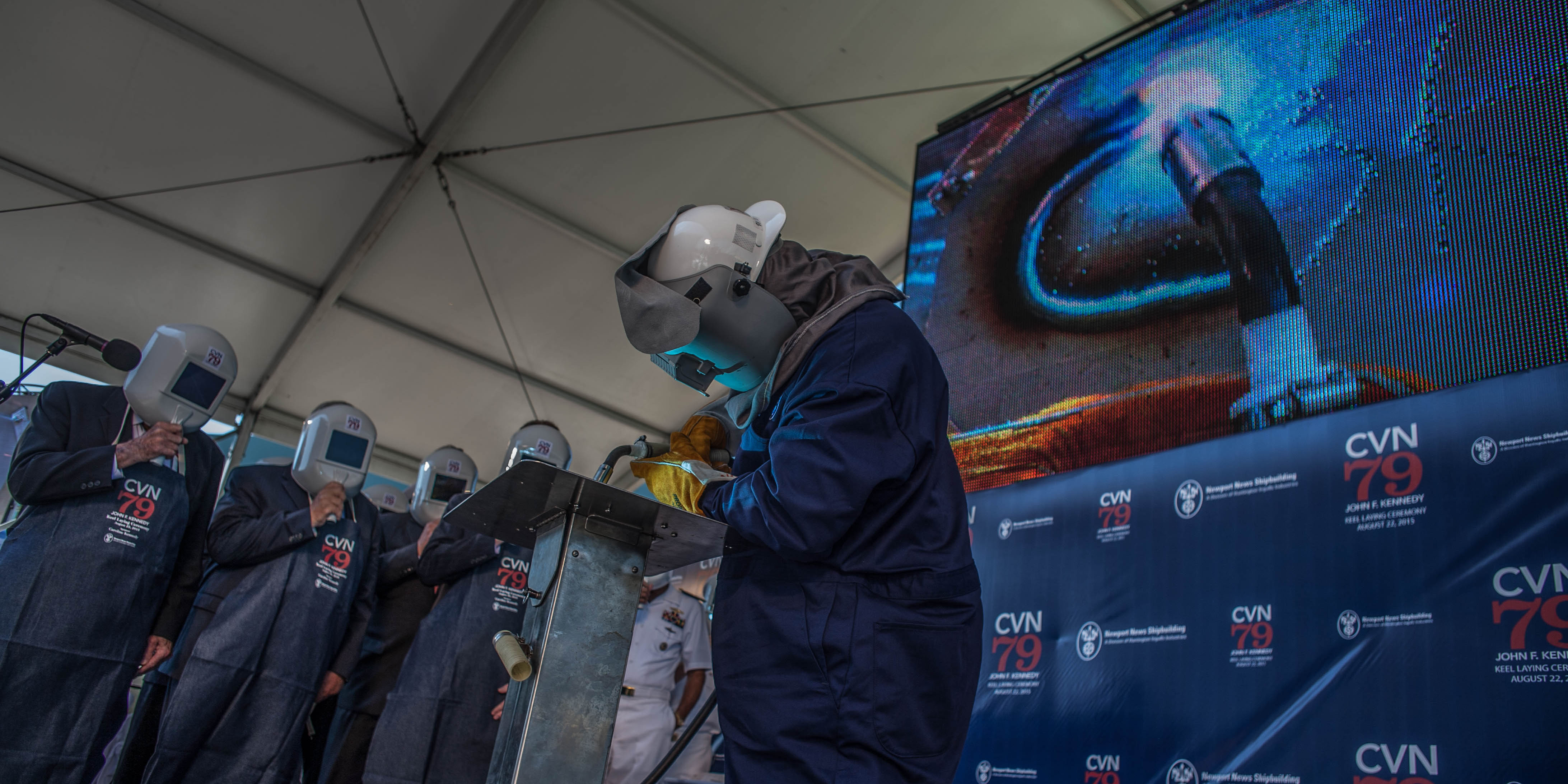 Huntington Ingalls welder Leon Walston places a weld bead over the initials of Caroline Bouvier Kennedy, daughter of the late President John F. Kennedy and the sponsor of the US navy’s next — and second Ford Class aircraft carrier. The ceremony was held at the Newport News, Va. shipyard, adjacent to Dry Dock 12. (Mark D. Faram/staff)
2 of 7 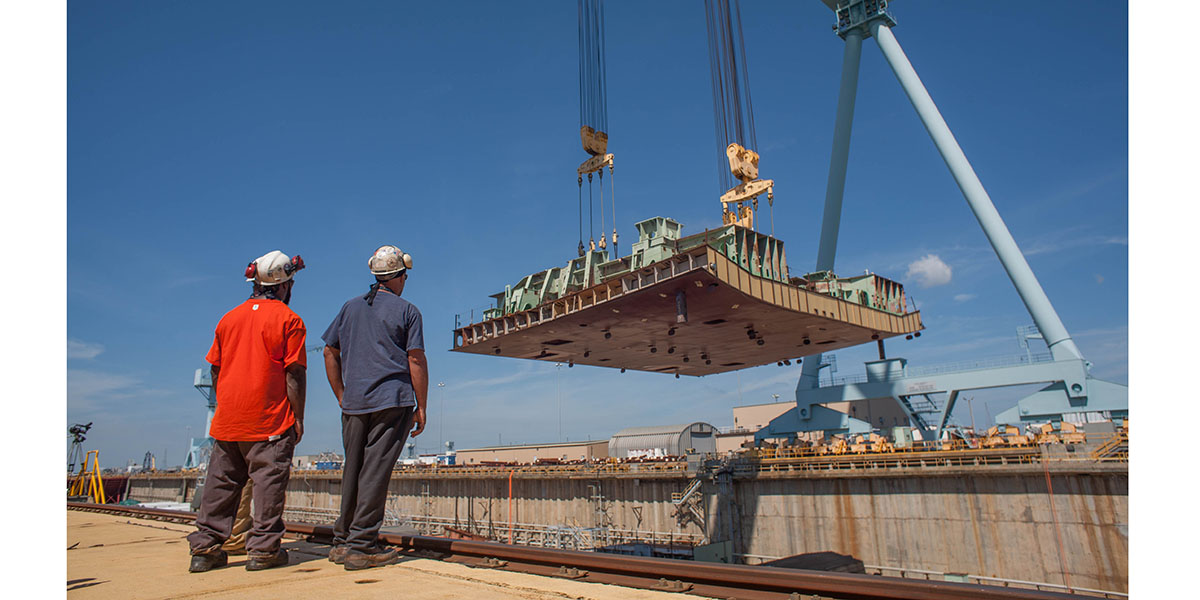 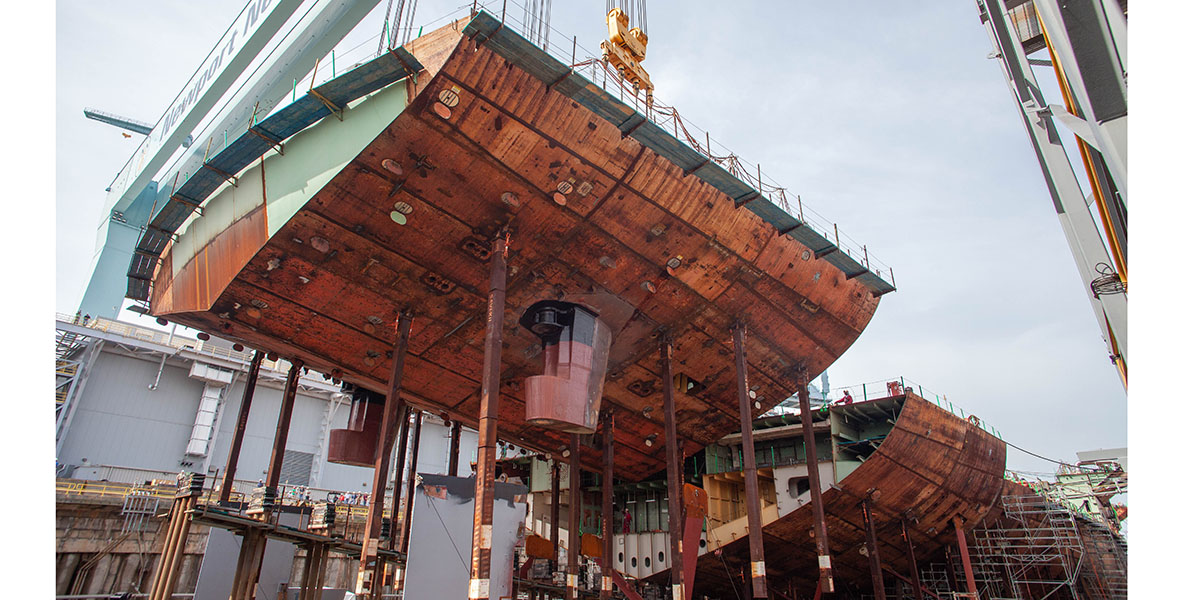 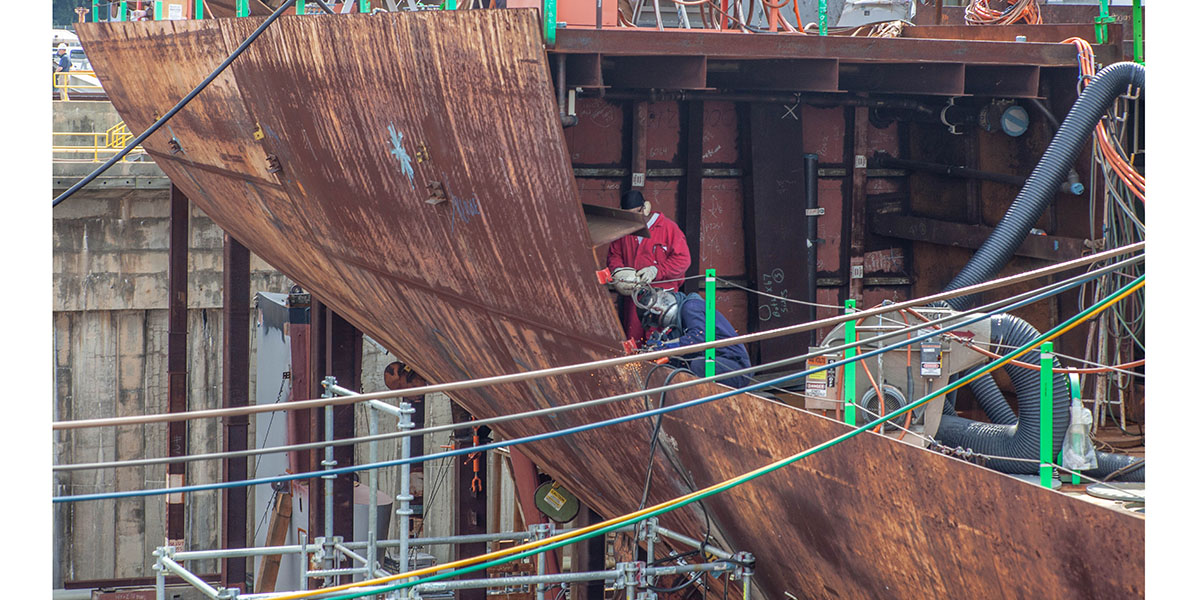 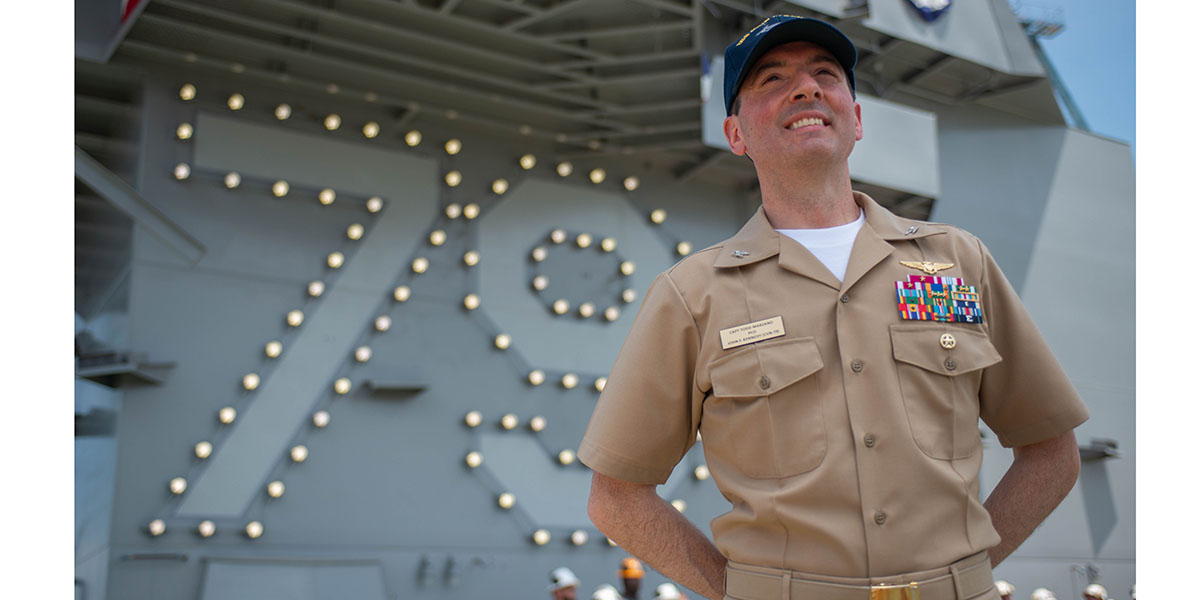 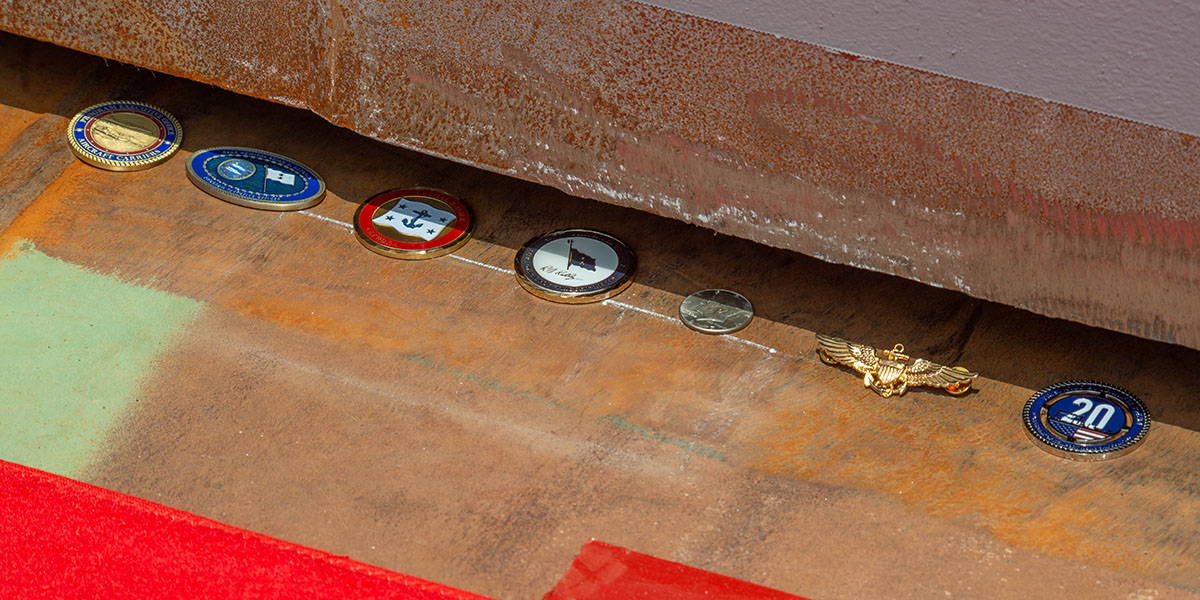 The gold aviator's wings of Capt. Todd "Cherry" Marzano and a silver Kennedy half-dollar are among the items in place before the island is placed and welded in place over them. (Mark D. Faram/staff)
7 of 7 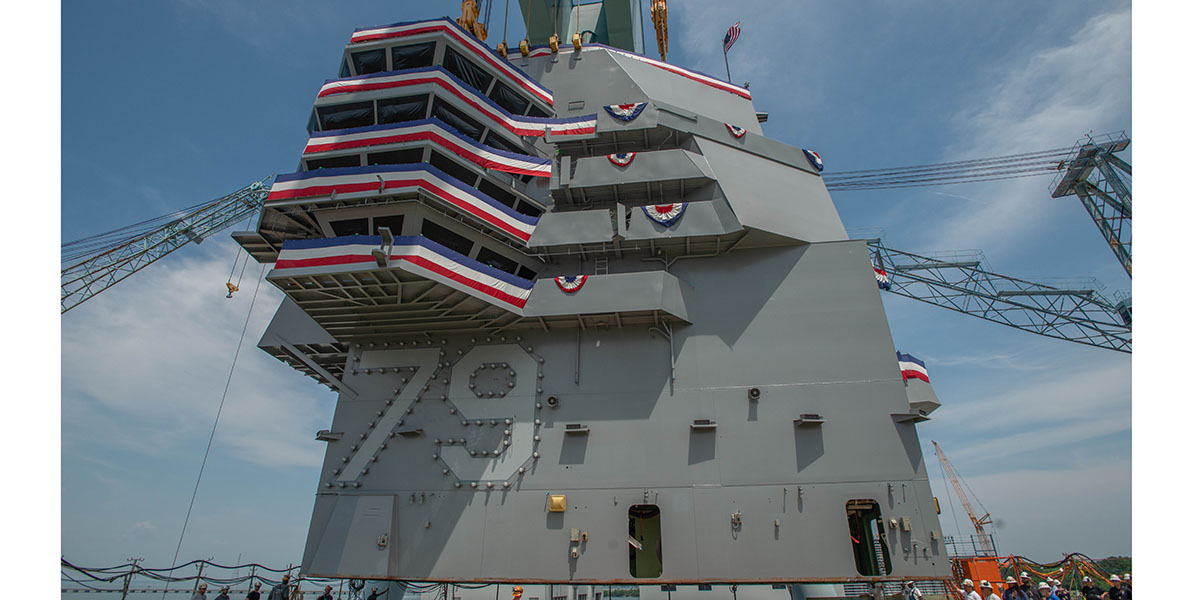 The island of of the new Ford-Class carrier John F. Kennedy hovers over the flight deck before being lowered and welded in place. (Mark D. Faram/staff)

The nuclear-powered vessel is expected to be christened later this year by the ship’s sponsor, Caroline Kennedy, the daughter of the late president and the former U.S. ambassador to Japan.

She also sponsored the first aircraft carrier named after John F. Kennedy, which was launched in 1968. The last carrier powered by conventional fuel, “Big John” was decommissioned in 2007.

The Kennedy will be the second Gerald R. Ford-Class aircraft carrier built for the Navy and is expected to be completed in the next couple years.

“In 2015, while driving past this very pier every morning en route where the Lincoln was moored, I observed the first sections of steel for the new JFK aircraft carrier being manufactured and prepositioned for assembly,” he said from the Kennedy’s flight deck.

During those commutes, Marzano recalled musing that “some lucky captain” would one day get the honor of becoming the new Kennedy’s skipper. He added how “extremely humbled and very grateful” he is to be the leader picked for the job.

Why the carrier Ford is delayed again

Placing the island on an aircraft carrier has become a modern day ceremony akin to a “stepping the mast” celebration.

In the days of sail, a ceremonial coin was placed below the main mast as it was raised into position. A career aviator, Marzano’s first set of gold aviators wings were placed with other ceremonial coins on the ship’s flight deck, and the island was lowered on them before workers welded it into place.

“They become a permanent part of the ship’s structure,” Marzano said. “And naval tradition promises this will provide good luck and safe passage.”

Marzano also said the gesture “symbolizes my personal commitment“ to building a crew “that is manned, trained and ready in all regards” to operate the flattop when it enters the fleet.

Next to Marzano’s wings as the island was set into place was what officials said was the first minted Kennedy silver half dollar, donated by Caroline Kennedy and accompanied with a message that was read aloud.

“I know how proud my father would be of the ship that will bear his name and the patriotism and dedication of all who will sail in her,” she wrote.

Lamenting that she couldn’t attend Wednesday’s ceremony, Kennedy said she’s looking "forward to joining you at her christening,” which officials indicated will occur in November.