By Jon Gambrell, The Associated Press

ABOARD THE USS GEORGE H.W. BUSH — American sailors watched as the first Revolutionary Guard vessels appeared on the horizon of the Strait of Hormuz, beginning a daylong face-off that has become familiar to both Iranian paramilitary and U.S. naval forces that pass through the narrow mouth of the Persian Gulf.

But these routine, if tense encounters may soon grow even more perilous. In this Tuesday, March 21, 2017 photograph, members of Iran's paramilitary Revolutionary Guard watch the USS George H.W. Bush as it travels through the Strait of Hormuz.
Photo Credit: Jon Gambell/AP
President Trump has warned that Iranian forces will be blown out of the water if they challenge U.S. naval vessels, while American commanders describe the Guard as increasingly behaving unprofessionally with rocket launches and provocative actions. Iranian hard-liners, still smarting over the nuclear detente with the West, may see a military confrontation as a way to derail moderate President Hassan Rouhani heading into the country's May presidential election.

What happens next could hinge on the Strait of Hormuz, through which a third of all oil trade by sea passes.

"What reason were they to be in an international corridor, other than to harass us?" Rear Adm. Kenneth Whitesell, commander of Carrier Strike Group 2, said of the Iranian actions. "Was today the day they were going to come out and potentially deploy kinetic actions against us?"

Whitesell oversees the strike group that has the USS George H.W. Bush at its heart. The Nimitz-class, nuclear-powered carrier left her homeport of Norfolk, Virginia, on Jan. 21 — Trump's first full day in office. Its passage through the strait closes a roughly three-month gap in which America had no aircraft carrier in the Persian Gulf. A similar gap happened in the fall of 2015 — the first for the U.S. since 2007. 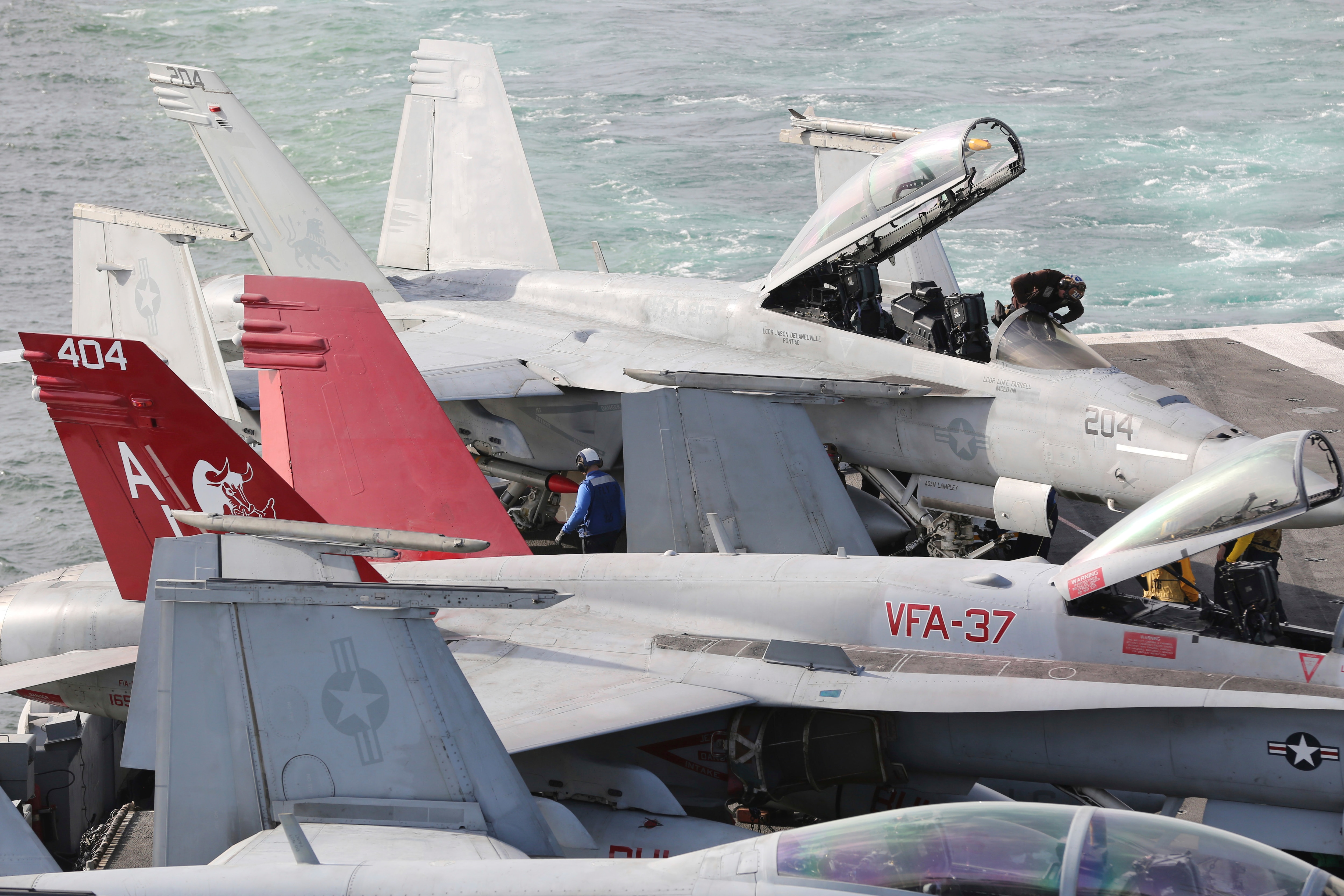 In this Monday, March 20, 2017 photograph, the pilot of an F-18 fighter jet cleans his aircraft on the USS George H.W. Bush as it travels toward the Strait of Hormuz. The arrival of the nuclear-powered aircraft carrier to the Persian Gulf marks the first such deployment under new U.S. President Donald Trump.
Photo Credit: Jon Gambell/AP
Its overall mission is providing a base for airstrikes against the Islamic State group. The ship's contingent of F-18 fighter jets began bombing the extremists in February as the vessel transited through the Mediterranean Sea.

But serving as a counterbalance to Iran and assuring America's Gulf Arab allies in the region also remains vital, Whitesell said. While acknowledging that Trump and Defense Secretary Jim Mattis have strong suspicions about Iran, he said there hadn't been any change in his orders in how to deal with the Islamic Republic.

"The political aspect of the United States has kind of been in our wake," the rear admiral said. 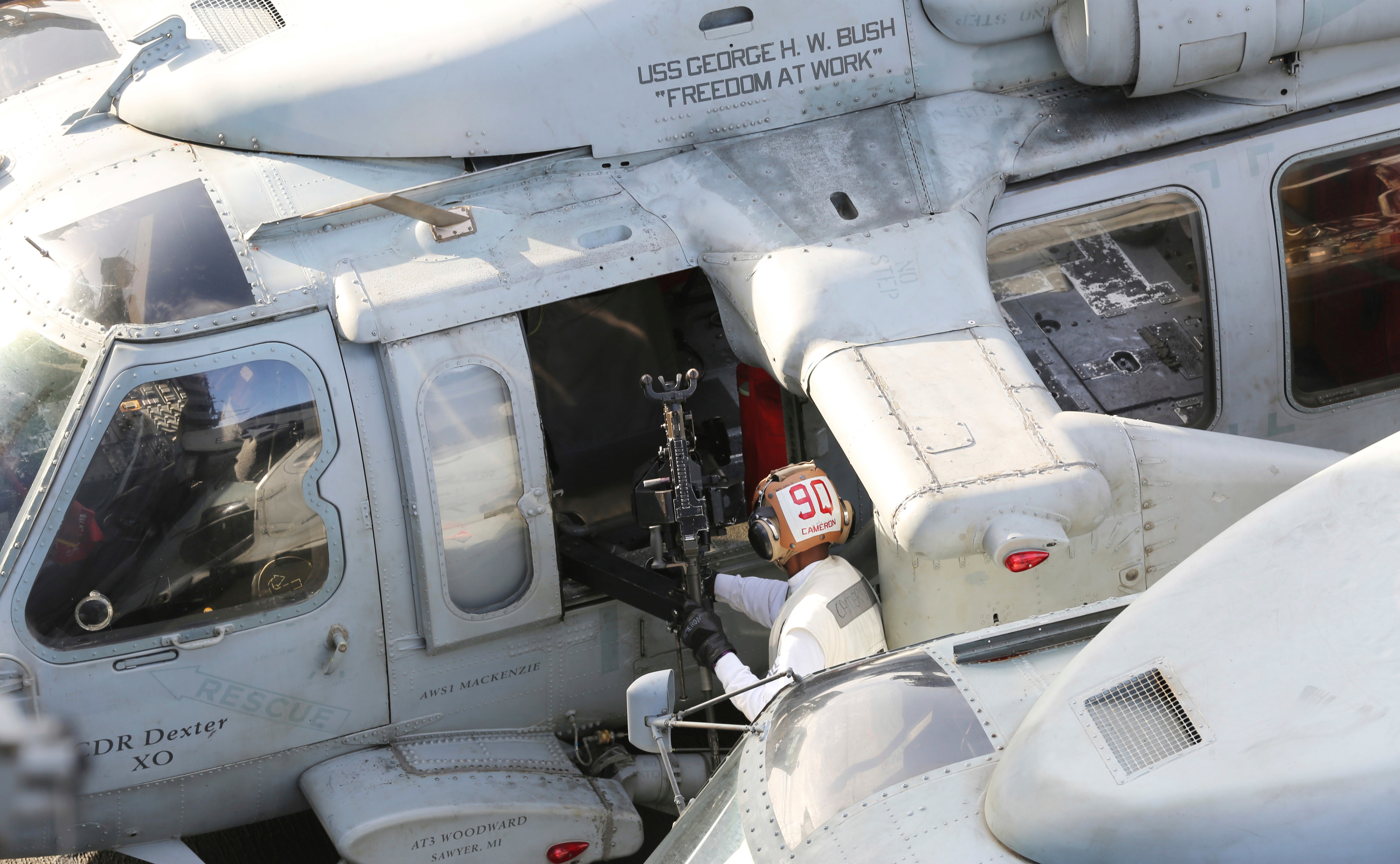 In this Monday, March 20, 2017 photograph, a crew member examines a machine gun on an MH-60 helicopter on the USS George H.W. Bush as it travels toward the Strait of Hormuz.
Photo Credit: Jon Gambell/AP
Threats, however, remain. After a Saudi naval vessel came under attack from a purported "drone" boat off the coast of war-torn Yemen, in the Bab al-Mandeb Strait in the Red Sea, U.S. vessels in this strike group changed their routine to protect themselves while passing, said Capt. Will Pennington, the commanding officer of the Bush.

"Some of our escort ships arrived in advance of us and provided security in that Bab al-Mandeb and a few lagged a few days behind so our coverage of that area was extended," Pennington said. "That same threat could exist here in the Strait of Hormuz or any other strait."

Small vessel attacks also include the October 2000 boat-borne bombing by al-Qaida on the USS Cole, which killed 17 American sailors while the ship was refueling in Yemen's Aden harbor.

The worry grows for U.S. officials as the Navy recorded 35 instances of what it describes as "unsafe and/or unprofessional" interactions with Iranians forces in 2016, compared to 23 in 2015. Before this week, there had been six, said Lt. Ian McConnaughey, a spokesman for the U.S. 5th Fleet, based on the nearby island of Bahrain.

Of the incidents last year, the worst involved Iranian forces capturing 10 U.S. sailors and holding them overnight. It became a propaganda coup for Iran's hard-liners, as Iranian state television repeatedly aired footage of the Americans on their knees, their hands on their heads. 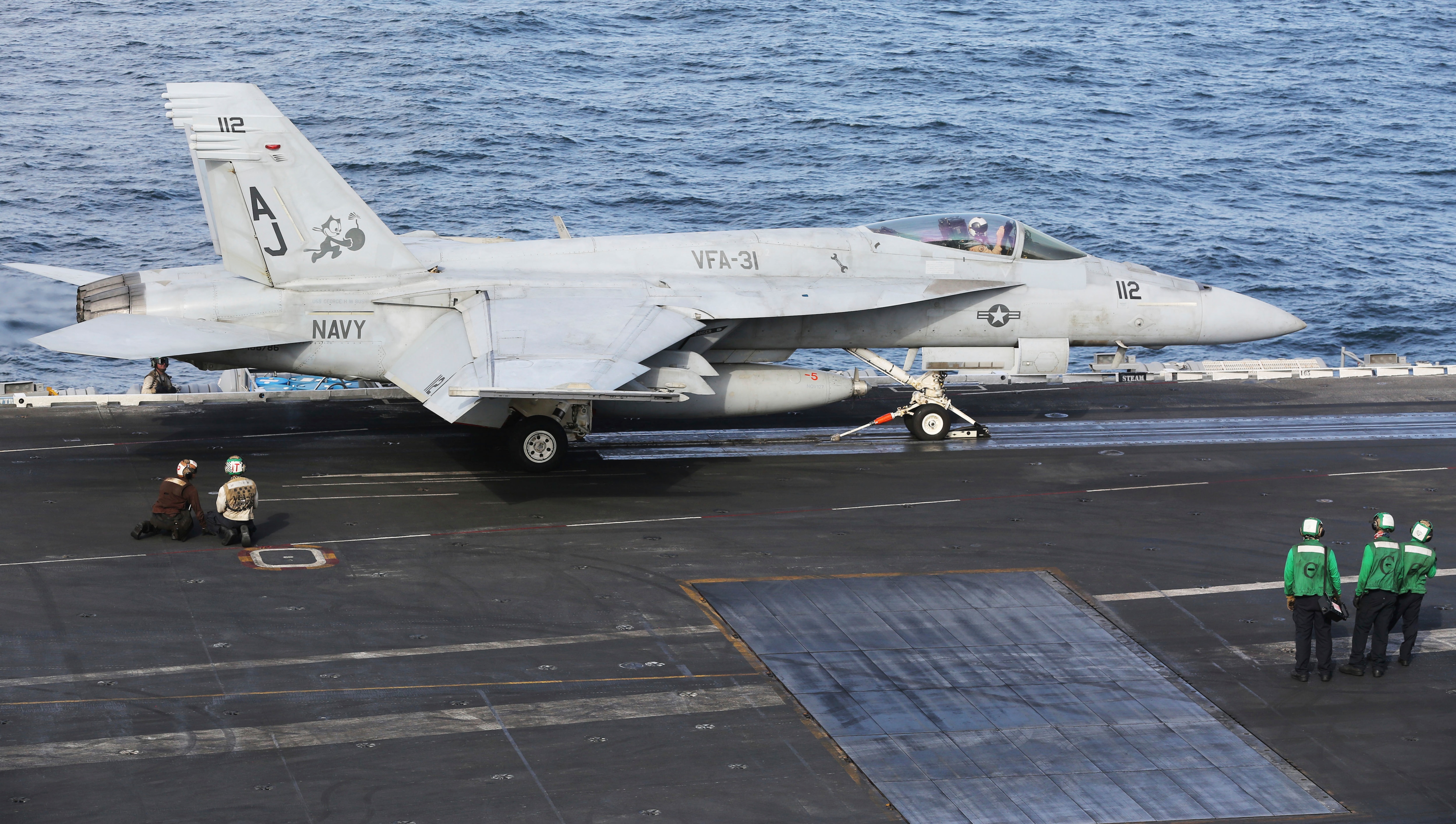 In this Monday, March 20, 2017 photograph, the pilot of an F-18 fighter jet salutes as he prepares to take off from the USS George H.W. Bush as it travels toward the Strait of Hormuz.
Photo Credit: Jon Gambell/AP
Iranian forces view the American presence in the Gulf and especially the Strait of Hormuz as a provocation by itself. They in turn have accused the U.S. Navy of unprofessional behavior.

At dawn on Tuesday, the Bush and its strike force entered the strait, which at its narrowest point is 33 kilometers (21 miles) wide, in the waters between Iran and Oman.

A Rihanna song playing over a loudspeaker on the deck was quickly cut off at the first sighting of Iranian vessels.

Iranian authorities demanded the Americans leave the area, though both the U.S. Navy and a nearby Omani warship said the strike group was in Omani waters.

The Iranians had speedboats and other craft, several displaying the Kalashnikov-rifle emblem of the Revolutionary Guard. U.S. helicopters circled overhead as some of the Iranians used telephoto lens and video cameras to film the carrier — while international journalists invited onboard the Bush filmed them.

On the bridge, a sailor called out: "There's nine. Reports of weapons being loaded."

But the Iranians merely stood alongside their machine guns, coming at their closest some 860 meters (940 yards) from the carrier as armed American sailors kept watch.

Hours later, the carrier exited the strait and entered the waters of the Persian Gulf, leaving the Iranians behind.

Still, Whitesell rated the day's danger a 7.5 out of 10, due to fog and other issues compounding the possible threat the Iranian vessels posed.

Minutes later, Whitesell excused himself to return to the bridge. More Revolutionary Guard boats had emerged from the fog.