But the warship will make a small detour before heading off on a tour slated to last seven months.

First, the McFaul must sail south to Naval Station Mayport in Florida to conduct a gunnery exercise, her final evaluation before departing overseas.

“You’re going to head south when you get underway and do that last basic phase event, the naval surface fire support event and then head east on deployment,” Rear Adm. John F. “Oscar” Meier, the commander of Carrier Strike Group 10.

Meier told the crew over the vessel’s loudspeaker prior to their departure.

Calling McFaul’s crew “the absolute best” because they are “extremely well-led, well-trained and well-manned,” Meier said he wished he could go with them.

“You are going to have a great, great deployment. That’s all,” Meier said. 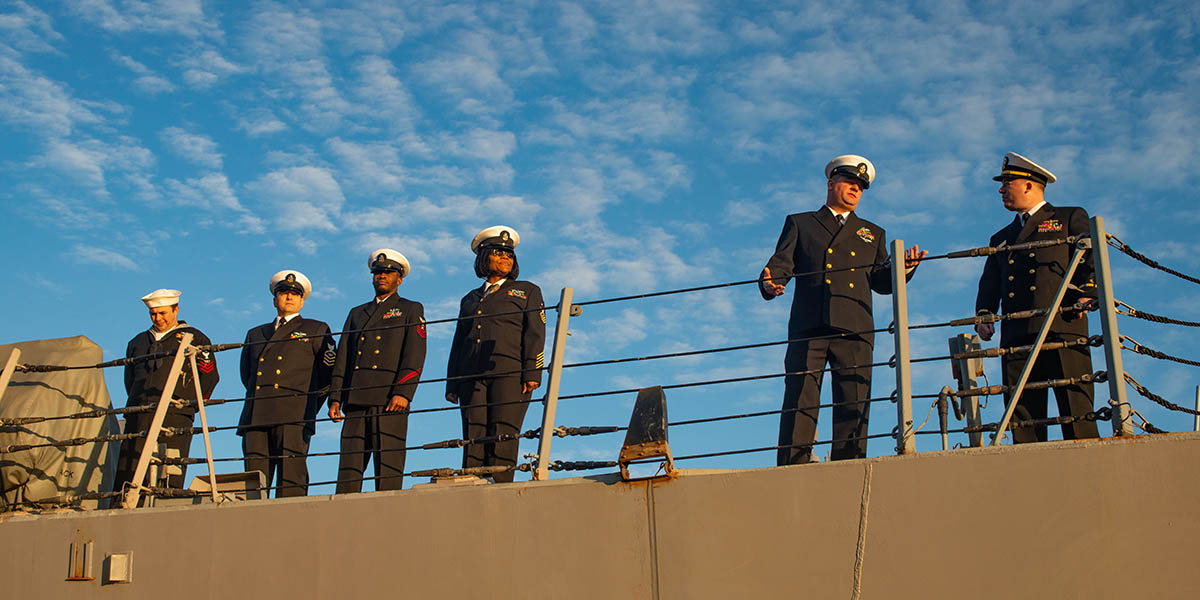 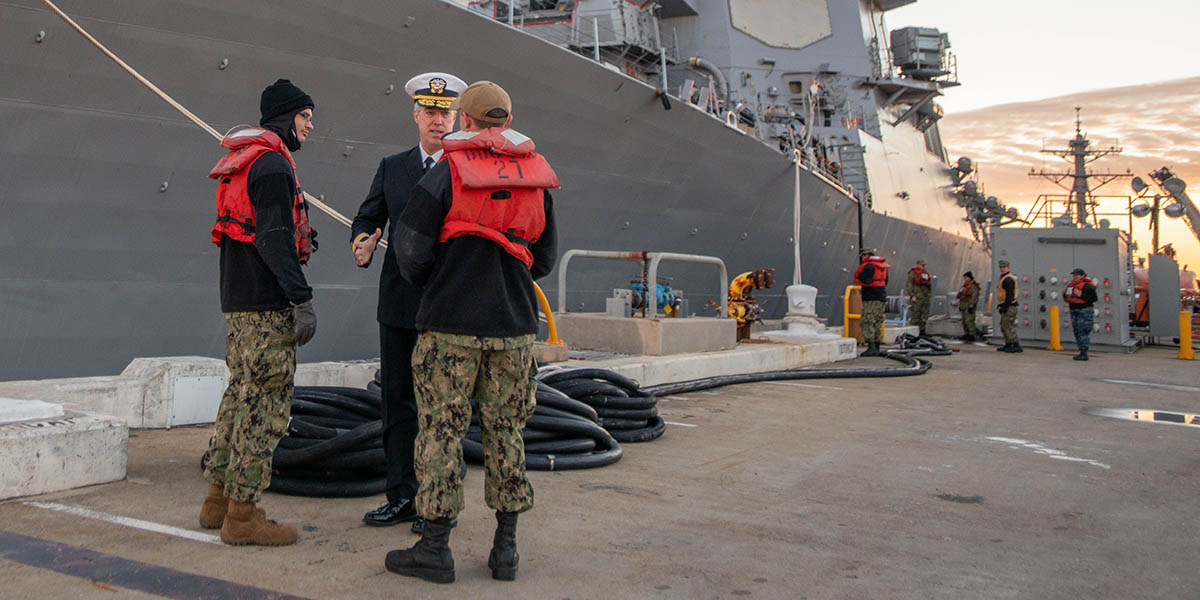 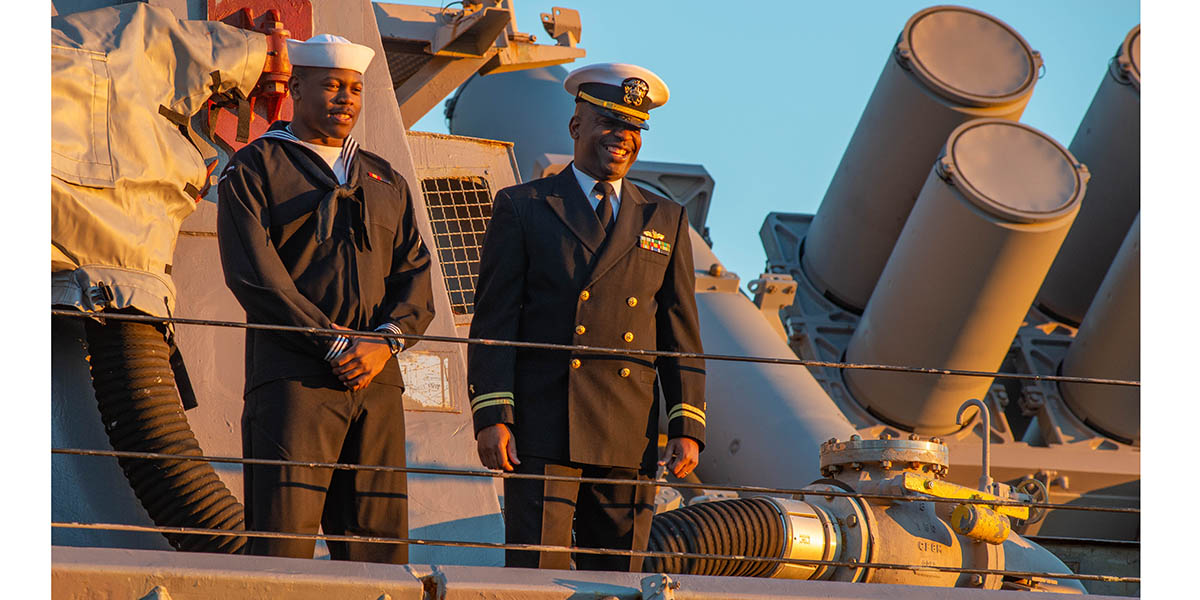 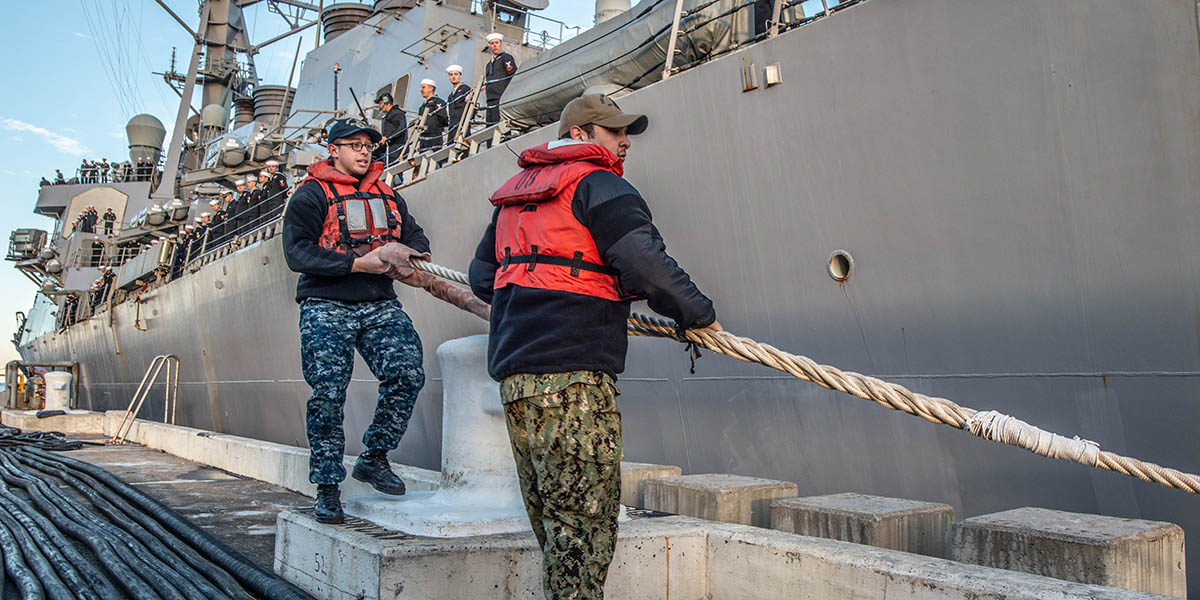 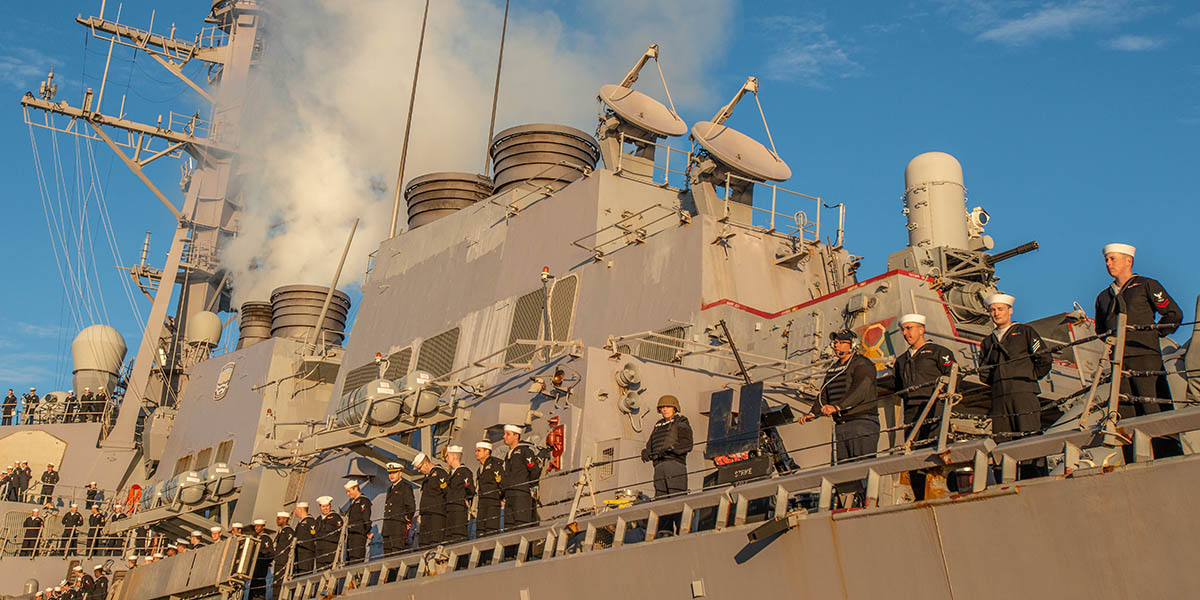 Naval Station, Norfolk - As the engineers kick up the turbines below, the crew of the the guided-missile destroyer McFaul, pack every available space on the ship's port side as it pulls away from the pier. (Mark D. Faram/staff)
6 of 9 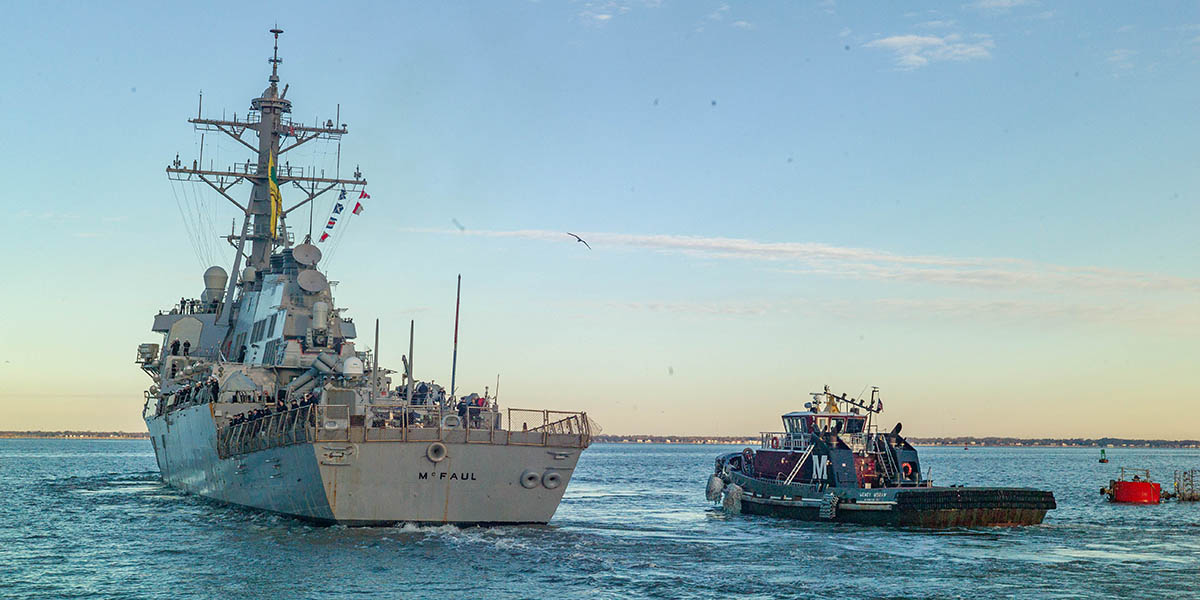 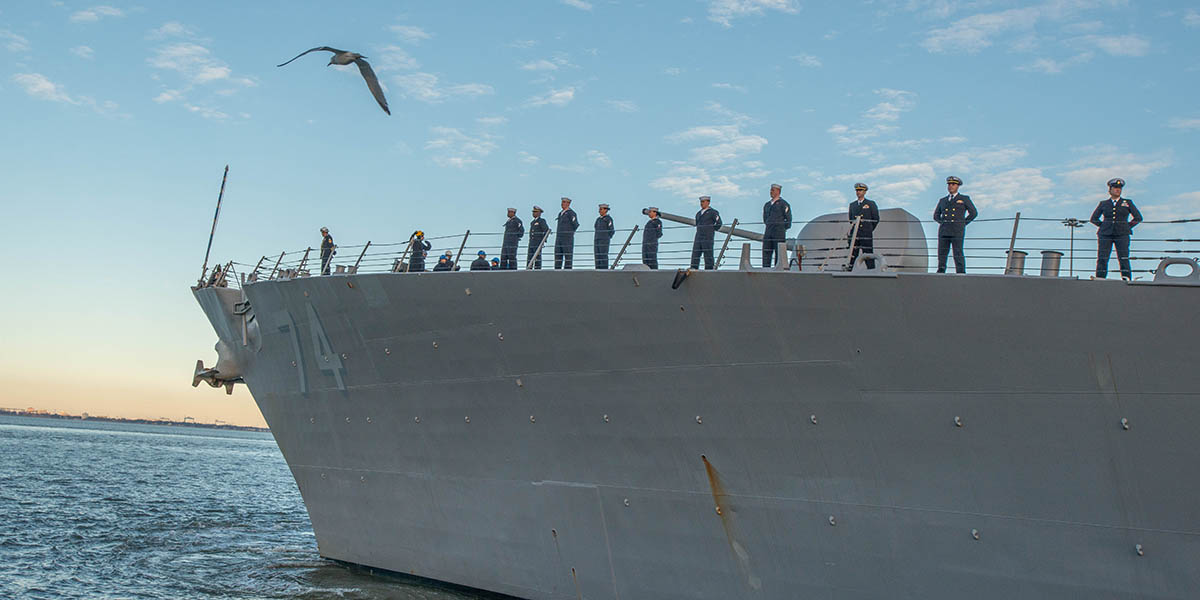 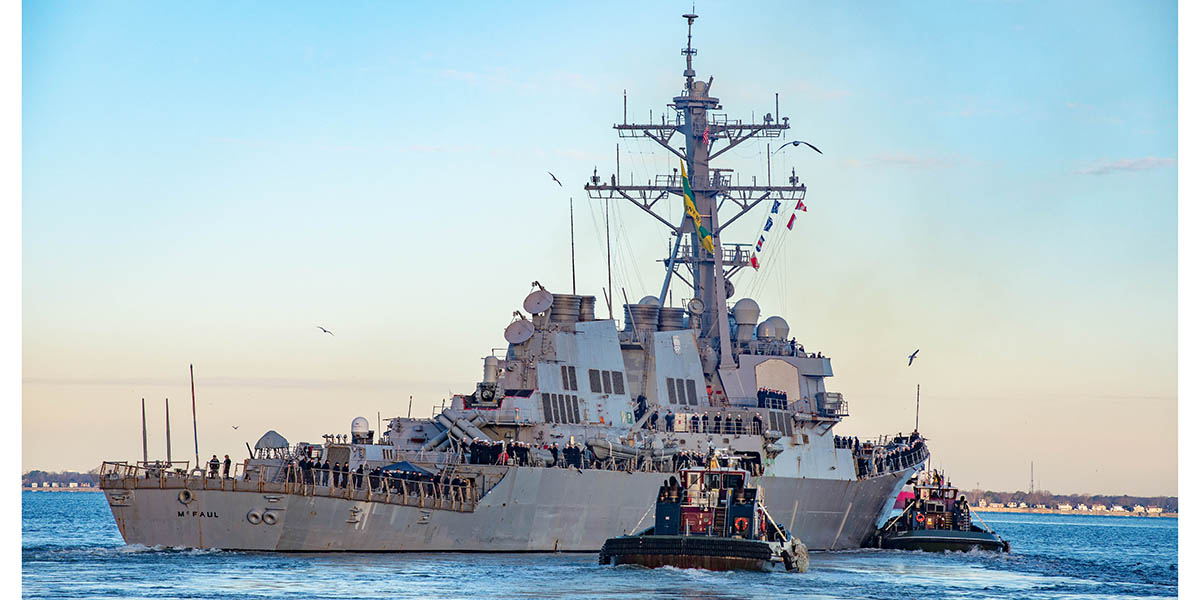 Naval Station, Norfolk - With tugs alongside, the guided-missile destroyer McFaul, now in the Elizabeth River heads to the Chesapeake Bay.(Mark D. Faram/staff)
9 of 9 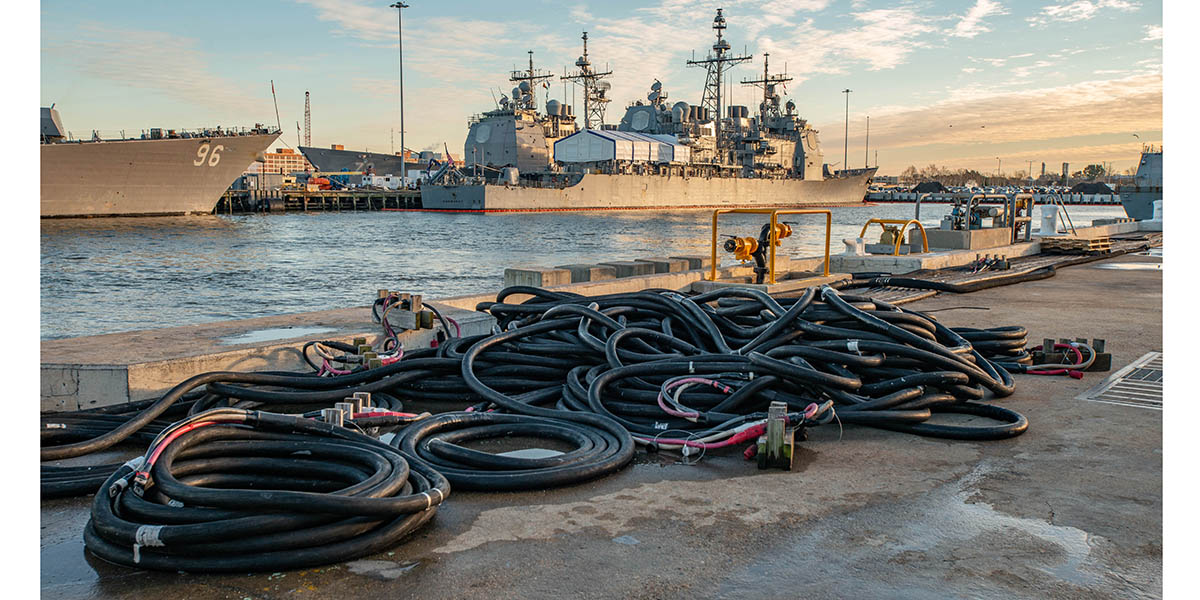 McFaul’s mission to Mayport and then abroad wasn’t exactly unexpected. The destroyer returned over the weekend after five days at Naval Weapons Station Yorktown, where Hampton Roads warships go to pick up ammunition.

As an independent deploying warship, McFaul leaves trained and ready to conduct a wide range of tasks, including ballistic missile defense, officials said.

“The ‘Silent Warriors’ of McFaul are strong, focused, resilient and self-sufficient, which is critical as we sail independently,” said Cmdr. Janet Days, McFaul’s commanding officer. “I am exceptionally proud to lead this team of Navy professionals. And, rest assured, when called upon, McFaul will be ready!”

It’s the first regular overseas deployment for McFaul since she returned from an eight-month independent cruise in 2015 through waters patrolled by the 4th, 5th and 6th Fleets.

In 2017, the McFaul underwent extended maintenance at the BAE Systems Norfolk Ship Repair yard before sailing briefly to the United Kingdom for NATO’s Formidable Shield Exercise, making stops in Portugal and Spain before returning home.

Its historic deployment over, what does the Truman Carrier Strike Group do now?

Sunday ended what admirals on the Norfolk pier and inside the Pentagon agree was a successful implementation of the Dynamic Force Employment plan created by Defense Secretary Jim Mattis to shake up the Navy’s carrier strike group deployment schedules.

Since Days took command on Nov. 9, the destroyer has been prepping for overseas duty — when the warship wasn’t helping out other vessels marked for deployment.

Along with the McFaul’s certification events, the destroyer participated in the Harry S. Truman Carrier Strike Group’s composite unit training exercise — COMPTUEX — as well as the final certifications for the Iwo Jima and Kearsarge Amphibious Ready Groups.

The 24th destroyer in the Arleigh Burke class, the McFaul was commissioned on April 25, 1998 and is named for Chief Engineman (SEAL) Donald L. McFaul.

The chief petty officer of Golf Platoon, SEAL Team 4 during the Dec. 18, 1989 battle for Panama’s Paitilla Airfield, McFaul sacrificed his own life to save a fellow SEAL.

When most of his 1st squad fell wounded in a firefight near an aircraft hangar, McFaul abandoned the safety of his position to reach a helplessly exposed SEAL in the kill zone.

Carrying the SEAL while under constant fire, McFaul was mortally wounded as he neared his team’s defensive perimeter, according to the citation for his Navy Cross, which was awarded posthumously for his selfless valor.

China's growing global influence and military expansion has many experts looking at what a war with China looks like. Military Times reporter Todd South walks through how a conflict with the Chinese may start and what it would mean for each branch of the armed forces.
Close
Now Playing

The end of tanks? A midair collision and napping for lethality — The Briefing 10.8.20