The Navy is vowing a “full court press” to overcome delays and finally field all the Advanced Weapons Elevators needed by the aircraft carrier Gerald R. Ford.

“We have a full court press on the advanced weapons elevators,” said Jim Geurts, the assistant secretary of the Navy for research, development and acquisition in a Monday press release.

With only two of Ford’s 11 elevators operating — and no firm schedule for delivering the remaining nine — the Navy brought a “team of experts” from both the government and private industry on board the Ford to fix the snafus, according to Geurts.

The sea service also announced Monday that officials will build a pair of testing facilities to help engineers fix problems and prep sailors to operate and maintain the elevator technology.

“Getting the doors and hatches installed was not enough. There has been learning on the sequence of building them,” Hernandez said.

He said that operations must be checked and rechecked to ensure they’re “working according to specs,” as when the elevators need to maintain “holding water tightness” as they move through the decks.

“Doors and hatches have to be moving in the right sequence and as you’d expect. They have to be aligned,” Hernandez said. “Mr. Geurts feels once we get the uppers and lowers working, it’s just a matter of improving efficiency.”

Guerts told Congress in March that Ford’s expected yearlong post-shakedown maintenance availability would be extended three months. That will delay the carrier’s return to sea until October.

Officials wanted all the elevators operating before heading back to sea so the Navy could begin to fully test the $13 billion Ford’s flight deck capabilities.

On Monday, Geurts indicated that the team of experts, working with Huntington Ingalls Industries, will find “the most efficient timeline possible” for getting Ford’s elevators to work.

They will identify systemic problems and “recommend new design changes” for the installation of the elevators on board other Ford-class carriers, he added.

CNO Visits Ford in the Yards 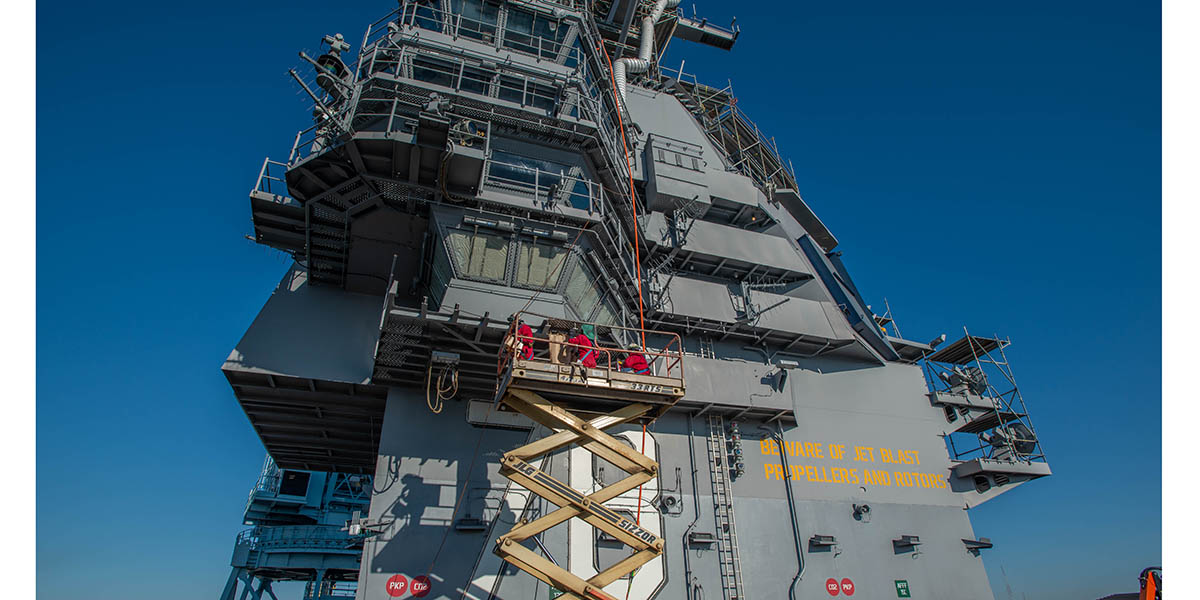 The island of the next-gen carrier Gerald R. Ford gets worked on by shipyard workers. (Mark D. Faram/Staff)
2 of 8 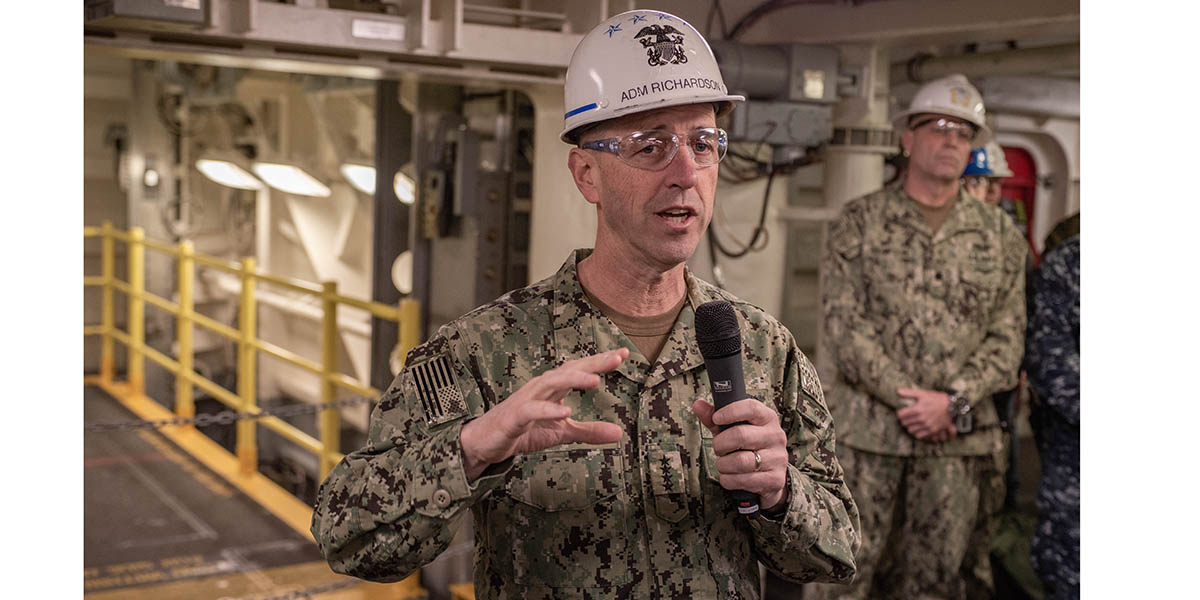 Chief of Naval Operations Adm. John Richardson talks to the media in front of one of the the Ford's new weapons elevators (Mark D. Faram/Staff)
3 of 8 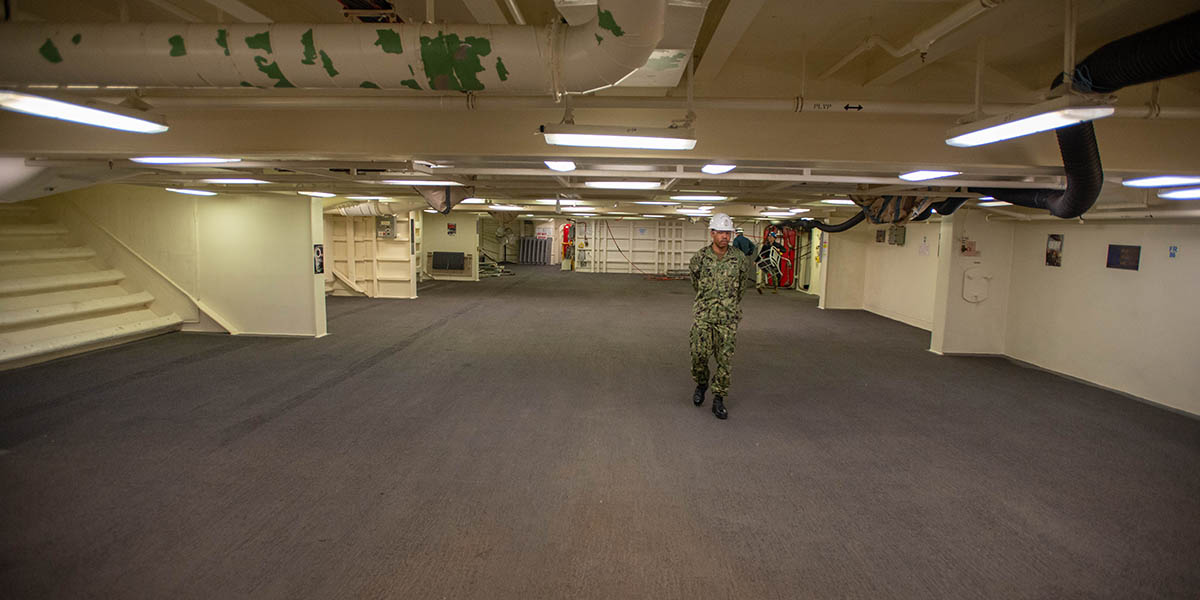 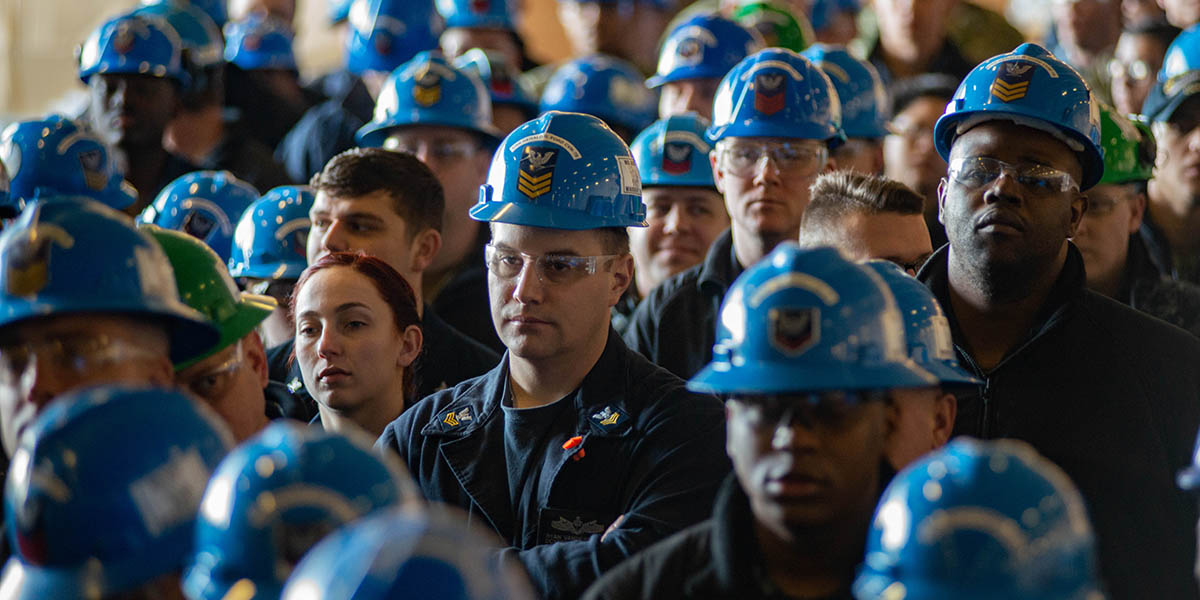 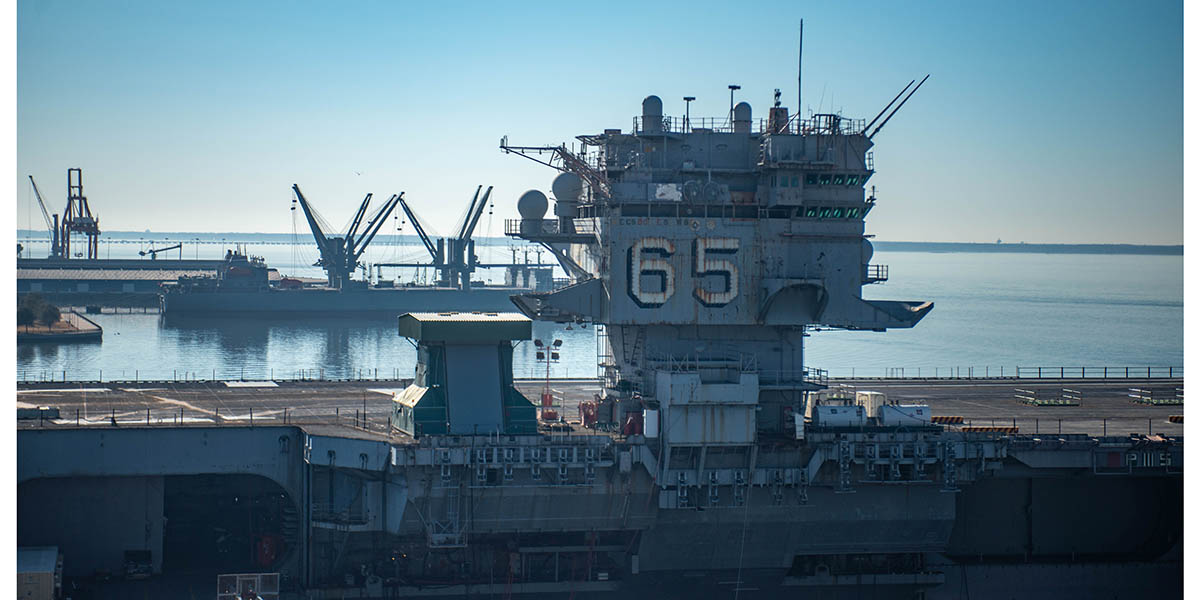 The rusting hulk of the aircraft carrier Enterprise is tied up next to the next gen carrier Gerald R. Ford (Mark D. Faram/Staff)
6 of 8 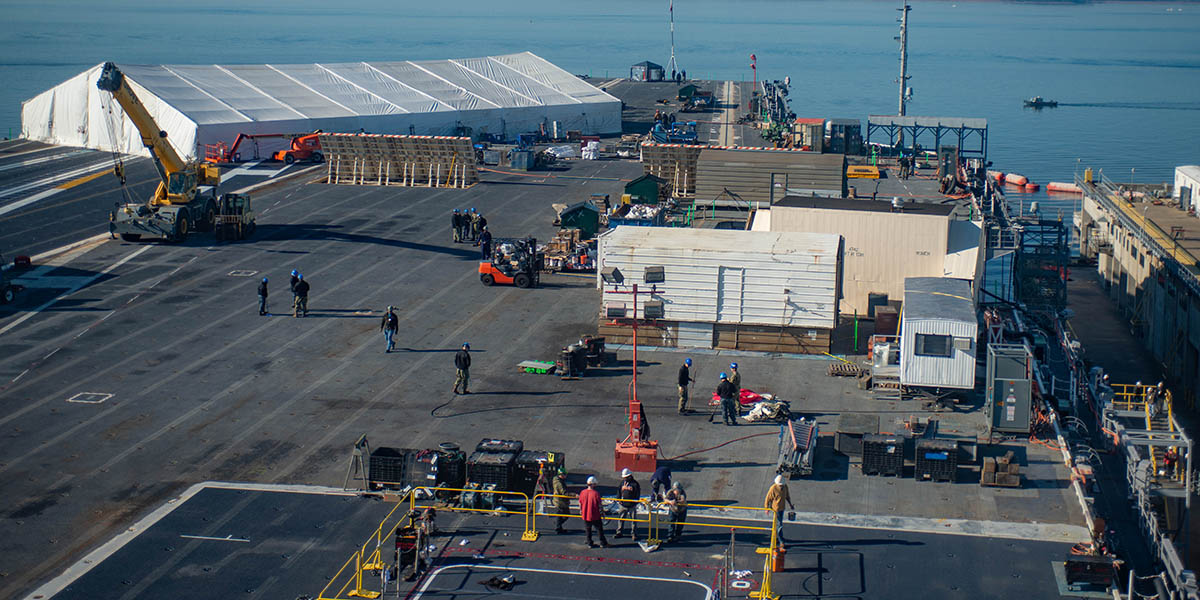 The flight deck of the next-gen carrier Gerald R. Ford is getting extensive work while the ship is in the yards. (Mark D. Faram/Staff)
7 of 8 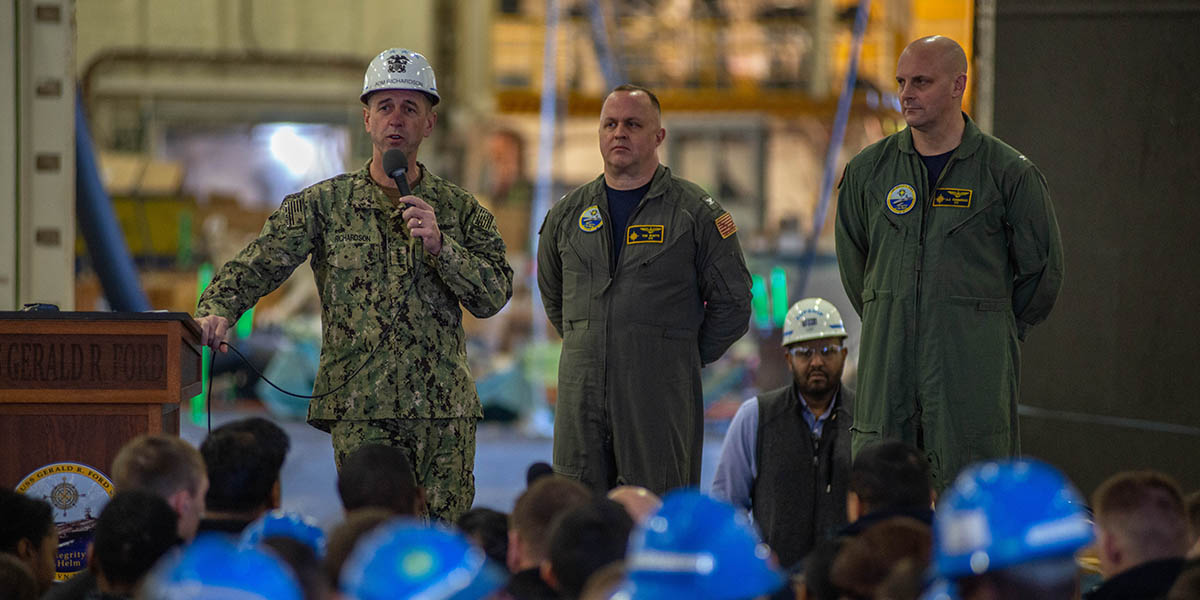 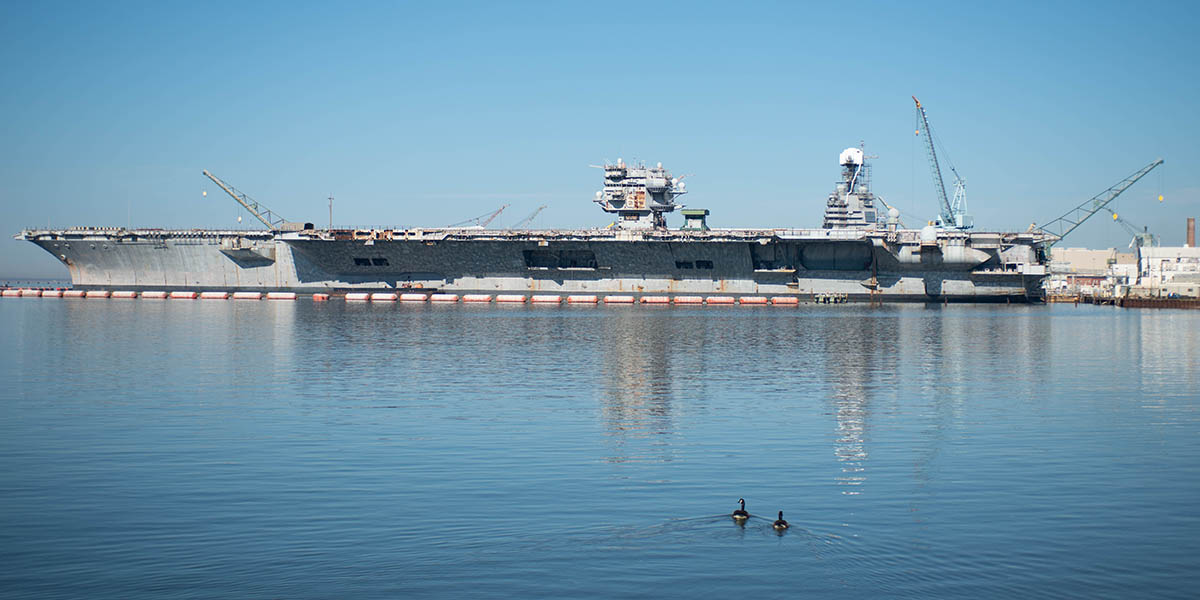 The island of the next-gen carrier Gerald R. Ford (r) peaks up over the rusting hulk of the aircraft carrier Enterprise. (Mark D. Faram/Staff)

If the team can get the elevators to work in concert with Ford’s revolutionary arresting gear and electromagnetic catapults, officials hope to hike the number of aircraft sorties by 33 percent compared to the previous Nimitz class of warships.

Ford’s elevators rely on electromagnetic technology instead of cables and pulleys.

Why the carrier Ford is delayed again

"You have to decide: what is the right thing to do?" | Dear Young American — Gary Beikirch

Battles are first fought and either won or lost in our hearts and our minds, says Medal of Honor recipient Gary Beikirch. You have to decide, what is the right thing to do? What is it that I need to do to succeed? By stepping out of your comfort zone, you come to understand a meaning to life that those that never leave their comfort zone will ever understand, Beikirch says in the latest installment of "Dear Young American."
Close
Now Playing

The future of security operations in Afghanistan